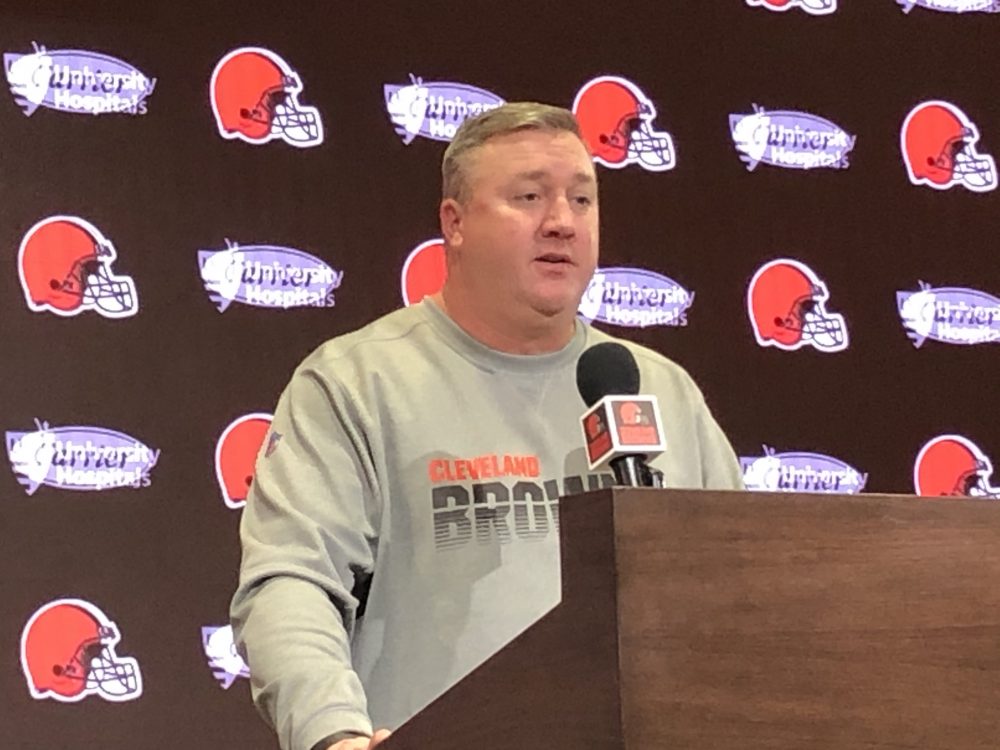 Van Pelt raved about Mayfield’s competitiveness and skill set but wants him to fix his feet.

“I have a belief and a philosophy of footwork, and it’s extremely important to me — Kevin, as well,” Van Pelt said Wednesday, referring to coach Kevin Stefanski. “It all starts with the feet. The feet never lie. They get you through your progressions.

“So just some of the ways that we’ll have him drop both from under center and in the gun will change slightly to help him.”

Van Pelt, who was introduced at a news conference, said he’ll reverse Mayfield’s stance in the shotgun. Instead of Mayfield starting the play with his right foot ahead of the left, he’ll begin with his right foot behind. He told him to practice at home.

“I’ve had success with coaching that and I think that, in my opinion, is the way to go for a quarterback,” said Van Pelt, who was a backup quarterback for the Bills from 1995-2003. “We’re going to switch him to left foot up and see how he likes that because, to me, that allows a quarterback to play with more rhythm. It’s quarterback junkie talk, but it’s something I believe in.”

Van Pelt said he made the change with Andy Dalton and Ryan Finley as Bengals quarterbacks coach in 2018-19. He previously coached quarterbacks for the Bills, Buccaneers and Packers, including working with two-time MVP Aaron Rodgers.

“It’s not hard. I’ve been in touch already and just said, ‘Hey, think about putting your left foot up. Just do it in your living room,’” Van Pelt said of Mayfield. “You work through it and you feel more comfortable with it and then it becomes habit like anything else.”

He believes it helps in the quick passing game.

“There’s more rhythm. It’s not as robotic. It’s more fluid,” Van Pelt said. “I’ve always used the term I want the feet to be like Mozart and not like Metallica, if that makes sense, and not to say that he is. But with the footwork, it’s just a fluid motion. You’re really back there dancing through the pocket as you go through your progressions.”

Van Pelt, 49, was a coordinator once before, for the Bills in 2009. Stefanski has yet to decide if he or Van Pelt will call plays in 2020, and Van Pelt said he was comfortable either way. They didn’t know each other before the interview process.

“It is really something we are just going to work through,” Van Pelt said. “Not having worked with Kevin in the past, I am sure he needs a comfort level with me as a coordinator.”

Van Pelt made it clear he’ll take a hands-on approach with Mayfield, who ranked 31st in the NFL last season with 21 interceptions, a 59.4 completion percentage and 78.8 passer rating. The Browns won’t have a quarterbacks coach.

“Yes, my plan is to be the voice in the room, and I think that’s very important,” Van Pelt said. “One of my strengths as a coach is coaching the quarterback, so I definitely want to make that part of my job responsibility.

“Absolutely. Absolutely. He’s obviously a skilled player, a talented player. I love the fire and the passion in his game,” Van Pelt said. “It’s our job as an offensive staff to help him and make him successful. Everything starts around the quarterback on the offensive side of the ball. We’ve got to put him in the best position for him to have success, and that’ll make us all better.”

Van Pelt and Mayfield have talked multiple times since he got the job. The offseason training program begins April 6.

“I loved him coming out of college,” Van Pelt said. “Most of the great quarterbacks I’ve had a chance to be around were extremely competitive to the point where they would try to beat you at darts or pool — it did not matter — and I see that in his game. And that’s exciting.

“And obviously he has the skill set — the talent, the arm, throwing the ball on the move to escape pressure, all those things. I think the future’s bright.”

He’s looking for better decision-making so Mayfield can cut down on the interceptions, and set 64 percent as the bar for completions. Stefanski has said he’ll make life easier for Mayfield by using a strong run game and play-action passes to create open throws.

Van Pelt said he’s also met with receivers Odell Beckham Jr. and Jarvis Landry, who both eclipsed 1,000 yards in 2019 despite dealing with season-long injuries. He expects them to be more precise in their routes.

“You have to be at the right place at the right time every time as a receiver,” Van Pelt said. “The freelancing is not a big part of the system. I think there are times that you will do that to get a little creative, but the quarterback needs to know when those times are and things need to time up. The footwork, the timing of the feet and where you are in the progression is a big part of the system.

“It is our job to help them be positive leaders, and that is what I think both guys want to do.”