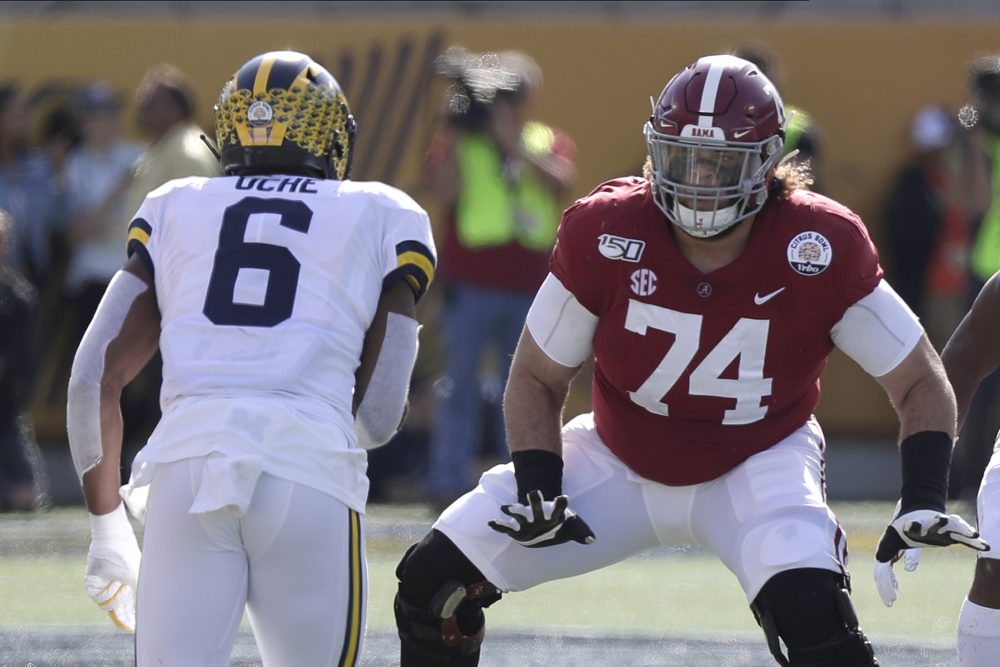 Andrew Berry will have piles of scouting reports and data to consider before he makes his first draft pick as general manager of the Browns in April.

The decision could be as simple as taking the best tackle available.

The Browns are slated to pick No. 10 on April 23, which would be their seventh pick in the top 10 over the last nine years after falling well short of expectations with a 6-10 record in 2019. Clemson hybrid linebacker Isaiah Simmons is one of the draft’s most intriguing prospects, and a pass rusher could become a top priority if defensive end Olivier Vernon is cut in a cost-saving move, but NFL Network draft analyst Daniel Jeremiah believes the choice is clear for Berry.

“If you have a tackle that you really like, you’ve got a young quarterback in Baker Mayfield, this is a big year for him, and I think it’d be hard to go in any other direction,” Jeremiah said Friday on a conference call previewing the scouting combine this week.

Jeremiah was asked specifically about choosing between a tackle and Simmons, who has enough versatility and playmaking ability to play linebacker and safety.

“Now, if you have a much higher grade, which I love Isaiah Simmons, he’s a great player and I have him right now, on this list he’s my fourth player,” said Jeremiah, a former scout, including with the Browns. “Where as you look at somebody like a (Alabama tackle) Jedrick Wills is down there as my 11th player. So if you’re going strictly off the board, you’d say Isaiah Simmons. But the grades are close enough where I think I would value for this Browns team protecting my quarterback with the left tackle.

“You’ve got to be able to evaluate your quarterback. To fairly do that you’ve got to protect him, and I think that’s kind of the boat that a bunch of these teams are in with these young guys. If you look at the young quarterbacks that have been successful, a lot of them have had good offensive line play around them, and that’s been a huge benefit in their growth. So I’d like to see them give Baker Mayfield that benefit.”

Mayfield had a significant drop-off in 2019 after setting the NFL rookie record with 27 touchdown passes in 2018. Last year he finished 31st in the NFL with 21 interceptions, a 59.4 completion percentage and 78.8 passer rating. He’s responsible for much of the regression, but the protection from the line was an issue throughout the season, starting with inconsistent play from left tackle Greg Robinson and right tackle Chris Hubbard.

Robinson was told he wouldn’t be re-signed a couple of weeks before he was arrested last week with about 157 pounds of marijuana in his car in Texas. Hubbard is due a $6.15 million salary in 2020 and could be cut.

Berry and the new coaching staff are aware of the huge issue they inherited, and could use free agency and the draft to add two or three tackles.

“I think that is an area that is targeted for sure,” new coordinator Alex Van Pelt said.

The Browns haven’t drafted an offensive lineman in the top 10 since Joe Thomas at No. 3 in 2007. He went to 10 straight Pro Bowls at left tackle and played 10,363 consecutive snaps before his triceps ruptured in 2017.

The Browns have been looking for his replacement since. Fortunately for Berry, this draft offers options near the top.

Louisville’s Mekhi Becton is Jeremiah’s favorite. He’s 6-foot-7, 369 pounds and could be taken by the Giants at No. 4.

“He is an absolute freak,” Jeremiah said. “He is a left tackle. He’s a better version of Bryant McKinnie. He’s going to be that guy for the next 10, 12 years to protect your franchise quarterback.

“He’s so big and so long and so athletic, even when he’s not perfect it doesn’t matter ’cause nobody can get through him. You just don’t see guys like that come around very often.”

Wills, Georgia’s Andrew Thomas and Iowa’s Tristan Wirfs are also candidates for the Browns and could all go in the top 10. An early run on quarterbacks would give the Browns a better chance of landing their preferred tackle.

Jeremiah likes Wills (6-5, 320) as the best potential fit for coach Kevin Stefanski’s wide zone run scheme, which relies on athletic linemen to reach the outside.

“When you look at Jedrick Wills from Alabama, he can really move, and he’s really good working up to the second level, shows some of his athleticism there,” Jeremiah said. “He’s a natural knee bender. He’s good in pass protection. He doesn’t really get beat when you study Alabama.

“I think he’s the second-best tackle in the draft. I think he could plug right in.”

With needs on both sides of the line, Berry will have to marry his approaches to free agency and the draft. Colts left tackle Anthony Castonzo, Titans right tackle Jack Conklin and Packers right tackle Bryan Bulaga are attractive veterans in free agency and would pair nicely with a top rookie like Wills, who played on the right side at Alabama, which protected the blindside of left-handed quarterback Tua Tagovailoa.

“I think he can play on either side,” Jeremiah said. “I think he’d be a wonderful fit there in that scheme.”

Jeremiah projects Wirfs as a potential All-Pro guard but said he can play tackle in the NFL and could show plenty of athleticism for the position during the combine workout. Georgia’s Thomas — he has the name for it — is “dominant” in the run game and could be the pick at No. 10 if Becton and Wills are off the board.

“I don’t know that he’s a great fit for that scheme, but it’s an obvious upgrade for them,” Jeremiah said. “They could do a lot worse than taking him. He’ll be a steady, solid player. My issue with him is just some of the balance stuff and staying off the ground.”

The Browns are back to embracing analytics, which leaves trading down in play. The data shows the draft is a crapshoot, and a greater number of picks improves the chance for success. Berry might be able to trade down a few spots, add picks and get Houston tackle Josh Jones or USC’s Austin Jackson.

“As we go through the combine, I think he’s going to test really well, and I think you’re going to start hearing his name mentioned in that top-15 type mix,” he said. “And if you want somebody to fit that (Browns) offense, I don’t know that anybody fits it better than him. He’s only 20 years old. He’s got great knee bend. He can really move laterally. He’s going to get better.

“I have a feeling once we come out of the combine, Austin Jackson would be a name the Cleveland Browns are keeping an eye on.”

Eliot Wolf and Alonzo Highsmith left the Packers for the Browns together in January 2018. Now they’re headed to the Seahawks.

Wolf and Highsmith will consult for Seattle in the run-up to the draft, NFL Network reported. Wolf was assistant general manager for the Browns and Highsmith vice president of player personnel. They parted ways with the organization Jan. 29 after Berry was hired.