Louisville tackle Mekhi Becton is an athletic giant with an attitude: “I love being the biggest offensive lineman. I love intimidating guys” 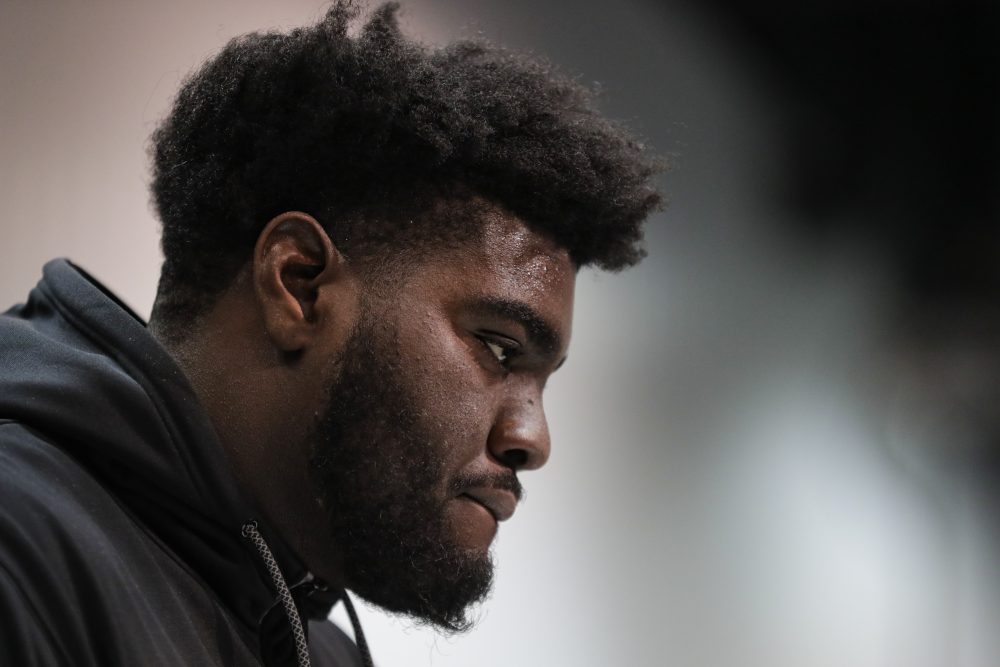 INDIANAPOLIS — The NFL Draft is headed to Las Vegas for the first time in April. The plan is for a boat to carry the players to the stage, which will be inside the Bellagio fountain.

“They need the extra-large one for me,” Louisville tackle Mekhi Becton said Wednesday regarding his preference of sea vessel.

The draft’s top linemen are all physical freaks. But as they paraded to the podiums to talk to the media, many shrunk in comparison to Becton.

Three linemen at the combine are slightly taller. He’s the heaviest by 33 pounds.

“I love being the biggest offensive lineman,” Becton said. “I love intimidating guys.” 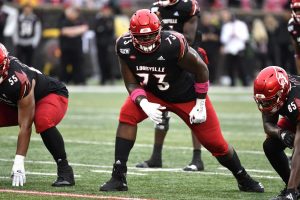 The Browns will spend the offseason looking for replacements for left tackle Greg Robinson and right tackle Chris Hubbard. Robinson will be a free agent and won’t be re-signed, while Hubbard could be cut to save money.

“We’ve talked a lot about being a QB-centered organization and certainly every year our priority is going to be to make sure to build a strong position group that can keep Baker (Mayfield) upright and give him the time ultimately to throw the ball,” general manager Andrew Berry said.

The Browns own the No. 10 pick, and Becton should be in the discussion if he’s still on the board.

The draft analysts vary widely on the rankings of the tackles, with NFL Network’s Daniel Jeremiah and ESPN’s Mel Kiper listing Becton No. 1 but Pro Football Focus putting him fifth behind Georgia’s Andrew Thomas, Alabama’s Jedrick Wills Jr., Houston’s Josh Jones and Iowa’s Tristan Wirfs. The Browns met with all of them this week.

Thomas would love to block for Nick Chubb again with Browns

Becton flipped sides based on the strength of the formation his first two years before anchoring at left tackle as a junior in 2019. He believes he can play either side in the NFL, but Jeremiah expects him to be a star at left tackle.

“I feel like I’m the most dominant tackle in this draft,” he said. “You wouldn’t go wrong picking me.

“The tape shows it. The tape shows that I finish almost every play. Simple as that. It’s just fun seeing a man on the ground every play and then going to jump on him. So that’s what I love about the game.”

He isn’t just a big, bad bruiser. The Cardinals ran an outside zone scheme, which is what new coach Kevin Stefanski is bringing to the Browns. The linemen must be able to get out in space and run to the sideline.

“We value movement skills,” Stefanski said. “That’s not to say that we don’t value a guy that is ultra-physical. I think it’s always a combination of all those things.”

Becton credits a basketball background for being light on his feet.

“I love outside zone and inside zone,” he said. “It’s just fun running a man out of the play and taking him where I want him to go.”

He won’t have anyone to block when the tackles do drills for NFL teams Friday but he plans to impress and is pumped the workouts are in prime time for the first time.

“I feel I can show the world what I can do,” he said. “They don’t expect a person like me to move that well. I’m going to shock a lot of people.”

Becton said it’s “real important” for him to be the first tackle drafted because he “didn’t put the work in for nothing.” If he gets his wish, he’ll almost certainly be gone before the Browns pick. Plenty of teams in the top 10 need tackles, including the Giants at No. 4.

But he’s not a lock to be the first tackle despite the impressive physical tools. He’s not a finished product, is still working to refine technique in pass protection, had sloppy game film in 2018 and said teams have questions about his passion for the sport.

They also are concerned about his weight management. He said he played around 352 pounds and his target is 350-355 yet showed up at the combine at 364, which he called “a great weight.”

“They definitely want me to lose, and I’m willing to lose weight, whatever they need me to do,” Becton said.

He’s got a good excuse for packing on a few extra pounds. His mom’s a caterer who can make anything well but delights her eldest son with soul food.

“Mac and cheese, fried chicken, collard greens. That’s a good plate for you right there,” Becton said. “You’ve got your starch and your greens and your protein.”

He better stay off Mom’s cooking before the draft, or else the NFL will need a bigger boat. And a larger life jacket.

“I don’t know how to swim, because I’m used to standing up in the water, so I never really had to swim,” he said. “So I hope that water’s not deep that I have to swim.”

Kevin Stefanski says he has “big plans” for TE David Njoku, but first he must live up to potential in “big year” for his future in Cleveland
OSU’s Chase Young went all-in before junior season, emerged as self-proclaimed best player in the draft