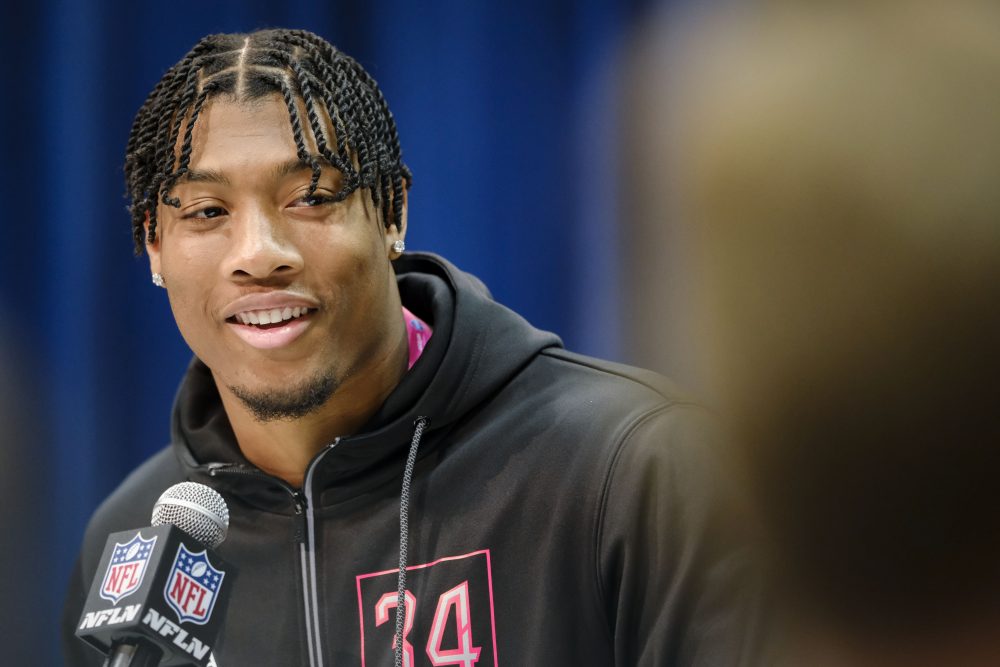 INDIANAPOLIS — Players at the scouting combine are labeled with a position and number so teams can easily identify them.

Clemson’s Isaiah Simmons stepped to the interview podium Thursday with “34 LB” on his hoodie. LB is for linebacker, 34 shows where he stands alphabetically among the position group.

Simmons is proud of his versatility, and should be. He has the body of a linebacker (6-3 5/8, 238 pounds) and the feet of a defensive back. Not only can he line up at linebacker or safety, he can rush the passer, stop the run and cover tight ends and running backs down the field.

The rare skill set and his production at Clemson (104 tackles, eight sacks, three interceptions and two forced fumbles as a senior) make him a top-10 talent for the draft in April. The Browns need help at safety and could use an upgrade at linebacker, especially if Joe Schobert leaves in free agency and/or Christian Kirksey is cut to save money.

The good news: Simmons could fill either role. The bad news: The Browns don’t pick until No. 10.

An offensive tackle makes a ton of sense as Cleveland’s first pick, but Simmons could be the guy to make general manager Andrew Berry reconsider if a run on quarterbacks or tackles keeps Simmons on the board. And Berry said Tuesday he’s open to trading up for the right player.

“I would just say globally those players that are versatile give us as coaches an opportunity to do so many things that are difficult for the defense to defend, or difficult for the offense to defend,” coach Kevin Stefanski said. “I think the classic one-position players are really good, you need a lot of them, but every roster, you’d hope that you have some guys that you can move along the front, move along the back end just in terms of making it hard for life on the opposing team.”

That sounds like Simmons. When asked which NFL player is a good comparison for him, he couldn’t pick just one.

“If I have to go look at film of somebody to get something, it would be (Broncos edge rusher) Von Miller just for pass rush, (Rams cornerback) Jalen Ramsey for man techniques and (Chiefs safety) Tyrann Mathieu just because he plays around everywhere, as well,” he said. “I take bits and pieces from all of them and kind of throw them into my game.”

He estimated he played as many as five positions during some games at Clemson.

“Mentally I feel like there isn’t anything I can’t do,” he said. “I played every position except for a nose (tackle) or 3-technique (tackle). When it comes down to it, I’m going to try with my best ability to do everything I can.”

Simmons said he’d do all the drills during the combine and go through them with the linebackers. Whereas his lack of a defined position could’ve been viewed as a negative to NFL coaches and talent evaluators a decade ago, today’s game values versatility.

“I would do everything I did in college,” he said. “Just kind of like a Swiss Army knife, move me around because then I’m able to show what I can really do.

“The game is evolving. The name of the game now is stopping tight ends, so something has to be done to stop these Travis Kelces and George Kittles out there. … like the game’s no longer a 250-pound linebacker. It’s more guys that are able to run side to side and are able to cover. It’s just a necessity now with the tight ends and running backs.”

Simmons said the hardest part about bouncing among positions is knowing what the other 10 guys on defense are supposed to do on that play. It helped that Clemson’s back seven met as a group, rather than the linebackers and defensive backs being split.

“That was the most complicated thing I had to deal with. But I learn everything very fast and I feel like that’s what really benefited me and helped me play at a high level,” he said.

He certainly doesn’t lack for confidence and was quick to flash his big smile during the interview. But he said his parents instilled humility by putting school and chores before sports, so he proudly wears his friend’s “Humble Over Hype” clothing brand.

“That’s something I truly believe,” Simmons said. “‘Humble Over Hype’ is a serious thing that people should really live by. There’s no better way to put it than that.”

OSU’s Chase Young went all-in before junior season, emerged as self-proclaimed best player in the draft
Austin Hooper lists plenty of reasons for signing with Browns, including Baker Mayfield, who impressed him in 2018 matchup