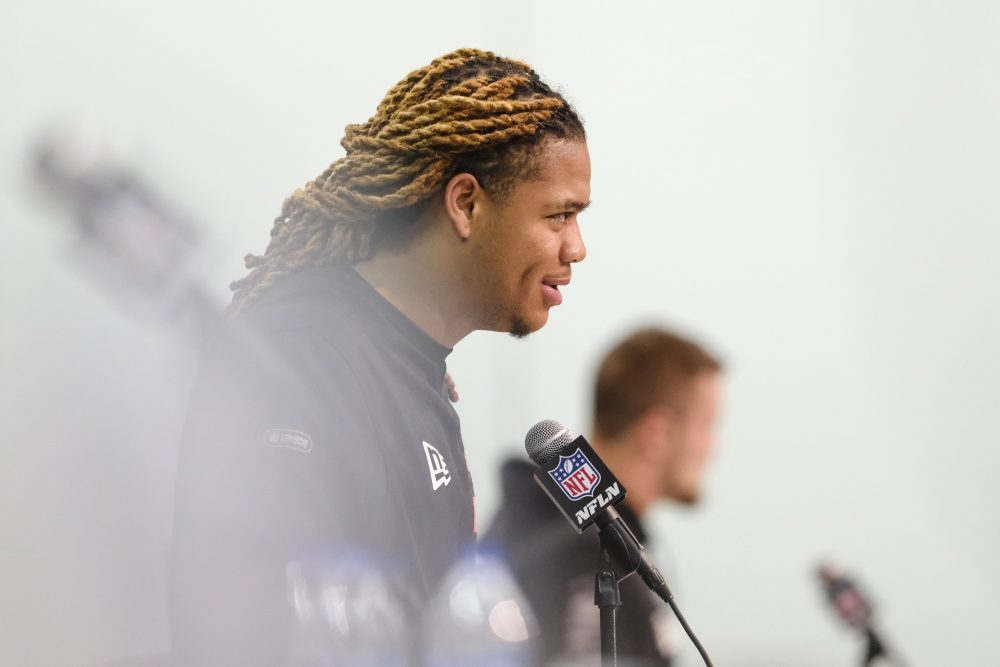 INDIANAPOLIS — The scouting combine isn’t real football. (The shorts and tank tops are a dead giveaway.)

That’s the reason Ohio State defensive end Chase Young gave for planning to sit out the 40-yard dash and skip drills at the scouting combine this week. He said he’s preparing to play games in the NFL rather than wow during a winter workout.

Young, who plans to do position drills at Ohio State’s pro day but not run the 40, can rest his case on the game film. He led the country with 16.5 sacks as a junior in 2019 despite a two-game suspension for an NCAA rules violation.

He’s widely considered the best player in the draft and is expected to go No. 2 to Washington unless it trades the pick to a quarterback-needy team. It would be a stunner if the Bengals don’t take LSU quarterback Joe Burrow with the first pick.

“I definitely think I put my best foot forward this year. I grinded hard. Two of my biggest things are my hard work and dedication and I’m gonna bring those two to the NFL with me.”

In addition to the sacks, he had seven forced fumbles despite offenses designing their game plans to minimize his impact. He won the major national defensive awards, was voted Big Ten Defensive Player of the Year and finished fourth in Heisman Trophy voting.

The extra work paid off.

“As we say at Ohio State with Coach (Ryan) Day, you’re really drinking the Kool-Aid,” Young said. “My sophomore year, I was sipping it, but I think my junior year I was drinking gallons all the time.

“So I think it goes out to Coach J (line coach Larry Johnson). Extra work with him. Film study. And my play recognition was through the roof junior year and that’s one of the main things that helped me through this season.”

Did he add any moves to his pass-rush repertoire?

“I wouldn’t say add, I would say try to perfect,” he said.

Elite pass rushers are nothing new to the Buckeyes. Joey Bosa was the No. 3 pick in 2016 and Nick Bosa No. 2 last year. Many analysts see a bigger upside for Young.

“Nick, he’s always setting the standard,” he said. “That’s just motivation for me to achieve a lot of real good things. It’s definitely been a blessing to watch him grow into the player that he is. He’s definitely helped me along this passage. He hasn’t stopped. I’m just grateful to be able to see him grow.

“I’m definitely excited to play with the big dogs and excited to show the world what I can do.”

He grew up in Washington and will likely put on the show at home.

“It’d mean a lot. Playing in front of my hometown people, it’d definitely be a blessing,” Young said. “Everybody who has known me since I was younger could come to a game and things like that, but right now I’m not focused on who could draft me. I’m focused on being the best player, the best person, I could be.”

Greatness recognizes greatness, and LeBron James is a big fan.

“It means a lot. I never thought the best player in the world would be a fan of me,” Young said. “It’s a blessing. Everything here is a blessing. I’m just forever grateful for it.”

Louisville tackle Mekhi Becton is an athletic giant with an attitude: “I love being the biggest offensive lineman. I love intimidating guys”
Clemson’s Isaiah Simmons is so versatile he needs three All-Pros to find the right comparisons for his defensive skills