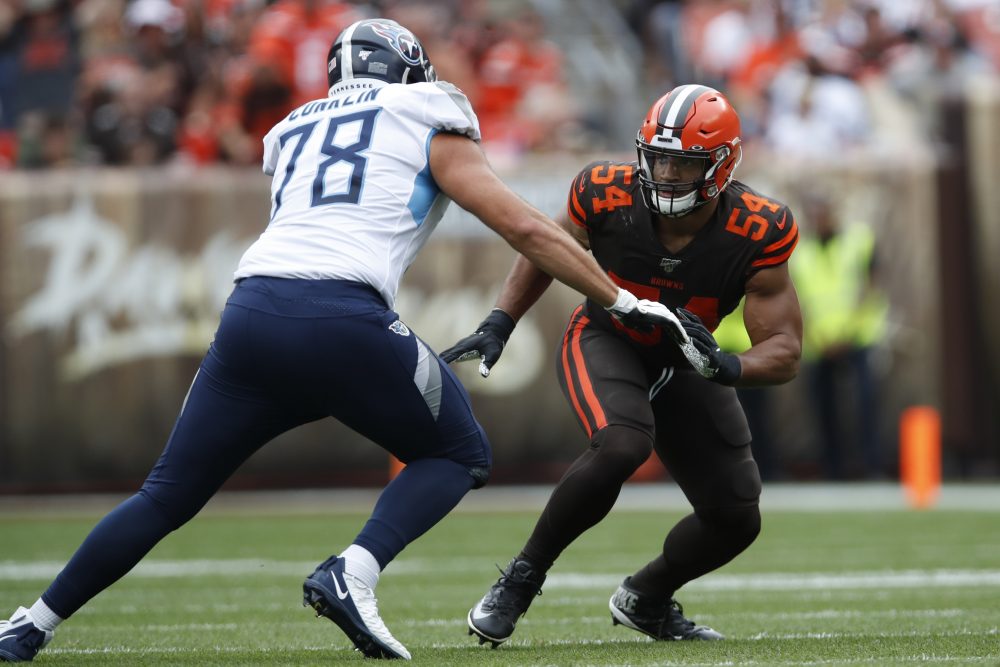 Andrew Berry didn’t act like a rookie or the youngest general manager in NFL history Monday.

The 32-year-old Harvard graduate began his first free agency in charge with three moves that impressed people around the NFL and excited a Browns fan base distraught over the 6-10 failure of 2019.

The NFL’s free agent negotiating period started at noon, and Berry didn’t need long to begin executing his plan. Less than an hour in, he had agreed to a deal with Atlanta’s Austin Hooper that will make him the highest-paid tight end in league history at $42 million over four seasons.

The deals can’t become official until the league year opens Wednesday at 4 p.m.

Berry was hired Jan. 28 and quickly realized the need for improvement at tackle and tight end. Safety is also a priority and could be the focus Tuesday if Berry shifts his attention to defense. The Vikings used the franchise tag on safety Anthony Harris at the last moment to keep him from becoming a free agent.

He must have listened when owner Jimmy Haslam said he felt the team was close to contending and not headed for another rebuild.

Conklin, 25, spent the last four years with the Titans after being the No. 8 pick of the 2016 draft from Michigan State.

The Browns entered the offseason looking for two new starting tackles, and Conklin (6-foot-6, 308 pounds) slides in on the right side. They have the No. 10 pick in the NFL Draft in April and are projected by many to take a left tackle.

Conklin’s contract has $30 million fully guaranteed, including $20 million in the first year. Conklin wanted to keep the length of the deal short due to the projected increases in the salary cap, Rosenhaus said. He’ll be 28 when the contract expires.

The average of $14 million a year looks like a bargain after speculation Conklin could command between $16 million-$18 million.

Conklin will replace Chris Hubbard, the starter for the last two seasons. Hubbard is due $6.15 million in 2020 and could be cut.

Conklin was a first-team All-Pro as a rookie. After two years of struggle and injury, which prompted the Titans to decline the fifth-year option on his rookie contract, he rebounded for a strong 2019 season.

Conklin is often referred to as a better run blocker than pass blocker, but his 92.5 percent pass block win rate ranked third in the NFL for right tackles, according to ESPN Stats & Info.

“Thank you @titans, my teammates and all the fans for a great 4 years!” he tweeted. “Couldn’t have asked for a better city to start my career in, I love you guys!”

He made the Pro Bowl the last two seasons and set career highs with 75 catches for 787 yards and six touchdowns in 2019.

Hooper is expected to pair with David Njoku in what could become a formidable tight end tandem in an offense loaded with playmakers. New coach Kevin Stefanski used a lot of two-tight end sets during his time as coordinator with the Vikings, and the Browns believe the extremely athletic but inconsistent Njoku is a valuable piece of the offense.

The Browns also have receivers Odell Beckham Jr. and Jarvis Landry and running backs Nick Chubb and Kareem Hunt. All have been to the Pro Bowl.

The agreement with Keenum, 32, upgrades the quarterback situation.

Keenum (6-1, 215) had the best year of his career in 2017 with the Vikings when Stefanski was his quarterbacks coach. Keenum went 11-3 as the starter, leading Minnesota to the playoffs. He completed 67.6 percent for 3,547 yards with 22 touchdowns, seven interceptions and a 98.3 passer rating.

Keenum spent 2019 with Washington, going 1-7 as the starter and getting benched. His numbers were solid, as he completed 64.8 percent for 1,707 yards with 11 touchdowns, five interceptions and a 91.3 rating.

Drew Stanton opened last season as the backup to Mayfield but went on injured reserve before Week 2 with a knee injury. Garrett Gilbert was the backup the rest of the season, but Mayfield made every start.

Mayfield regressed after a strong rookie year, ranking 31st in the NFL with 21 interceptions, a 59.4 completion percentage and 78.8 passer rating.

Browns agree to deal with TE Austin Hooper, who tells 92.3 The Fan he’s excited to join all the weapons around QB Baker Mayfield
Browns agree to trade for Broncos fullback Andy Janovich