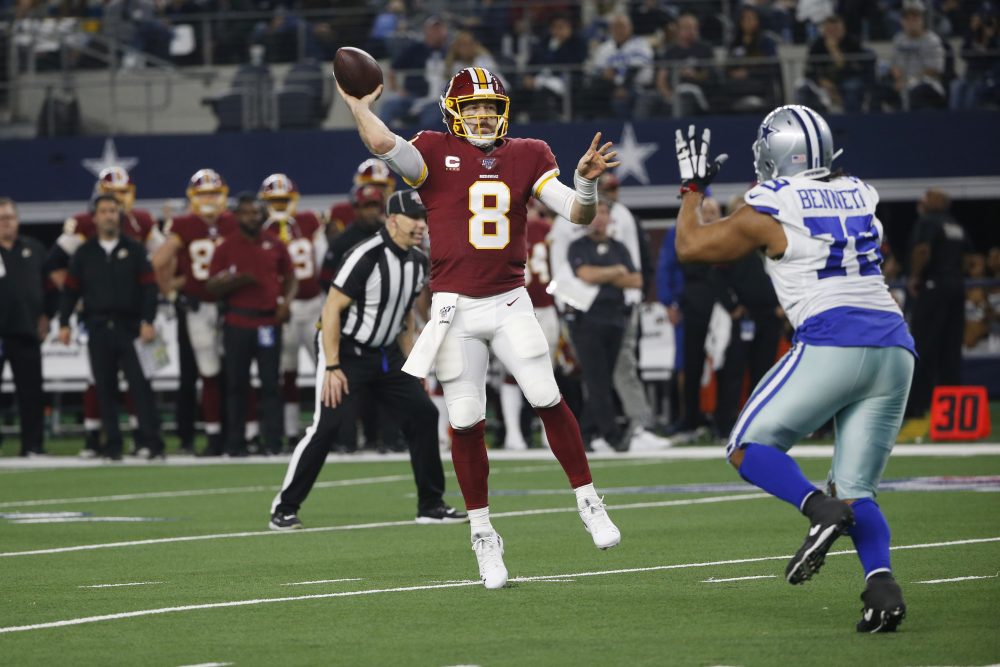 The beauty in researching the recent history of Browns backup quarterbacks is that, in most cases, the starting quarterbacks all look like backups, and so do the backups. In other words, they’re all the same guy.

You be the judge:

One of my favorite years was 2013, when starter Campbell and backup Weeden had a combined record of 1-12, and backup-backup Hoyer was a perfect 3-0.

Another good one was 2016, when the Browns won all but 15 of their 16 games, and receiver Terrelle Pryor did some flinging and zinging of his own, attempting nine passes, and finishing with a higher completion percentage (55.6) than actual quarterbacks McCown and Hogan.

It’s never a good sign for any team when the starting quarterbacks and backup quarterbacks are indistinguishable. On the other hand, one man’s Ken Dorsey is another man’s DeShone Kizer.

Which is why Hue Jackson once jumped in the lake.

All of which brings us to Case Keenum, who, in the category of nice work, if you can get it, has signed a three-year, $18 million contract ($10 million guaranteed) — to not be the Browns’ quarterback.

That’s if everything goes as planned.

You may or may not be keen on Case, but the fact that the Browns are willing to pay him $10 million to fill the role of “hang around here, just in, um, case,” tells you how seriously they are taking the backup quarterback position this year.

That may be because last year, Freddie Kitchens’ career backed up onto Mayfield’s career, and sat there all year, hampering, regressing, and nearly maiming Mayfield in the process.

In hindsight, a cottage industry when it comes to the Browns, it seems fair to assume that last season, all that went haywire with the Oklahoma Kid — and from here it looked like it was wire-to-wire haywire — was either directly or indirectly tied to the in-over-his-head-ness of the coach.

It seems probable that Mayfield, more than anyone, was the first to realize how overmatched Kitchens was as a head coach. The bizarre play calling was an early sign, and one that never went away. There were numerous other reasons. Enough, certainly, to leave little doubt that Kitchens’ implosion had to affect Mayfield’s play.

Given that, then it is reasonable to assume that Mayfield in 2020, post-Kitchens, should more closely resemble the Mayfield in his rookie season of 2018. That would obviously be the optimum outcome for the Browns, because that would mean that Mayfield very likely is the franchise quarterback he appeared to be two years ago.

But there are no guarantees.

If Mayfield continues to regress this year under new and, one presumes, better coaching, that would be a red flag the Browns would be unwise to ignore and foolish not to address. Another flat-line season from Mayfield — he certainly was not totally blameless for his alarming backslide last year — can’t be allowed to torpedo another season.

Contingency planning is an important, if underappreciated facet of running any professional sports team. You hope for the best, but you prepare for the worst.

Mayfield in 2020 looking like Mayfield in 2019 would be a severe gut punch to the franchise. But it’s also not a slam dunk that he’ll immediately revert to being the quarterback we saw in his sensational rookie season. Keep in mind that at this point the Browns have as much evidence suggesting that Mayfield is not THE GUY as they do to suggest that he is.

Which is an argument for paying a qualified quarterback $10 million to be Mayfield’s understudy. Keenum is that. He’s road-tested, having led the Vikings into the playoffs in 2017, when he went 11-3 as a starter, completed 67.6 percent of his passes, threw for over 3,500 yards and 22 touchdowns, with a passer rating of 98.3.

If Mayfield isn’t The Guy, neither is Keenum. He’s 32. He might be able to salvage a season or two, but if Mayfield goes south again this year, Keenum can only stick his thumb in the dike for so long.

Backups are backups for a reason.