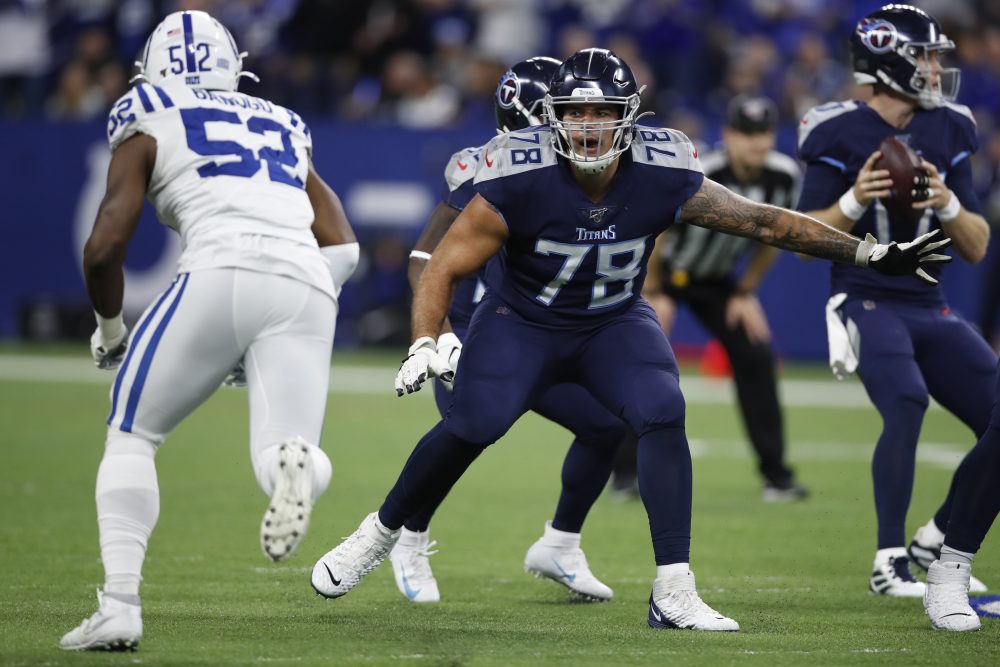 Right tackle Jack Conklin played a key role as Tennessee’s Derrick Henry went for 211 yards in the regular-season finale in December to blow past Cleveland’s Nick Chubb for the NFL rushing title, 1,540 to 1,494.

Conklin has changed allegiances and wants to make things right with Chubb.

“It’s an exciting time to have Derrick back there and to have such a special back last year and to be able to switch teams and have a guy who is just as good and be able to have an opportunity to go win that record again next year. That is my goal,” Conklin said Tuesday on a conference call. “I want to help us get there and help Chubb reach that goal and win that next year. That is just one of the fun things I look forward to. It is ironic, but it is a very positive ironic.”

Conklin, 25, was the top right tackle on the free agent market and signed a three-year, $42 million deal with the Browns last week. The Michigan native and Michigan State alum is excited to return to the Midwest and stay in the wide zone blocking scheme to be installed by new coach Kevin Stefanski.

Conklin’s also eager to bring playoff experience — the Titans reached the AFC championship game in January — and a winning culture to an organization that hasn’t been to the postseason since 2002.

“Definitely. Still being pretty young, I will still have to figure out my way with the team, but I want to be a leader,” he said. “I want to be a guy that guys can look to, especially having a taste of that playoff experience.

“You are going to lose. The thing that (separates) teams every year from the good and the bad are the teams that progress every week. Every week. The teams that really start hitting their strides and start looking good, it is in December and November. It is just building and building and taking as much as you can from the losses and not dwelling on them but learning from them and transferring that over to the wins. Then it is building confidence and momentum throughout the year.”

He doesn’t doubt the talent that’s been assembled in Cleveland is capable of reaching the postseason.

“I believe this team has a roster that is up there with the best,” he said. “It was an easy choice.”

For the Browns, too.

“He’s a really smart, tough football player,” Stefanski said when Conklin’s signing was announced. “From what I have heard about him and talked to former coaches and teammates, he’s all about ball. I think Jack represents everything we want to be as a team.”

Conklin was drafted No. 8 by the Titans in 2016. The Browns held the pick after trading No. 2 to the Eagles, who took quarterback Carson Wentz, then dealt it to Tennessee for more picks, including No. 15. They used it on receiver Corey Coleman, who was a bust.

“Definitely weird. It is kind of funny how it has come down to back to the Browns,” Conklin said.

After being named first-team All-Pro as a rookie, Conklin started every game in 2017 before tearing his anterior cruciate ligament in the playoffs. He missed the start of 2018 then finished the year on injured reserve with another knee injury. He returned last season, stayed healthy and played at a high level.

“Definitely just growing as a player. Definitely kept the hard-nosed, power type of guy and player,” he said. “I think what has grown is really understanding, especially in this zone scheme offense, the athleticism that it takes, the running, to open the hips, the ability to get my head across and stuff like that. I think I matured in the way of learning the scheme and how to use my body in those different schemes.

Conklin joins left guard Joel Bitonio and center JC Tretter along a line that still needs work. The Browns don’t have a starter at left tackle and are projected by many to draft one with the No. 10 pick in the draft April 23.

Conklin would be glad to serve as a mentor.

“It would be an awesome opportunity,” he said. “As a guy who is new to the team, to be able to take in another guy who is younger and help with his progress, I think that is what really comes down to being an offensive lineman. In that case, yes, I would try to step up, be a leader, help be a mentor to him and do everything I can to help him get along and get through all the pieces of the NFL, whether it is playing or just the mental state of everything.”

Austin Hooper lists plenty of reasons for signing with Browns, including Baker Mayfield, who impressed him in 2018 matchup
Case Keenum promises to be ready if needed but says he’s comfortable as backup and adviser to Baker Mayfield, excited to put down roots with Browns