Jim Ingraham: For Browns, the classic uniforms are the only ones that really fit 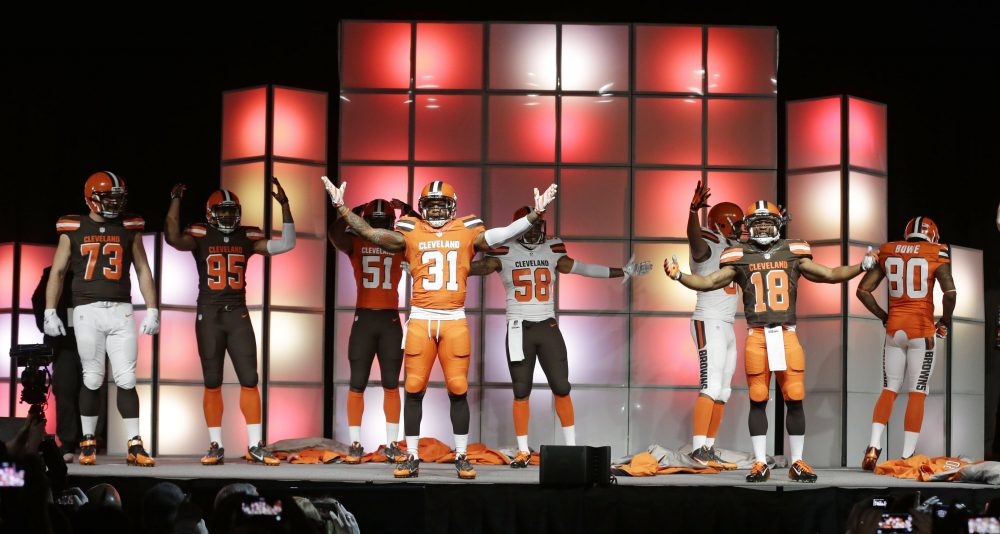 The Browns are going to unveil their new uniforms next week. What could possibly go wrong, right?

The last time the Browns unveiled new uniforms — all nine combinations of them — the overwhelming public reaction ranged from “What?” to “Is it hot in here or is it me?” to “When will you be unveiling the next new uniforms after these ones?”

Those ones, all nine combinations of them, were not so much uniforms as they were costumes. Boiler suits. Random outerwear. Without belaboring the point, they were ill-conceived, poorly designed and there were way too many of them.


How many of them were there?

Let’s put it this way: in a three-year period starting in 2015 the Browns had over twice as many uniform combinations (nine) as victories (four). I’m no fashionista, but I don’t think that’s a very good ratio.

The theory seemed to be that if the Browns couldn’t overwhelm fans with victories, how about uniforms? It was the ultimate diversionary tactic that flew in the face of logic; airspace, by the way, that the Browns have flown in exclusively for years.

Generally speaking, when it comes to professional sports, the optimal number of uniforms is two. One for home and one for the road. But that was before professional sports was overrun by marketing departments, which operate under the motto “The only bad uniforms are unsold uniforms.”

It used to be, in all sports, that you could instantly tell which team you were watching as soon as you saw the team’s uniforms. Good luck with that today. It’s bad in the NFL. It’s bad in Major League Baseball and it’s completely out of control in the NBA, whose teams never, it seems, wear the same uniforms in consecutive games.

I doubt, however, that any NBA team’s closet would have room for nine uniform combinations, an unsavory trend that the unsavvy Browns apparently tried to start, but, come next week — we can only hope — will finally, mercifully and officially abandon.

Hopefully, at next week’s uniform reveal, cooler heads will prevail and the Browns will go back to their glorious past, when they were always one of the best teams in the league, while wearing the handsomest uniforms in the league.

Brown and orange is a terrific color combination, but today’s Browns can’t even get the SHADE of orange right. It’s always not quite the shade the team used on the helmet that Jim Brown planted into opposing sternums on his way to the end zone.

Going back to those classic Browns uniforms would be a very positive early sign that today’s Browns’ ownership and management is toning down its tone deafness to this franchise’s roots. There is nothing wrong with wearing the same classy uniforms every week.

But it’s a two-step process.

No. 1, you have to create the classy uniforms and, No.2, you have to commit to wearing them. The same one (or two) every week. Sure, it might negatively impact the bottom line in the team shops, souvenir stands and online sales of Browns jerseys. But so what? It’s time to worry more about the steak than the sizzle. Besides, what’s wrong with a stadium filled with fans all wearing the same classic Browns jerseys?

It’s time to move past all the cheesy derivatives, the tacky, troubling attempts to reinvent the wheel with all those countless variations on football clown suits.

Sounds crazy, but maybe in football you really are what you wear. Do the math. For the last several years the Browns have dressed like a 1-15 or 0-16 team WOULD dress.

Fashion-wise, the Browns have tried the ridiculous and it didn’t work. Spectacularly so. Now it’s time to give sublime a try. It would be a way for the Browns to acknowledge their past, a past when THEY were the gold standard for other teams. Not just in performance, but their uniforms. The Browns’ classic uniforms were then, and can be again, the best uniforms in the league.

Jerry Seinfeld once said that with all the player movement in sports, fans cheer not for the players, but for the laundry. The uniforms.

Under their current ownership, the Browns have had bad teams, and even worse laundry.

Mock draft: Unsurprisingly, Browns shore up offensive line with 10th pick
Commentary: When it comes to drafting Buckeyes it’s been O-H-I … don’t think so for the Browns