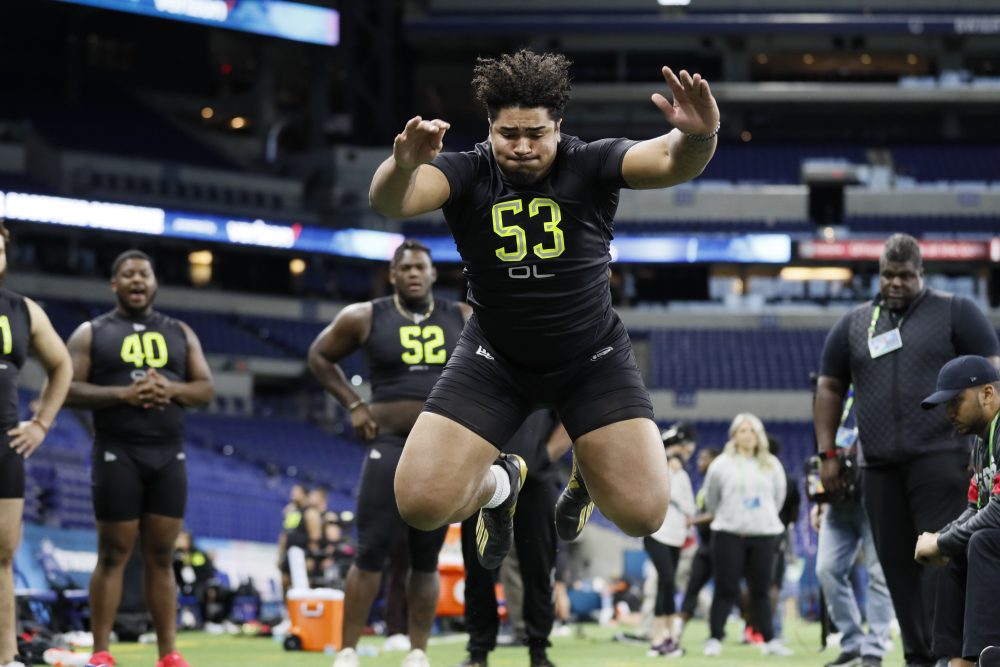 The offensive linemen put on a show at the scouting combine in February.

Then Tristan Wirfs stole it.

The 6-foot-5, 320-pound University of Iowa tackle led all offensive linemen by running the 40-yard dash in 4.85 seconds. That followed a 36.5-inch vertical leap that set the modern (since 2003) combine record for linemen and a 10-1 broad jump that tied the mark.

“This kid has a unique way about rising to the challenge,” Hawkeyes line coach Tim Polasek said in a phone interview. “His performance at the combine didn’t surprise me at all. I would’ve been shocked if he wouldn’t have broken the records he broke.

“The most impressive thing was probably the broad jump. That’s a real, true measure of explosion.”

Wirfs is in the mix for the Browns, who are expected to draft a left tackle with the No. 10 pick April 23. He joins Louisville’s Mekhi Becton, Alabama’s Jedrick Wills and Georgia’s Andrew Thomas in many analysts’ top tier of tackles, with at least two expected to go in the top 10.

Linemen need to be able to fire off the ball to generate power and speed. Polasek said the broad jump reveals a lot more about Wirfs.

“The way he can catch on that jump and control his weight, that’s just a good indication of his body control and his ability to bend and be flexible,” he said.

Wirfs stayed on campus to train and knew big things were coming.

“I’m just excited to get out there and do all this stuff and do all the tests,” he told reporters two days before the combine workout. “It’s going to be a fun couple of days.”

Some linemen are lankier than others. Wirfs doesn’t fit in that category. He’s got a powerful base with huge thighs and hamstrings yet moves smoothly.

The combine wasn’t the first time he sent jaws to the floor in a workout. He hang cleaned an Iowa-record 450 pounds four times, pulling the loaded barbell from his thighs to shoulders while going from palms facing his body to palms out.

So when he was asked his best attribute, his answer shouldn’t have surprised.

“I think I’m pretty powerful,” he said at the combine. “I think I move guys off the line of scrimmage.”

Iowa O-Lineman Tristan Wirfs is a MONSTER.@TristanWirfs74 (via @HawkeyeFootball) pic.twitter.com/XnOP0NeVEJ

“Second is the first loser, so I want to be the first tackle taken,” Wirfs said.

Lack of pro day hurts, but Lorain’s Rashod Berry still confident in chances to be drafted

If he is still on the board, the biggest question for the Browns would be whether he can fill their void at left tackle after signing free agent Jack Conklin to a three-year, $42 million deal to play right tackle.

Wirfs moved into the starting lineup at right tackle as a true freshman in 2017 when injuries hit the Hawkeyes. With Alaric Jackson at left tackle, Wirfs stayed on the right side.

“The combination had been rocking along,” Polasek said. “Do you want the (quarterback) to get hit in the face or do you want him to get hit from behind? It’s one of those deals where I don’t know that we deem it as, OK, he has to be our left tackle because he was the better of our two players. That combination worked for us.”

Wirfs did start three games at left tackle in 2019 when Jackson was hurt, giving NFL teams film to analyze. Polasek has seen enough.

“There’s no limitations athletically,” he said. “He’s a special pass protector. He’s really, really special when it comes to winning one-on-one pass protection matchups. He has a great feel and instinct for it.

“He does a really good job of understanding leverage and angles and then obviously he’s a physical freak. And he uses his tools well in the pass pro game.”

Wirfs said he doesn’t have a preference between tackle spots. He was voted second-team All-American and first-team All-Big Ten and named the Rimington-Pace Big Ten Offensive Lineman of the Year.

He grew up in the small town of Mount Vernon, Iowa, and dominated the sports scene. He won the discus state title three straight years, the shot put title twice, was a state champion wrestler as a senior and a home run hitter on the baseball diamond.

“I think there are two big things you can take away from wrestling that translate over to football: body control and an awareness and hand movement,” Wirfs said. “Being able to do that I think shows teams how competitive I am. It takes a lot to be a wrestler, especially people from Iowa will attest to that.

“I hate losing, so I’m not going to let another man beat me. I’m going to do everything I can to stop it. You’ve got to do the same thing on the offensive line.”

During practice, defensive end A.J. Epenesa was the challenge. He was a first-team All-Big Ten selection and is expected to follow Wirfs in the first round.

“Tristan is a beast. You can’t ask for anything more than all that natural talent he has and how quickly he’s able to learn and how freakishly strong he is,” Epenesa said at the combine. “I don’t think anyone is really as good as Tristan.”