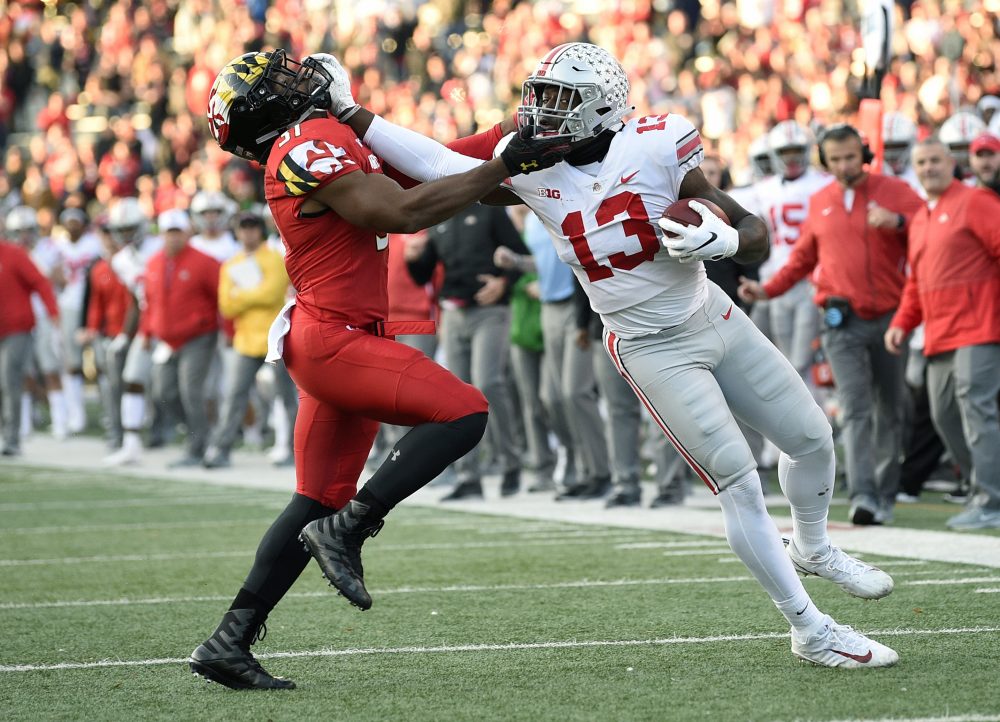 The athleticism is undeniable. The spirit is indomitable.

Those who know Rashod Berry well believe the special combination will be the separator as he tries to secure a spot in the NFL.

“It seems to me everyone, including Urban Meyer, has been so intrigued by him,” said Dave McFarland, Berry’s football coach at Lorain High School. “He’s a high-character guy with phenomenal athletic ability. I really believe he’ll find a spot.”

“If he gets on an NFL team, those coaches will fall in love with him,” Lorain basketball coach John Rositano said.

Berry dominated on the football field at Lorain, crushing quarterbacks as a defensive end and shredding defenses as a big, physical, fast receiver. His athleticism was even more obvious on the basketball court, as his one-man fast breaks and 360-degree dunks convinced Ohio State’s Meyer and Michigan State’s Mark Dantonio to offer him football scholarships.

Berry (6-foot-3, 263 pounds) picked Ohio State with McFarland sitting in his kitchen and his grandmother emphasizing the need to study. Berry is glad he chose the Buckeyes, but his five years weren’t easy. He met the challenges with optimism, determination and selflessness.

“His natural smile and ability to make the best of a situation is what got him through that,” said McFarland, who’s been contacted by NFL teams researching Berry.

The coaching staff couldn’t decide on a position for Berry, shuttling him between tight end and defensive end. He settled in at tight end for the final three years, but a rotation at the position cost him playing time and the offensive philosophy robbed him of playmaking opportunities.

With his career coming to a close, Berry put the team ahead of himself again. He volunteered to moonlight at defensive end when bodies were needed and became the first Ohio State player in seven years to play offense and defense in the same game.

“Maybe he didn’t get as many catches, but he’s going to do down as one of the greats who played both ways,” McFarland said. “That’s because he’s coachable. It’s a great lesson for everyone.”

Berry wasn’t invited to the scouting combine and Ohio State’s pro day was canceled because of the coronavirus pandemic, but he remains confident he’ll be selected in the NFL Draft from April 23-25. The combination of speed, strength and explosion can’t be ignored by scouts.

“He’s a kid who will test out great. He’s just so athletic,” Ohio State executive director for football relations/special assistant to the head coach Tim Hinton said. “My biggest thing is he gets the opportunity to show it, based on what’s going on in the world.”

Berry’s agent is working on setting up a pro day to record and send to NFL teams. While that would help, Berry already has plenty of examples that prove he’s special.

“I remember standing with Ohio State and Michigan State coaches at a basketball game,” said McFarland, who said Berry was good enough to get a basketball scholarship. “He would rip a rebound off the rim so fast it looks like goaltending and in what seemed like three strides he was at the other end of the floor slamming it. That was a big selling point.”

Standing out athletically at Lorain is impressive. Doing it among the stable of athletes at Ohio State is on another level. Yet that’s what Berry did, whether he was playing defensive end, tight end or pickup basketball.

“I was definitely one of the most athletic guys on the team,” he said.

He knows succeeding in the NFL is about more than being an athlete.

“I definitely hope it plays a part, just having an athletic guy who can play a lot of different positions, help the team out in different ways,” Berry said. “But I’m not really relying too much on that.”

Some NFL teams have asked Berry about going back to defensive end, and he’s open to anything.

“I just want to get on a roster, do what I can do and then contribute any way possible,” he said. “Honestly, I feel like grabbing a guy that can do multiple things for your team, I think that’s a plus. The more you can do, the better.”

Elyrian Tracy Sprinkle, a mentor and former teammate, said NFL coaches will have a difficult time deciding where to play Berry.

“Ooh, that’s tough. In my opinion, he can play both,” Sprinkle said. “I think he was a better defensive end, just because of his get-off, explosiveness and he was good with his hands.”

The five years in Columbus didn’t go as Berry hoped. He didn’t find stardom and didn’t guarantee himself a spot in the NFL.

“I had my ups and downs obviously. Had my struggles,” he said. “The one thing I did a lot, I pray a lot.”

He also leaned on his support system, which included people back in Lorain and the Ohio State upperclassmen, including Sprinkle. The groups refused to let him get down on himself.

“All the adversity he’s gone through, he always had a smile on his face,” Sprinkle said. “I’m proud of him, proud of the man he’s become.”

In an age in which college kids are quick to transfer or cop an attitude, Berry stayed put and persevered.

“In 30 years of coaching, there ain’t none better. There’s nothing fake or phony about him. Great kid, great heart.”

“He’s a great kid. He’s really over the years grown,” Hinton said. “He understands the big picture, the team concept, the personal sacrifice to win.”

Milestone moments were rewards along the way. Berry caught a touchdown in the 2019 Rose Bowl and converted an overtime fourth down earlier in the year with an 11-yard catch in a 52-51 win over Maryland that kept alive the Big Ten title hopes.

The greatest achievement was the degree in consumer and family finance.

“I just feel like that was a huge accomplishment,” he said. “Just being a kid from Lorain, Ohio, try to be a good example for the city and the other kids and be a good role model. I just felt like I owed it to them.

“I just wanted to make a lot of people proud, even myself proud. Because a degree can’t be taken away from you once you’ve got it. I feel it was well-deserved and a lot of hard work was put into that.”

The next step won’t be any easier. Whether Berry is drafted in the late rounds, signed as a free agent or invited to a camp as a tryout, nothing about his NFL future is guaranteed.

Hinton called Berry a bit of an “enigma” after inconsistency for the Buckeyes and said NFL teams want to know if he can be an every-down player.

“He has an awful lot of talent. He’s very capable of being whatever he wants to be. Now it’s putting it to use at that level,” Hinton said. “I think he’s learned a lot of lessons. I’m excited to see the opportunity the NFL can provide for him.”

Hinton’s biggest concern is that Berry is what he calls a “rep learner,” meaning sometimes it takes two or three times in practice before he nails what he’s supposed to do on a play.

“The NFL is not about development,” Hinton said. “From the first rep you need to do a very good job. The ability to go from a classroom setting out to the field is very important for him.”

“A lot of motivation,” Berry said. “They keep me going, definitely.”