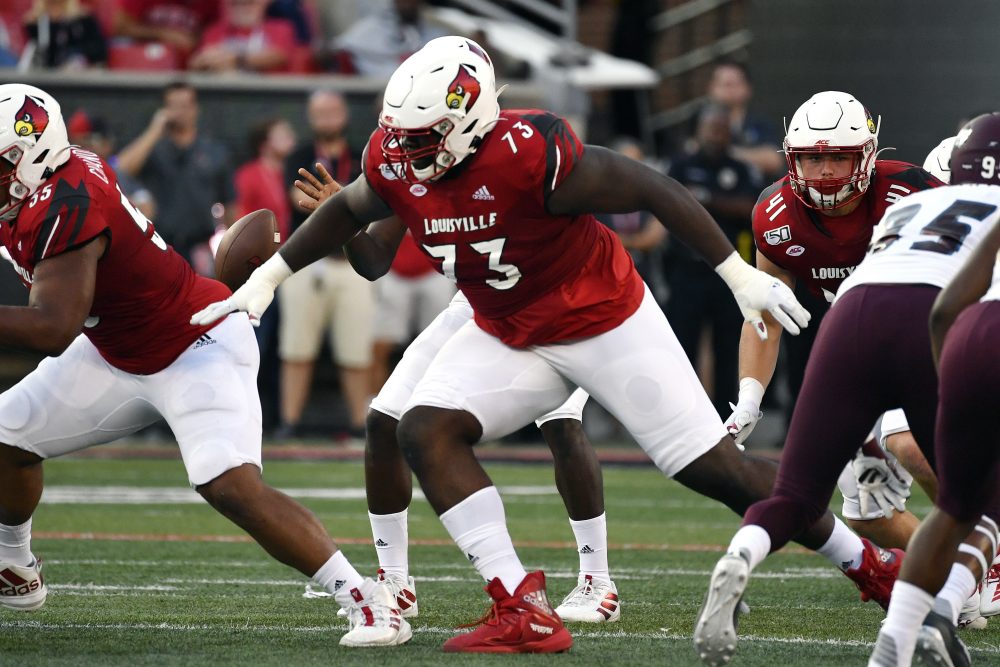 Dwayne Ledford bounced around the NFL for seven years as an offensive lineman, including a stop with the Browns in 2005. Although he may have slimmed down a bit since his 6-foot-4, 300-pound playing days, his upper body still bulges with muscles.

So when Ledford talks about the damage mammoth Louisville left tackle Mekhi Becton can do, he shouldn’t be dismissed. Especially after experiencing it firsthand while stepping in to rush the passer during a walkthrough.

“He punched me one time and I thought I was going to not be able to coach that Saturday,” Ledford, the Cardinals’ offensive coordinator/line coach, said in a recent phone interview. “I don’t know if anybody’s ever jarred me that hard before.

“He possesses a lot of strength. And all he’s going to do is continue to get stronger and keep developing and getting better and better.”

Becton is one of the premier tackles in the NFL Draft and in consideration for the Browns, who have the No. 10 pick April 23. Georgia’s Andrew Thomas, Alabama’s Jedrick Wills and Iowa’s Tristan Wirfs are the other tackles in the top tier.

Becton’s power is obvious in the game film, as he takes turns uprooting, burying and swallowing defenders in the run game. When he arrived before Becton’s final season, Ledford preached finishing on each play, and Becton took it to heart.

It’s not just strength and attitude that allow Becton to dominate. He has a body rare by even NFL standards, and athleticism to match.

“After I ran the 40, I felt that I ran fast,” Becton said on “The Red Zone with Nick Coffey” radio show. “I heard all the coaches take a gasp.”

“When you see the clips of it and just see him striding out, you really get to see how athletic a guy is,” Ledford said. “A lot of times with offensive linemen they always say there’s not a lot to put into 40s. But to me, if I can see a guy run and see how he sprints and how he can open up his gait, it shows how athletic he is.”

And he will enter the NFL as one of the largest men in its history. Ledford says he’s never coached anyone or played with anyone Becton’s size.

Who can do impressive things.

He’s been able to continue training for the draft in Dallas and took the workout outside, pushing a pickup truck down the street. He got it going so fast, he had to break into a jog to keep contact.

“He moved it with such ease. He could use an 18-wheeler,” Ledford said.

Draft analysts are all over the board with their rankings of the tackles. NFL Network’s Daniel Jeremiah has Becton No. 1.

“Mekhi Becton and Quenton Nelson are the 2 best finishers in the run game that I’ve evaluated since 2003,” he tweeted. Nelson is a two-time All-Pro in two seasons for the Colts.

Becton ran the wide zone scheme his final year at Louisville, which Ledford said prepared him for the similar system Browns coach Kevin Stefanski will use. Ledford had concerns about Becton being able to bend and block in space, but they were quickly erased.

“After our first day of spring football, I went over to our head coach and I was like, ‘We have no issues at all with that guy,’” he said. “The Syracuse game, I told my wife as soon as she came down on the field after the game, we have an absolute monster on the field with him. I’ve never said that about a kid before. There’s not a lot of dudes out there 6-7, 6-8, 360 that can do the things that he does.”

“It’s just fun seeing a man on the ground every play and then going to jump on him,” Becton said at the combine. “That’s what I love about the game.”

The question for some analysts is whether Becton is a pass protector worthy of a top-10 pick. Pro Football Focus ranks him 47th in the draft class and fifth among tackles (behind Thomas, Wirfs, Wills, Houston’s Josh Jones) based on a lack of true dropback pass sets. The site had him giving up eight pressures in those 73 opportunities, forcing a projection to how he’ll hold up on the blindside in the NFL.

Becton believes he’s the best tackle in the draft but knows there’s room for improvement.

“My footwork can get out of place sometimes. My hand placement, as well,” he said.

“He did a phenomenal job at it,” he said. “He’s got the length to keep defenders off of him. With guys that try to beat him with speed, he does a good job of being able to get to a spot and also be able to use his length to be able to keep those guys away from the quarterback.”

Whether Becton goes No. 4 to the Giants, No. 8 to the Cardinals, No. 10 to the Browns or slips further, Ledford said the lucky team will get a “great human being.”

“He’s something special,” he said. “As big as he is, he’s got a big smile that can light up a room. He’s fun to be around. I can’t say enough good things.

“He’s a good one. He’ll be somebody somebody’ll be very happy with, that’s for sure.”