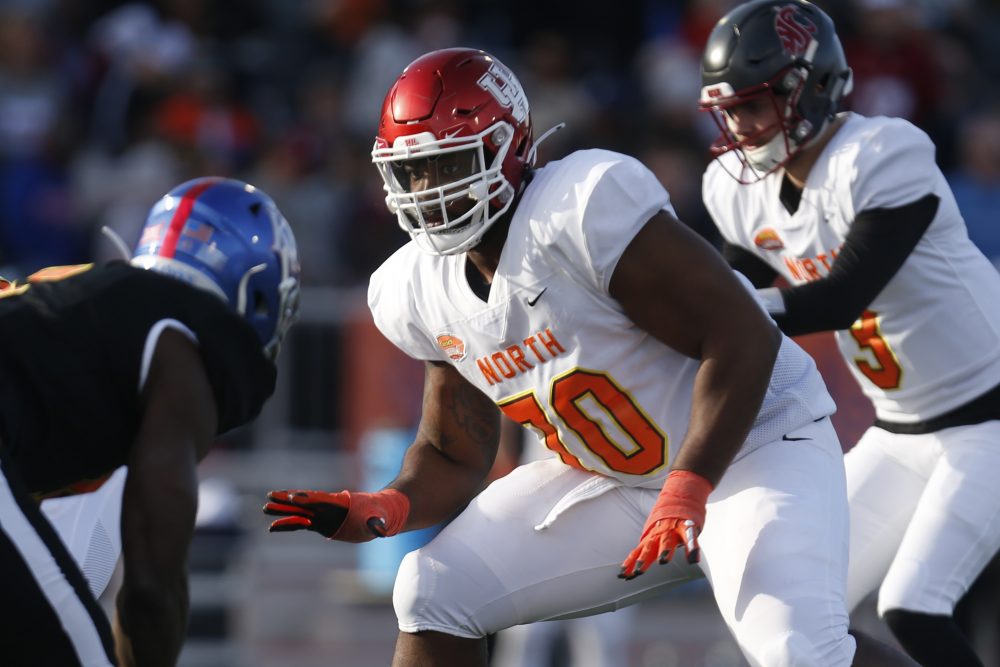 When Brandon Jones arrived at the University of Houston to coordinate the offense and coach the offensive linemen, Josh Jones had already started 36 games at left tackle.

The elder Jones wasn’t close to satisfied with what he was inheriting in the fifth-year senior.

“I thought he was an underachiever,” Brandon Jones said in a recent phone interview. “And we had some good conversations about that.”

Josh Jones wanted to play in the NFL, so Brandon Jones gave him some advice that a year later has propelled him into a likely first-round pick and a potential option for the Browns in their search for a left tackle, especially if they trade down from No. 10.

“I said what separates elite tackles and average tackles is just their ability to finish,” said Brandon, the co-coordinator and line coach for the Cougars. “And finishing in the run game, finishing your blocks, taking your guy completely out in pass protection. That’s what he really bought into and that’s really helped him.

“We talked about that quite a bit, finishing and just trying to bury people and embarrass them.”

Josh (6-foot-5, 319 pounds) acknowledged it was important for him to prove to NFL scouts he could dominate opponents and do so with a nasty streak.

“I just wanted to bury guys every single time I got out there,” he said at the scouting combine. “My O-line coach, Brandon Jones, pushed me to do that, to be violent out there. I actually feel like that’s one thing I wasn’t showing on tape, just finishing guys. So that’s what I wanted to do.”

Jones is widely considered among the second group of tackles in the draft, along with Boise State’s Ezra Cleveland and USC’s Austin Jackson. But Pro Football Focus has him in the Big Four behind Georgia’s Andrew Thomas, Iowa’s Tristan Wirfs and Alabama’s Jedrick Wills and ahead of Louisville’s Mekhi Becton. PFF even had the Browns selecting Jones at No. 10 after giving him a 93.2 grade as a senior, the highest in the draft class.

PFF can be a divisive topic among football people, but Brandon Jones said Houston uses its system and the grades are usually “pretty spot-on.” What’s universal is the importance of finishing blocks. It’s been a theme in interviews with the line coaches of the top prospects.

“I think it has to do more with confidence,” Brandon said. “You have the ability to finish and you need to do that because as an offensive lineman you want to obviously tear down defensive linemen, and him getting buried play after play, that usually does that.”

He saw the growth in Josh, who finished with 45 starts, all at left tackle, and allowed one sack in nine games as a senior before suffering a high ankle sprain that sidelined him. He’s the most experienced of the tackle prospects, with everyone else leaving school after their junior season.

“The game just really slowed down for him and he knows what to expect, he understands defenses, his film preparation’s better,” Brandon said. “So it’s just his overall preparation improved, his work ethic obviously improved.”

“Yeah, it’s burned in him,” Brandon said. “He knows that now. He showed flashes of it before, but I demanded it. He’s bought into it and he just does it on his own now.”

Brandon’s favorite run play is the wide zone, which Browns coach Kevin Stefanski will build his scheme around, so Josh wouldn’t have an issue adjusting. The concern is a lack of consistency with his kick in pass protection.

“He’s really athletic in pass protection, he very seldom gets beat,” Brandon said. “A lot of tackles can get out-athleted or get beat by speed rushes and things like that. He can obviously sit down and battle with just about anybody.

“But he needs to continue to refine that. His kick is a little different at times, he does a set that we try to get him to break his habit. I can’t stress this enough, his future’s pretty bright.”

Josh agrees his potential is special.

“I can get to my spot because I’m athletic. Once I become a true offensive lineman with my technique, base, hands, it’s going to push me to be very, very good,” he said.

The Senior Bowl was pivotal for his chances of being drafted in the first round. He went to Mobile, Ala., and proved he could handle a step up in competition.

“I was able to come in and kind of get that stigma off me,” he said. “I was able to get some good reps against some good pass rushers from Power 5 schools. So I can dominate, whatever the (level).”