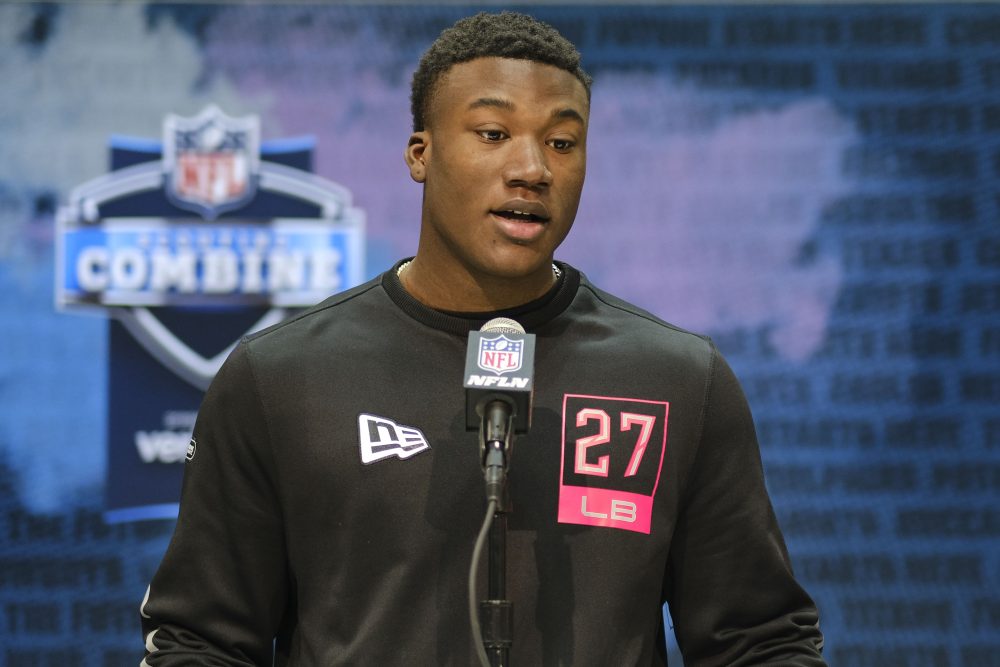 Kenneth Murray spoke as if he recovered a fumble, not saved a life.

“Just happened to be in the right place at the right time,” he said.

The humility is a glimpse into one of the most inspiring players in the NFL Draft. The Oklahoma middle linebacker is a star on the field and a hero off it. And his impressive intangibles go well beyond resuscitating a woman on the sidewalk on his way home from church — and then leaving before he could be given credit.

“The dude is different. The guy is rare,” Sooners inside linebackers coach Brian Odom said recently in a phone interview. “What makes him so rare, you can pick one aspect of him and it’s rare. His worth ethic is rare. His stature when he walks in the room, he looks rare. His character, he’s one of the best people I’ve ever been around in my whole, entire life. And then truly to have all three of that combination, you couldn’t draw it up any better.”

Murray and LSU’s Patrick Queen are vying to be the first inside linebacker taken Thursday night. The Browns have a need at linebacker, and Murray could be an attractive option if they trade down five or 10 spots from No. 10.

“It’s so tempting to take him earlier just because there are so many intangibles, like this doesn’t come around very often,” Odom said, calling him one of the safest pick in the draft. “You know the guy can run, you know he’s got great size, I dare you to find somebody that won’t vouch for his character.”

Murray’s dad is a pastor and his mom a retired police officer. He went through CPR training as a young teen working as a counselor for kids at the community center and put it to use years later.

Another car stopped in the middle of the road, a woman got out and ran to the sidewalk, where another woman was on the ground. Murray saw what was happening and headed over.

“When I arrived on the scene she was bleeding from the head, completely unconscious, just laying on the ground,” he said at the scouting combine. “The other lady was her friend, she was screaming and yelling at her, trying to get her to wake back up. So that’s when I just immediately started CPR. Got between 70, 80 pumps in and that’s when I finally got her revived, got her back to breathing. Then shortly after that the paramedics arrived.”

The woman would disagree, but perhaps the most impressive part is that he didn’t tell anyone. It only became public because a reporter for the student newspaper witnessed the heroism.

Odom said “zero” other college students would try to keep it a secret.

Murray’s character is about much more than a single act. But Odom interrupted that discussion to shift the focus to football.

“All-American guy and a great smile and a great presence and a great person, don’t let that make you go to sleep on his willingness to go compete and be a violent guy on the field,” he said. “When he’s on the field now, he’s a competitive dude, man. He’s got a mean streak in him. He’s such a great guy, and then all of a sudden he’ll go out and rip your head off.”

“I truly believe effort is between you and you, so flying to the ball every play, I think that’s just a personal decision,” he said. “I have a hunter’s mentality when I’m out there on the football field, so every time I see somebody with the ball I’m trying to hunt them down.”

He used his speed (4.52 seconds in the 40-yard dash) to chase down ball carriers from sideline to sideline. He showed good instincts and burst as a blitzer. When he arrived he delivered a wallop.

“He’s as athletic as anybody. And he’s as physical as anybody,” Odom said.

The man and player Murray’s become can be traced to his parents adopting three special needs children when Murray was 11. The two brothers and sister joined Murray and his younger sister and required “20-30” doctor appointments each week, leaving Murray to take on great responsibility at a young age.

All three adopted siblings have an extremely rare chromosome defect — Murray said a set of children in China are the only others in the world — that affects his brothers more than his sister, Nyia. James, 12, and Lenny, 14, can’t talk, can’t or struggle to walk and look much younger than their ages.

“That’s what they love the most, that I’m big enough to be able to carry them around everywhere,” Murray said. “They bring so much joy to my life because they’re just so joyful with their life. And so it just makes you think and makes you just become even more grateful. So it really leaves no excuse for anybody else to not be able to find happiness in their situations.”

There are moments in an interview where you learn something about a prospect that goes far beyond football.@OU_Football LB Kenneth Murray provided one of those moments in his interview with the #DallasCowboys. pic.twitter.com/rxq6vYKn8X

“There’s probably a special place in heaven for him and his family,” Odom said.

“So that ability to dominate interviews like he did, to fill the room with your presence, to know your defense inside and out, all that stuff at that position is huge, and it does help lift you up the board, and I do believe that it translates,” he said on a conference call. “When you miss on players, a lot of times it’s not the ability, it’s the person, and I think with Kenneth Murray, everybody that’s talked with him trusts this kid with their life. That’s an encouraging sign, and I think that does bode well for him at the next level.”