NFL Draft: Boise State’s athletic Ezra Cleveland potential left tackle choice for Browns if they trade down from No. 10 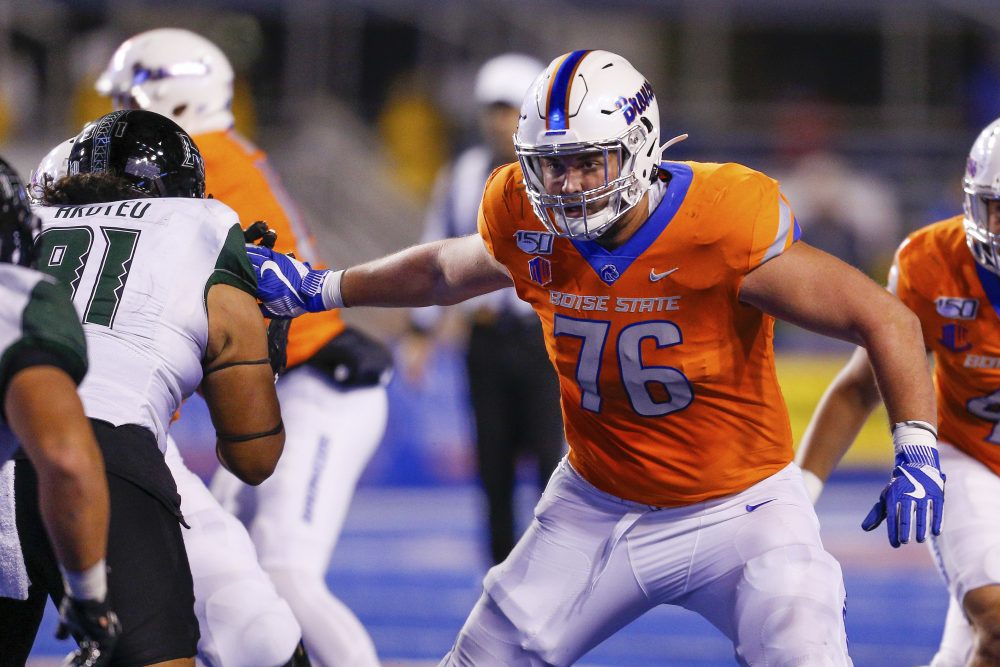 The name is perfect.

The personality works, too.

Bedell knows Northeast Ohio. Not only did he start four games for the Browns in two seasons after being a sixth-round pick in 2000, he married a native.

“My wife was born and raised in Cleveland, so I know what she wants,” he said.

Bedell believes the experience at Boise State — where Cleveland started 40 games at left tackle in three seasons — has prepared Cleveland for life along Lake Erie.

“All we pride ourselves on is hard work, physical football and doing what it takes to win,” Bedell said.

Cleveland (6-foot-6, 311 pounds) is ranked by many analysts in the second wave of tackles, along with Houston’s Josh Jones and USC’s Austin Jackson. Cleveland would be a potential target if the Browns traded down from No. 10 and didn’t get Georgia’s Andrew Thomas, Iowa’s Tristan Wirfs, Alabama’s Jedrick Wills or Louisville’s Mekhi Becton.

The Browns met with Cleveland at the scouting combine in February and have continued to show interest. Bedell said he recently got a call from the organization.

“The No. 1 thing he showed at the combine is athleticism,” Bedell said. “No. 1, what really helped him, which I knew and what a lot of people didn’t know, is that he would turn out 30 on the bench. That was impressive.

Cleveland was pleased with his performance, holding his own with the bigger names at tackle.

“I went out there and did what I wanted to do,” he told Draft Wire.

The movement skills and experience at left tackle have earned Cleveland strong reviews as a pass blocker. But there’s a lag with run blocking, with questions about his core strength.

“One thing that they say, does he have enough power through the lower body, which I absolutely think he does,” Bedell said. “Are there things that they’re going to improve on his game as he gets older and they can generate more power? Absolutely. But right now, is he strong enough to come in and compete right now? Absolutely.”

Bedell made it clear toughness and nastiness aren’t the issue, noting Cleveland was the Broncos’ knockdown champion the past two years. Cleveland acknowledges the rest of his game needs to catch up to his quick feet and that he’s more comfortable dealing with speed rushers.

“I feel like speed is easier to stop and handle. Power requires you to use more brute force,” he told Draft Wire. “With power, you really have to hone in on your strength. Your technique is really important. With speed, you can play with your feet rather than anchoring.”

Cleveland was slowed by a turf toe last season, missing a game and having his practice time limited for much of the season, which hurt his technique.

“We need to work on his pad level,” Bedell said. “Pad level’s going to be a big deal when he gets to the National Football League. And then as he improves that pad level, you’re going to see the power he really has.”

The turf toe revealed his commitment to the team, as he refused to stay sidelined.

“He’s like, ‘We’re winning a championship and I’m playing, so I don’t want to hear it,’” Bedell said.

The Browns are looking for a starting left tackle, but if they feel Cleveland needs a year to get stronger, they could sign 38-year-old free agent Jason Peters to fill the void and mentor him. Hall of Famer and former Cowboys personnel executive Gil Brandt is a fan but thinks he needs a year to mature physically.

“I like Cleveland a lot,” Brandt said last week during a SiriusXM NFL Radio conference call. “He performed unbelievably well (at the combine). He had everything going for him.

“Even when you take great players in the draft, you have to expect that it’s going to take a little time for them to get their sea legs at the NFL level,” he said. “So going through those growing pains is quite worth it because you look up after two, three, four years, and you do have that perennial All-Pro playing at a key position.”

NFL Draft: Oklahoma LB Kenneth Murray’s “rare” character stands out among top prospects
NFL Draft: Clemson’s Isaiah Simmons a “unicorn” who can do it all, including spying QBs