NFL Draft: Clemson’s Isaiah Simmons a “unicorn” who can do it all, including spying QBs 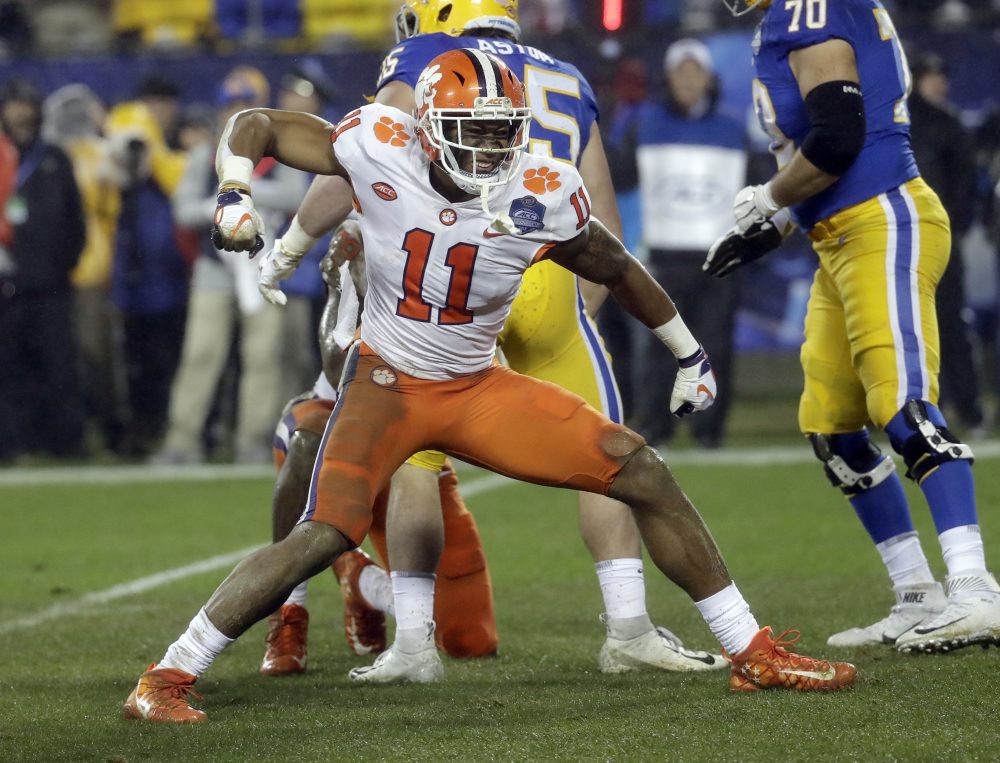 A fictional creature might be the only thing that can keep the Browns from drafting a left tackle with their first pick Thursday night.

He’s the draft’s most versatile player and maybe its best. He lined up across Clemson’s defense, made play after play and projects as a linebacker or safety — the Browns’ two biggest needs after left tackle.

“I’d love to say I’m Johnny Super Coach, but when you’ve got yourself a unicorn you let him go to town,” Clemson associate head coach/defensive coordinator/linebackers coach Brent Venables said Saturday in a phone interview.

He looks like the one guy who could cause the Browns, who have the No. 10 pick, to find a different solution at left tackle, whether by trading up from No. 41 or acquiring a veteran. General manager Andrew Berry and chief strategy officer Paul DePodesta have been adamant the Browns are keeping an open mind.

Of course, Simmons would have to last until No. 10, which seems like a stretch. ESPN’s Jeff Legwold ranked him No. 1 in the draft, NFL Network’s Daniel Jeremiah No. 3 and The Athletic’s Dane Brugler No. 4.

Venables has been a coach for 24 years and said he’s never been around anyone with Simmons’ mix of size and speed.

“We’ve had some great players, a lot of All-Americans, a lot of first-round draft picks. But just as far as the total package, I have not been around anybody with that freakish length,” Venables said. “He’s like a 6-8 guy with his length. He just chews up a lot of grass, man.

“And what I love, he’s very aggressive, naturally aggressive. And probably pound for pound he’s the strongest guy on our football team.”

The talents are obvious in the highlight reel. He throws a North Carolina running back to the side on the way to a sack. He flies up from the spot at safety to stop a Texas A&M running back in his tracks. He sprints from the middle of the field to the sideline to intercept Ohio State’s Justin Fields in the playoffs.

“It’s just such a rare combination to see guys affecting the game from all three levels,” Venables said. “Who does that?”

“I like an interception just as much as I like getting a sack,” he said at the scouting combine in February.

He relishes the jack-of-all-trades profile.

“It’s really beneficial for me,” he said. “I know years ago it wasn’t good to be a positionless guy. But now it’s become a benefit for me just because of all the versatility I’ll be able to do, play linebacker, play safety, whatever it is.”

Among the special skills is spying running quarterbacks. Venables found creative ways to assign Simmons to the quarterback, whether lining him up off the line or faking a blitz up the middle. He would lay in wait for the quarterback to make a move and then pounce in an instant.

“Obviously you’ve got to be able to run and you’ve got to have the instincts for it, first and foremost. So that automatically starts to eliminate a bunch of dudes,” Venables said. “There’s some techniques you teach with it, but if you don’t have the instincts for it, you’re asking for it. There’s nobody that has a better feel for it than Isaiah Simmons. And I’ve been doing spy techniques for a long time. He’s the best that we’ve had, by a long ways.”

When Berry, coach Kevin Stefanski and coordinator Joe Woods saw that on film, Ravens MVP Lamar Jackson had to run through their minds. He rushed for 1,206 yards and seven touchdowns last season, challenging defenses to find someone to match up.

“You can’t just draft a linebacker and expect to be able to do that,” Venables said. “It gives you a lot of flexibility.”

That’s a theme. Venables would study the opponent and devise ways to create confusion and get Simmons into a mismatch, as he crisscrossed the field in a handful of positions.

He has no doubt the formula will prove just as successful in the NFL.

“The more he plays the better he gets,” Venables said. “The higher the stakes the better he plays. There’s nothing that was too much for him to handle.”