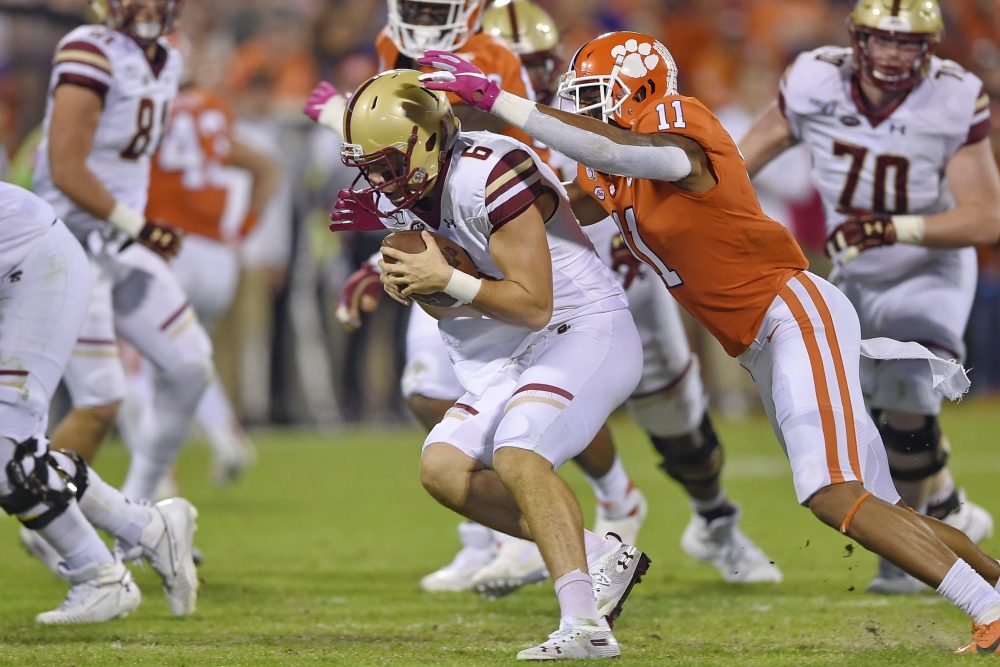 Defensive end may be the most perplexing position for the Browns as they enter the draft.

They have Myles Garrett, Olivier Vernon, Adrian Clayborn and Chad Thomas to form a solid two-deep rotation at the premier position. But Vernon is coming off a disappointing season, due $15.25 million in 2020 and would be cut if the Browns could find someone qualified to take his place.

So end isn’t a pressing need but could be a target early for first-time general manager Andrew Berry.

With Ohio State’s Chase Young expected to go No. 2 to Washington, there’s not another end considered worthy of the No. 10 pick owned by the Browns. But they could trade down in the first round or wait until No. 41.

Pass rushers are coveted across the NFL, so the Browns will have a lot of competition.

They will likely come out of the draft with an end. The question is whether he allows them to part with Vernon.

Chase Young, Ohio State: The next in the impressive line of Buckeyes pass rushers, and there’s a chance he’s the best of the bunch.

Yetur Gross-Matos, Penn State: The 6-foot-5, 266-pounder has overcome family tragedies to become a possible first-round pick. Had 17.5 sacks in his final two seasons with the Nittany Lions.

A.J. Epenesa, Iowa: Doesn’t have ideal explosion, but his strong hands and power have led to production (22 sacks in the last two years).

Teams can never have enough talent or depth on the interior of the defensive line.

But the Browns have enough of both not to worry about drafting a defensive tackle early.

Andrew Billings signed in free agency last month, joining Sheldon Richardson and Larry Ogunjobi to form a solid rotation. But none of the three is tied to the Browns long term, so drafting a tackle is possible.

Auburn’s Derrick Brown would be a stunner at No. 10 — if he’s still around — but if the right guy’s on the board starting at No. 97 in the third round, fortifying the front could easily be justified.

Derrick Brown, Auburn: The SEC Defensive Player of the Year is outstanding against the run but isn’t a big-time pass rusher.

Discussing and debating different scenarios is a vital piece of the run-up to the NFL Draft. The most popular surrounding the Browns this year: Would they take versatile Clemson linebacker Isaiah Simmons if he’s still on the board at No. 10?

He’s in the discussion as the most talented player in the class, but if quarterbacks and offensive tackles dominate the top of the draft, he could be available for the Browns. Would they view him as so valuable they’d bypass a desperately needed left tackle?

Simmons played linebacker and safety at Clemson as he moved all around the field — 107 tackles, 16 tackles for loss, eight sacks, 13 passes defensed, three interceptions in 2019 — and the Browns have holes at both spots. If he’s unexpectedly around at No. 10, they will have a decision to make.

If they don’t come away with Simmons, they should seek a linebacker or two later in the draft, especially after Christian Kirksey was cut and Joe Schobert left in free agency.

Mack Wilson impressed as a rookie last year, but Sione Takitaki didn’t play much in his first season and it’s to be determined if he fits in new coordinator Joe Woods’ system. B.J. Goodson was signed as a free agent but projects as a part-time player. So there’s room for at least one starter and depth.

Isaiah Simmons, Clemson: One of the most versatile and physically gifted players in the draft. Projected as a safety by some teams.

Patrick Queen, LSU: A big-time athlete who excels in coverage.

The Browns used the No. 4 pick on Denzel Ward in 2018 and the No. 46 pick last year — the team’s top selection — on Greedy Williams then signed former first-round pick Kevin Johnson as a free agent this offseason, so it’s unlikely they’ll use an early draft pick on a cornerback this week.

But it’s a position where depth is required, especially in the age of three- and four-receiver sets. So even though the top four corners look set — the aforementioned trio and veteran Terrance Mitchell — first-time general manager Andrew Berry must consider adding to the position, particularly starting in the middle rounds after addressing greater needs at left tackle, safety and linebacker.

The position is too important not to add to the pile in every draft.

Jeff Okudah, Ohio State: The Buckeyes keep pumping out corners, and Okudah could go No. 3 to the Lions, a pick higher than former teammate Denzel Ward two years ago.

C.J. Henderson, Florida: Faster than Okudah, and some analysts like him better.

The Browns addressed the void at safety by signing free agents Karl Joseph and Andrew Sendejo to one-year contracts. The positional overhaul should continue in the draft.

The Browns were left with only second-year players Sheldrick Redwine and J.T. Hassell after Damarious Randall, Eric Murray and Juston Burris left in free agency. Joseph is expected to start, while Sendejo is a rotational guy, and the depth chart is screaming for a draft pick in the early rounds. The No. 41 pick seems like the sweet spot.

Alabama’s Xavier McKinney is expected to be gone by then, but the rest of the safeties could be in play. The candidates range from the familiar (LSU’s Grant Delpit) to the obscure (Lenoir-Rhyne’s Kyle Dugger), and the Browns could go in a variety of directions.

Clemson’s versatile Isaiah Simmons was included in the linebackers list, so he’s not part of this discussion, even though some teams view him as a safety.

Final note: We’re skipping the specialists graphic. The Browns are solid with punter Jamie Gillan, kicker Austin Seibert and long snapper Charley Hughlett, and it would be a huge surprise if they drafted anyone at their positions.

Xavier McKinney, Alabama: Versatile playmaker could be the only safety taken in the first round.

Grant Delpit, LSU: Dropped off after a spectacular 2018 season. Must improve his tackling.

Antoine Winfield Jr., Minnesota: Had seven interceptions as a senior to become an All-American.