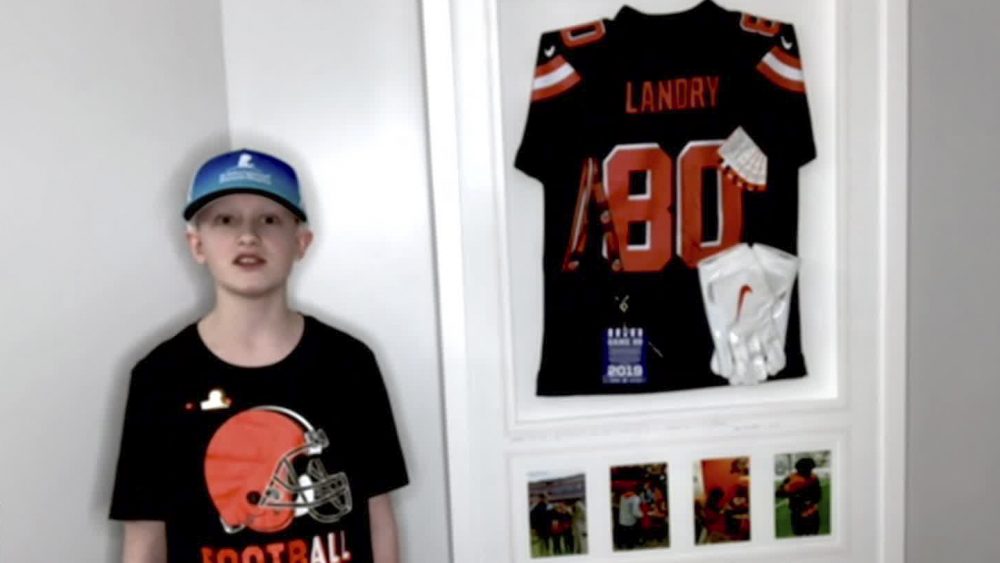 NFL Commissioner Roger Goodell got an assist Thursday night from a 12-year-old Browns fan who stood up to cancer.

Fletcher Rollinson, from Rocky River, began the introduction of Cleveland’s pick at No. 10 before handing off to Goodell during the first night of the NFL Draft.

Normally a St. Jude Children’s Research Hospital patient is onsite, but the coronavirus pandemic made this a virtual draft for the first time in history, so Rollinson recorded his part.

“Hello, NFL fans, and a special shout-out to Browns Nation,” he said. “I am so excited to help introduce the first-round draft pick for my hometown Cleveland Browns. The wait is finally over!”

Goodell finished the job by announcing the selection of Alabama tackle Jedrick Wills.

Rollinson wasn’t able to rub elbows with the first-round picks — the draft was scheduled to be in Las Vegas — but has developed a relationship with Browns Pro Bowl receiver Jarvis Landry.

Landry wore a bracelet in support of Rollinson during games, sent encouraging videos while he underwent chemotherapy and invited him onto the field before the game against the Dolphins last season.

“He’s one of the nicest people I’ve ever met. Caring, kind, generous,” Rollinson said in the news release.

He recorded the message wearing a Browns jersey and St. Jude baseball cap.

“While my journey with cancer has been hard, I cannot say enough about St. Jude. The doctors and staff are amazing, and they took such good care of me,” he said before turning it over to Goodell. “And now back to you for the Browns’ pick. Go Browns!”

Rollinson was diagnosed in July with a rare type of cancerous brain tumor and was accepted for treatment by specialists at St. Jude. A biopsy at St. Jude later showed the mass was pineal parenchymal tumor of intermediate differentiation.

He had surgery to remove the tumor, then had four rounds of chemotherapy in addition to radiation. The treatment ended last month, he’s back home and doing well.

The NFL is raising money and awareness in a partnership with St. Jude.

“I have followed this team for a long time and the Browns have been really supportive of me during my treatment,” Rollinson said. “I am so happy that the NFL supports St. Jude because St. Jude is awesome. I thank them both for this opportunity. Go Browns!”

Gov. Mike DeWine got one of the picks right for Ohio’s NFL teams.

DeWine fell in line with every mock draft in America by having the Cincinnati Bengals selecting LSU quarterback and Ohio native Joe Burrow with the No. 1 pick. Everyone was right.

“That was an easy one. I hope,” DeWine said in the afternoon.

DeWine relied on his son-in-law Nick for the Browns’ pick at No. 10. He said Nick wanted a left tackle, specifically the one from “the cornfields of Iowa,” Tristan Wirfs.

“We will see,” DeWine said.

Landry posted three short videos on Instagram of him working out inside a facility. He considered it a milestone after hip surgery in February.

“First time moving like this in 3 months!!!” he wrote.

He leaned against a wall and raised his knees, one at a time, to a 90-degree angle. He came out of a stance and raised his left knee high as he took the first step. And he high-stepped down the field, raising his knees thigh-high.

He’s expected to be ready to practice in August.

The Browns are slated to have three picks on Day 2 Friday — No. 41 in the second round and Nos. 74 and 97 in the third round. The No. 97 pick came from Houston in a trade for running back Duke Johnson.

** The 2021 NFL Draft is scheduled to be held in Cleveland. And Goodell announced Las Vegas will host in 2022.

** The Browns have drafted 34 players from Ohio State in their history, the most of any school. Cornerback Denzel Ward was most recent, No. 4 in 2018. Receiver Brian Robiskie in the second round in 2009 preceded him.