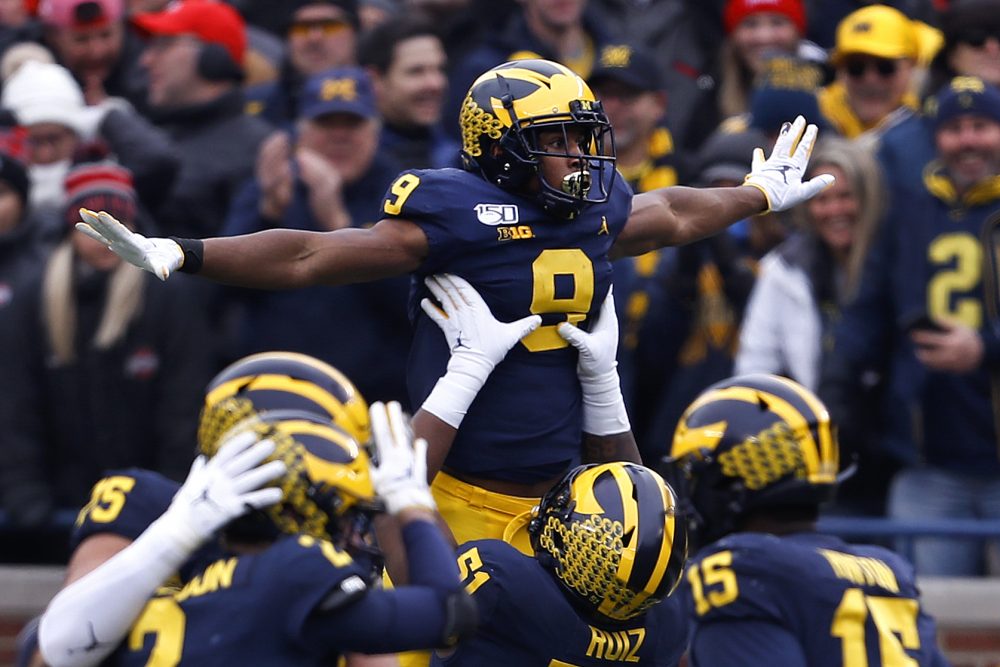 Wide receiver Donovan Peoples-Jones has something to prove.

The junior out of the University of Michigan wasn’t mentioned among the biggest names in what was considered a deep wide receiver class and fell well below his third-to-fourth-round draft projection. The Browns selected him in the sixth round at No. 187 — their final pick of the three-day draft.

“Yeah, I remember, it is a long list,” said Donovan Peoples-Jones of the 27 receivers drafted before him. “So I am definitely going to remember that.”

At least part of the reason for his fall was what many considered an underachieving career with the Wolverines. Playing with multiple quarterbacks, the five-star recruit was a three-year starter but didn’t put up the bulky numbers associated with his pedigree.


“I do not think that is a fair criticism,” said Peoples-Jones, who had 34 receptions for 438 yards and six touchdowns in 2019. “I did what I could when I had the opportunity. And it honestly does not matter now. I am looking how to get better. I am looking to do everything I can for the Browns offense and the team, in general.”

Some analysts agree the lack of production wasn’t his fault.

“He was plagued by poor quarterback play at Michigan this year,” ESPN’s Louis Riddick said of Peoples-Jones. “He’s a guy who really has tremendous athletic ability as far as being able to take the ball out of the air, adjust to the badly thrown balls. He runs some really nice speed-cut type of routes, meaning the deep overs, the slot fades where he’s making contested catches. He can really contort his body and make some circus-type catches.

“I think all of his good football is ahead of him. Because I think the offense at Michigan didn’t really feature him, the quarterback play wasn’t good enough. Hopefully he can get with a program here in Cleveland that really highlights his strengths, which is making some tough catches down the field.”

“I think it is unfair to judge a guy just based squarely on production,” Browns area scout Colton Chapple said. “Just because there are a lot of factors that he cannot control. What we saw on tape is that when he did have his opportunities, that he made the most of it and he was a very dynamic player once the offense was able to get him the ball quickly or in some of his punt return stuff earlier as a young kid at Michigan.”

Peoples-Jones brings more to the table than pass-catching ability. He was an all-purpose threat at Michigan, earning third-team All-Big Ten honors as a punt returner — honorable mention as a wide receiver — last year. He ranks second all time for the Wolverines in punt returns and punt return yardage.

His dual-threat ability was attractive to the Browns, who are in need of a third receiver alongside Odell Beckham Jr. and Jarvis Landry and potentially a return man, despite signing free agent JoJo Natson.

“I think there is versatility with this player, in terms of where you can play him in the formation,” coach Kevin Stefanski said. “I think having return ability, having a history in the return game helps. I do think he has got the physical skill set to be a special teamer. There is a lot this kid can do. Then it is going to be a matter of him showing it to us. That is the exciting part.

“With Donovan, his numbers do jump off the page at you and we all know that. Then it is our job and his job to get everything we can out of him. So we want to get the best version of Donovan Peoples-Jones. I recognize I do not want to say something too nice about a Michigan Wolverine.”

With his Browns career ahead of him, Peoples-Jones has gotten a headstart, already becoming acquainted with Beckham Jr. and Landry.

“It is crazy because I actually got a chance to meet both of them,” he said. “Actually was getting some tips from Jarvis while I was down in Florida training for the NFL combine. So me and him had started to develop our relationship and those guys are Pro Bowl guys, I just can’t wait to learn from them.

“I’m so excited to play with players like Baker (Mayfield) and Odell and Jarvis. They are really good players and I think that I can come in and soak up a lot information from them and really take it all in. I’m really excited.”

Chris Assenheimer is a sportswriter for the Chronicle-Telegram. He can be reached at 329-7136 or cassenheimer@chroniclet.com.

NFL Draft: LSU’s Jacob Phillips, a third-round pick, fits right in with youth movement at linebacker
Baker Mayfield eager to get back to Berea, excited about offseason moves, impressed with Kevin Stefanski