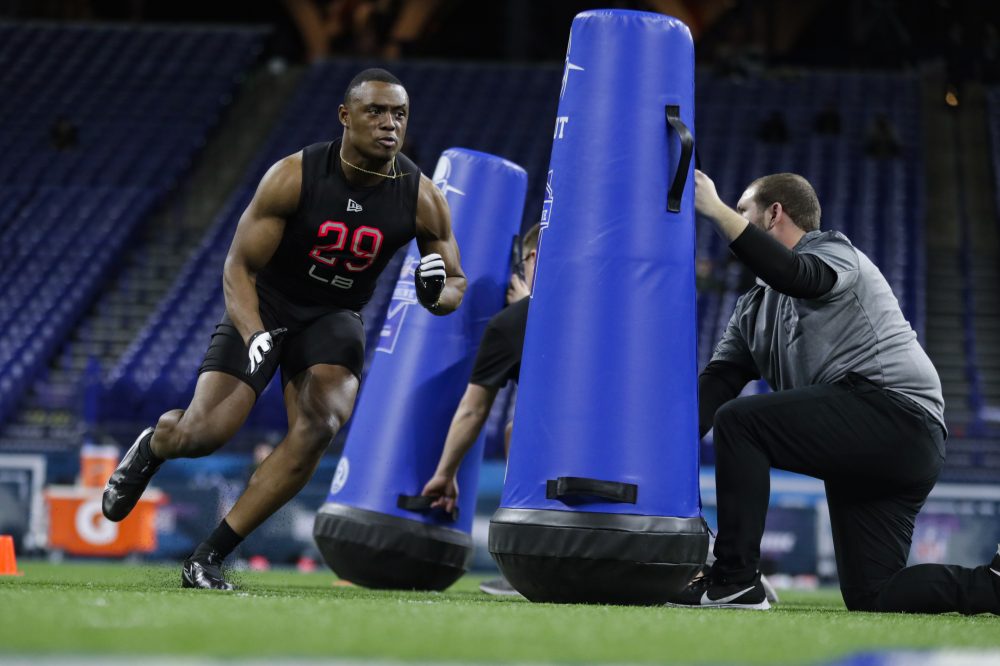 The Browns added another young face to an already youthful group of linebackers when they drafted Jacob Phillips out of LSU in the third round late Friday night.

“I think the youth is a good thing. It is a hungry group,” Browns coach Kevin Stefanski said of Cleveland’s linebackers, which include second-year players and projected starters Mack Wilson and Sione Takitaki. “We are going to roll a bunch of guys out there and see what we have. You are always looking for these guys to progress. Once we get our hands on them, we will see where they are, but I think it is a really intriguing group.”


“I think Jason Tarver, Ben Bloom and Joe Woods have some guys to work with,” Stefanski said. “The nice part is while they may be young, I really think there are a bunch of guys that understand there is a ton of work that needs to go into this. I think they are ready for that.”

“In terms of the linebacker room specifically, it is a very young group,” general manager Andrew Berry said. “You have two players (Wilson and Takitaki) who are entering their second year and another that we are adding who is a rookie, but that is exciting because it is a room of opportunity.

“Obviously, we lost Joe this offseason who was the elder statesman and very experienced. The same thing with Christian. It gives young players an opportunity to step up and establish their own roles within the system.”

The free agent departure of Schobert and the release of Kirksey cleared the path for the young guns, including Phillips.

“That was one of my key things: Coming into room where I will get an opportunity. I feel as though I will be given an opportunity in Cleveland,” he said. “I am ready to work. I am ready to put in every ounce that I can to succeed and help the team win. I just want to make sure that I bring that winning tradition I had in college to Cleveland.”

Phillips was a two-year starter at LSU, where he led the team and Southeastern Conference in tackles last year as a junior.

“With Jacob Phillips, we really liked the length, the speed and the ability to play in the system,” Stefanski said. “Those linebackers have to run. You see him running in that system they play down there at LSU. You see him running down the sideline going to make great tackles. Just a high-effort, high-motor guy. He just turned 21 earlier this month. Another young player we feel like we can develop.”

Something else the Browns really liked over the first two days of the draft was players out of the SEC. Cleveland’s first four picks, including first-round selection Alabama offensive tackle Jedrick Wills, came from the powerful league.

“We did not go into this saying, ‘Let’s only draft SEC players.’” Stefanski said. “Now, if you are only going to draft from one league, it probably would make sense to draft from that league. We certainly do not make that a huge part of our evaluation. I can tell you, though, when you are watching these guys, the lights are bright in that conference and to see the guys perform under those types of elements certainly does not hurt in evaluation.”

“I can assure you that we did not plan it, but these are all really good football players in arguably the best conference in college football,” Berry said. “It is certainly a good place to start for us, but it just happened to work out that way.”

“Having the LSU connection in the NFL is something that most people probably do not have,” Phillps said. “LSU, the group of guys there are so close. I know that those are the dudes there that will be able to take me under their wing and show me the ropes.”

“That is my brother. I love playing with him,” Phillps said. “We made so many memories at LSU, all the years that we played together. I am happy to take that next step and playing with him. I know we pushed each other at LSU so I know we are going to push each other in the league.”

Chris Assenheimer is a sportswriter for the Chronicle-Telegram. He can be reached at 329-7136 or cassenheimer@chroniclet.com.