Commentary: Meet the new bosses … hopefully not the same as the old bosses 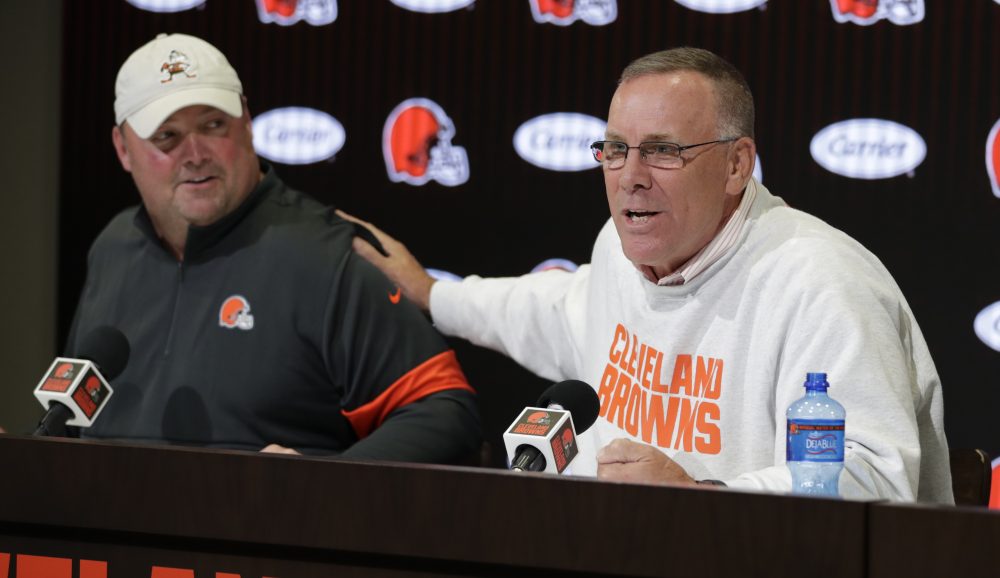 This draft was unique for a lot of reasons, but for the Browns specifically, it was, in a sense, the official coming out party for new general manager Andrew Berry and new head coach Kevin Stefanski.

Two rookies trying to dig out of the rubble left by two decades of organizational disorganization. Berry did some nice work in moving the roster needle during the free agent period, but when it comes to roster building crunch time, the NFL searchlights shine brightest on the three-day cattle drive that is the NFL Draft.

Neither man had sat in the chairs they sat in from Thursday through Saturday, as the trigger-pullers, the decision-makers, the buck-stops-here heroes.

In particular, it was Berry who was at center stage. You only get one chance at calling the shots for the first time in an NFL Draft. This was Berry’s.

“I was really impressed with the way Andrew was able to navigate these last three days,” Stefanski said.

True, Berry is also Stefanski’s boss, so parse the coach’s evaluation any way you like. But if Berry is the Browns’ new Mr. Big, Stefanski is Vice Mr. Big, so he has a lot riding on the eventual outcome of what took place the last three days as well.

Longtime Browns watchers have seen how the draft process is not supposed to work, and it is not a pretty sight. This, per ownership’s fervent prayer, is how it’s supposed to work.

“It can be very stressful,” Stefanski said. “But (Berry) did a great job. He’s built for this. I think he’s got the right demeanor, the right amount of intelligence. I was very impressed with how he operated … We got better on both sides of the ball. The plan was sound.”

As the great philosopher Mike Tyson once pointed out, “Everyone has a plan until they get punched in the mouth.”

Whether Berry has to duck and cover three years from now, when this Browns draft lays all its cards on the table, remains to be seen. What we know for certain right now is that this was Berry’s first trip into the draft spotlight, and the stakes are enormous.

Especially for a rookie general manager, who is trying to make his (Dawg Pound) bones on the NFL’s biggest offseason stage. If Berry truly is “built for this,” it won’t take long for it to be confirmed, or refuted.

This is Berry’s first time at overseeing a draft, which requires the kind of leadership that the NFL’s most successful draft overseers have demonstrably exhibited, and that Berry is trying to establish.

Part of that is orchestrating impromptu staff meetings, when the team is on the clock, in the spotlight and under the gun.

“We don’t agree on everything,” Stefanski said. “We encourage push back from each other. We don’t want a bunch of yes men.”

What Berry and Stefanski want are enough information and opinions with which to make decisions that, in time, will impact, hopefully in a positive way, the jobs they currently hold.

According to Stefanski, Berry handled those pressure-drenched meetings well.

“He knew when it was time for everyone to be quiet, and when to take input,” the coach said. “He looked like a seasoned vet to me.”

All rookie general managers tend to know the operational landscape when they go into an NFL Draft. But not all general managers go into their first draft haunted by the baggage of so many bad decisions strewn about the barren tundra of their franchise’s history, as is the case with Berry. The rookie general manager, along with the rookie coach, are burdened not only with trying to build a better mousetrap, but to build one so good that it will make everyone forget all the bad ones that came before it.

For better or for worse, this weekend was their first big opportunity to make a difference. Their first chance to prove they have the chops to walk the walk.

For that reason, the tag team of Berry and Stefanski have much more riding on their draft than the leaders of most of the other teams in the league have riding on theirs.

But there’s more to it than that. Much more.

“Just because we added players means nothing,” Stefanski said.

What those players become is what matters.

Because as the Browns’ previous GM/coach coupling proved, a coming out party can very quickly turn into a going away celebration.

NFL Draft: Browns should have plenty of attractive options at No. 41, including numerous safeties
Commentary: Baker Mayfield has what he needs now, so he needs to show he’s up to the job