Commentary: Baker Mayfield has what he needs now, so he needs to show he’s up to the job 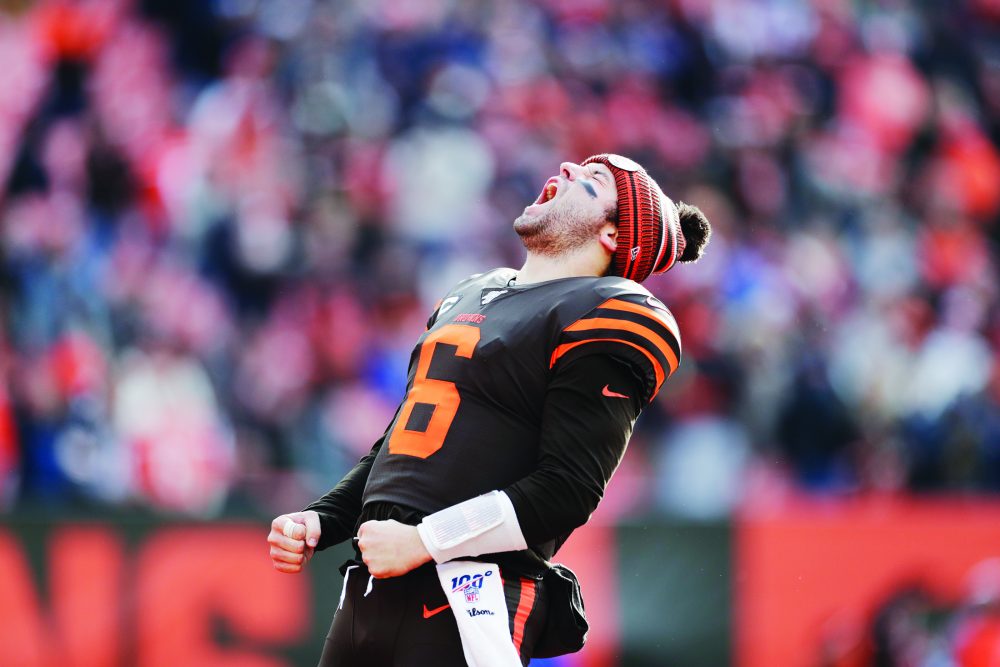 The biggest winner in the NFL Draft?

No Browns player has more riding on the 2020 season. No NFL team, therefore, had a more obvious position to address with its first-round pick than the Browns.


Mayfield knew it and the Browns knew it. They addressed it. He’s happy.

The Browns addressed it by selecting a big nasty, Alabama tackle Jedrick Wills, with the 10th pick in the first round. With the drafting of Wills, Browns general manager Andrew Berry finished a complete overhaul of the two most important positions on the offensive line: left tackle and right tackle.

Mayfield has been sleeping soundly ever since.

Last year, the two tackle spots on the Browns’ offensive line had orange construction barrels around them and opposing edge rushers barreling through them like runaway 18-wheelers on the Ohio Turnpike.

Mayfield learned it’s hard to complete a pass when you’re looking for receivers through the ear hole of your helmet.

Berry hasn’t just put a Band-Aid on those positions, he’s built a fortress on one side and hung a “Beware of blunt force trauma” sign on the other.

That’s all good news for Mayfield, who needs some good news coming off his bad news 2019 season, which he mostly spent running for his life while trying to keep certain members of the offense happy with his ball distribution.

Going forward, Mayfield also should benefit from the coaching change, which should help him put the wheels back on his career. As everyone knows, the Freddie Kitchens roll of the dice by John Dorsey cost both men their jobs and the Browns their season.

Order seems to have been restored with the hiring of Berry and head coach Kevin Stefanski, both of whom have given early indications that they “get it.”

Gone also, or at least seriously diminished, is the circus-like atmosphere that surrounded the team last year with the addition of Odell Beckham Jr. and others, with Mayfield coming off a record-setting rookie season, the signing of former NFL rushing champion Hunt and with Kitchens, who seemed like everybody’s favorite uncle, at the wheel.

We all know how that worked out.

This year, the Berry/Stefanski coupling seems to have put the brakes on the runaway hysteria — first good, then bad, then very bad — from last year. All of a sudden, the Browns seem like they’ve finally gotten the horse in front of the cart.

The measured, methodical, appropriate moves made thus far by Berry & Co. seem to have brought traction away from last year’s noisy, get out from that kitchen and rattle those pots and pans approach.

That, again, is good news for Mayfield, who will enter the 2020 season with more pressure on him than any other Browns player. The front office has surrounded him with still more weapons and, at each tackle, a combined 620 pounds of protection. He’s got multiple, playable receivers outside, in the slot and at tight end. He’s also got two Pro Bowl-caliber running backs, plus a new head coach who won’t call a halfback pass on third-and-1 from the Browns 28-yard line or a draw play on fourth-and-9 from the opponent’s 40.

After his brilliant rookie year, Mayfield had some legitimate excuses for his train wreck second season. Those excuses were not just legitimate, but plentiful, starting with concerns about his self-preservation while working behind a Swiss cheese offensive line.

This year, with the free agent period and the draft now completed, there are no more excuses, legitimate or otherwise, for the No. 1 pick in the 2018 draft.

In the coming season, barring any major injuries, Mayfield has everything he needs to return to the quarterback he was in 2018, when he set an NFL record for touchdown passes by a rookie (27) and did so while starting only 13 games.

That’s the Mayfield the Browns need to see this year. Anything less than that and it’s a one-way ticket to Uh-ohville.

A cynic would suggest that Browns officials were hedging their bets on Mayfield when they signed Case Keenum to a three-year, $18 million contract. That’s quite a commitment for a team whose backup quarterbacks in recent years have been Cody Kessler, Kevin Hogan and Garrett Gilbert.

On paper, though, it should be an extremely interesting and exciting Browns season.

Assuming they play it.

Commentary: Meet the new bosses … hopefully not the same as the old bosses
Analysis: Pressure’s on Baker Mayfield, Kevin Stefanski to keep up in always rugged AFC North