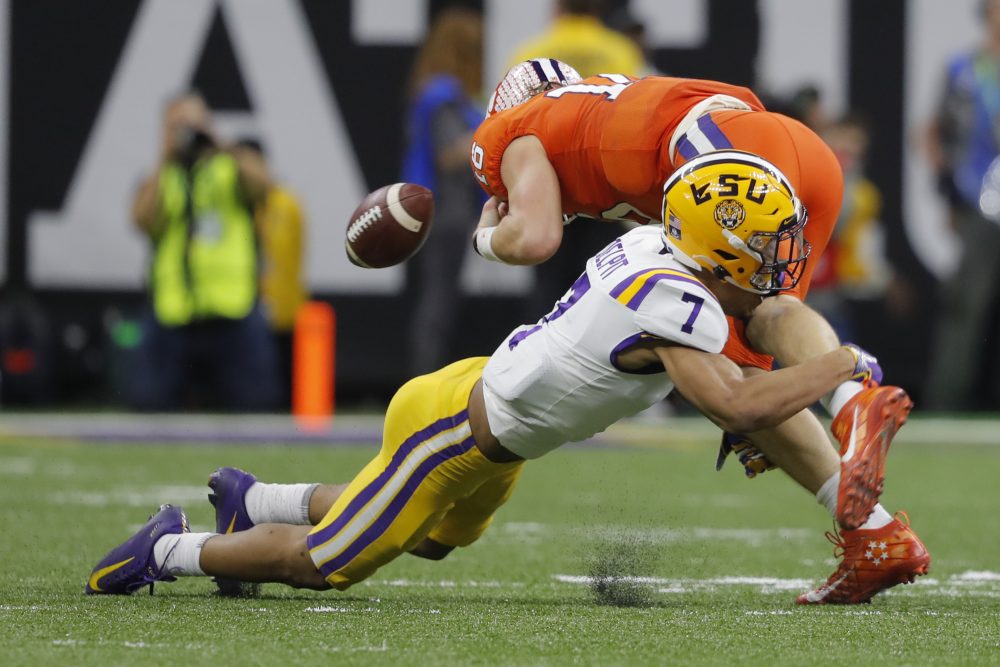 Safety Grant Delpit moves in front of the first-down marker, stays under control, squares his body and plants his gold LSU helmet on scrambling Clemson quarterback Trevor Lawrence’s left arm, unlocking the cradle and causing the ball to drop to the ground.

A Tigers teammate recovers the fumble with just under four minutes left, and LSU’s national championship is secure. Delpit does a little dance and hugs linebacker Jacob Phillips, who three months later would follow Delpit as a Browns pick on the second night of the draft.

For all the discussion of Delpit’s tackling problems, he ended his career with a textbook takedown that will be immortalized in LSU history.

“I think it’s really fitting that the end of the year he closes out the national championship game,” Baylor coach and former LSU associate head coach/defensive coordinator Dave Aranda told The Chronicle-Telegram in a recent phone interview. “What a cool full circle that has been. That’s a credit to Grant.”

Aranda used the example as evidence Delpit will continue to improve the weakness with the Browns, who selected him at No. 44 in the second round last month. Aranda said Delpit (6-foot-2½, 213 pounds) was always a willing tackler but developed bad habits on his way to 38 missed tackles in his last two seasons.

“There’s times where those initial tackles were tracking issues, were wrap-up, take-the-extra-step issues, then I think once some of the critiques came, it became, well, I’ll show them, I’m going to light this guy up and going outside of the technique,” said Aranda, who coached Delpit for his three seasons at LSU before heading to Baylor after the title game. “To realize the folly in that and to learn from it and come back a better player overall and a healthy one along with it, it’s everything.

“There’s a lot in that young man. Because for him to go through all of that, that wasn’t easy. and to continue to try to play when you’re injured, being critiqued in the process of doing it, is tough. So I think he’s better for it.”

The injury was a high ankle sprain that Delpit largely played through in 2019, missing only a game. Aranda called it a “major” factor in the drop-off in Delpit’s play from 2018 to 2019.

He had five interceptions and five sacks as a sophomore in 2018, becoming a unanimous All-American selection. He dipped to two interceptions and two sacks last season but still won the Jim Thorpe Award as the nation’s top defensive back.

“I was so proud of the way he handled everything,” Aranda said. “In a lot of ways it was a rough season for him. The ability to stay the course and to learn when there’s opportunities to learn and to finish strong, that’s all you can ask for.”

Delpit eager to put tackling problem, questions in past

Browns general manager Andrew Berry said he was impressed Delpit didn’t use the ankle injury as an excuse for the missed tackles, and cited his ability to make plays from a variety of spots.

“He has been an impact player for LSU over the past two seasons,” Berry said during the draft. “He has been a consistent ball producer throughout his career at LSU.”

Aranda believes Delpit is “most naturally gifted” playing single-high safety in the post but pointed to his versatility as a “great strength.”

“Grant brings great work ethic and a natural football IQ,” he said. “Off the field he’s also very intelligent. But on the field, I think things come easy to him. During the time he was with us, he was always one of our best, if not our very best, processor.”

The intelligence and instincts allowed Aranda to use Delpit to cover the deep middle, near the line as a strong safety and in the slot as a big nickelback.

“He was very productive in that position, blitzing off the edge,” Aranda said. “He’s got a talent for covering tight ends. He’s talented setting edges in the run game and all that you do.

“The post is probably where he’s the most naturally gifted. His range and his instincts are all very real. He separates himself pretty distinctly there. But his ability to play all of those roles and interchange them within a game, or by first down to second down to third down, that makes him unique, as well.”

After Delpit raised eyebrows during the draft when he declared the Browns’ secondary the best in the NFL and predicted he’d intercept No. 1 pick and former teammate Joe Burrow as many times as the Browns face the Bengals, Aranda surprised when he called Delpit “quiet.”

“He’s going to do his talking on the field,” Aranda said. “Grant’s observing and he’s locked in, he’s seeing it, he’s knowing it. So when he does talk, people listen to him, because it’s coming from the heart and he’s put some thought into it.

Aranda laughed when told about Delpit predicting picks of Burrow. He insisted Delpit’s defensive backs table was the quietest at team dinners, which was in sharp contrast to the previous secondaries that included future NFL players Jamal Adams, Tre’Davious White and Donte Jackson.

“But when you’re talking, does he have confidence? Or does he have a belief in himself? Will he let you know that?” Aranda said. “That part is definitely true. He’s got a strong confidence in himself.”

Aranda raved about Delpit’s family, which stayed together while moving from New Orleans to Houston after Hurricane Katrina then back.

“He’s got a great heart. Has great character. Grant was never on a list, never on anything that was any shape or form negative.”

Delpit will again share a secondary with former LSU cornerback Greedy Williams, Cleveland’s No. 46 pick in 2019. Aranda believes the reunion will benefit both.

“So for a guy that can play man coverage with zone eyes at times, a lot of times that’s a no-no, but Greedy makes that work and takes it to a new level. When you have somebody like that, that’s so talented and so instinctive, it’s really good to have somebody behind him that you trust and that knows him and are on the same plane. They’re going to have that history and that ability, it’ll be cool to see.”

Baker Mayfield eager to get back to Berea, excited about offseason moves, impressed with Kevin Stefanski
B.J. Goodson confident he will start at middle linebacker, lead young group to success