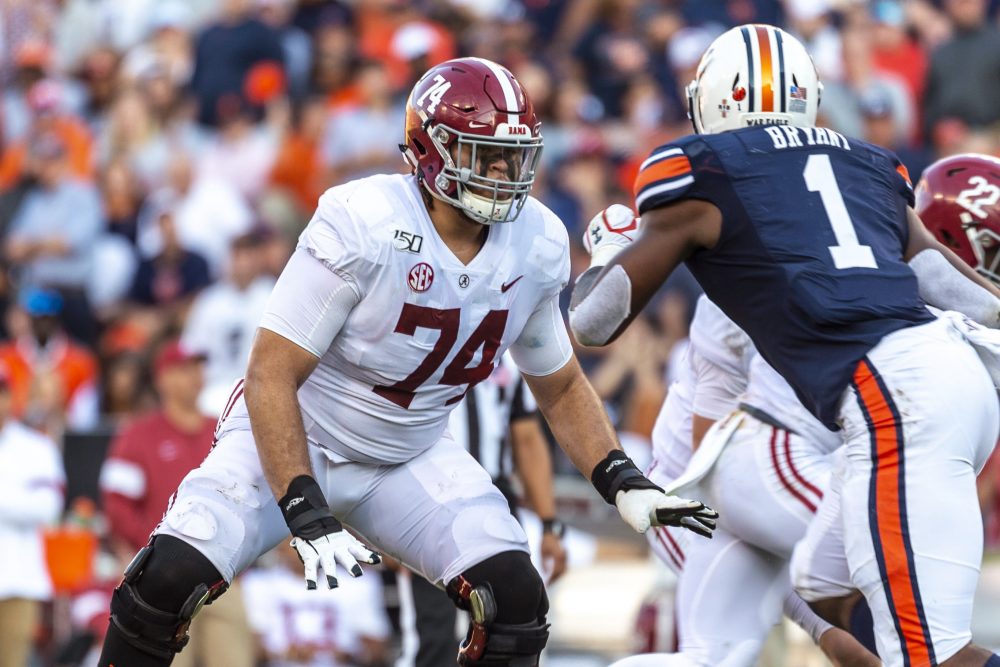 “You can feel him on film. He came alive on tape,” Callahan said Thursday on a Zoom conference call with reporters.

With Callahan’s recommendation, the Browns drafted Wills out of the University of Alabama with the No. 10 pick April 23.

“You got excited about what he was doing throughout the course of the game,” Callahan said. “A lot of times people talk about makeup and they talk about character, and all these other things, which are great, which he does have. He has got these intangibles that show up in tangible ways on film.

“Where you watch him finish, you watch the detail, the technique. You watch his consistent effort and his stamina throughout the course of the game — from start to finish. That was the appeal for me.”

Wills’ transition to the left side began before the draft and has continued, but it’s made more difficult by the lack of an in-person offseason program. All Callahan’s coaching has been done remotely, but he’s committed to starting Wills at left tackle Week 1 against the Ravens despite him being a right tackle in high school and college.

“Whenever you draft a player as high as we’ve drafted Jedrick, I’ve always felt that you’ve got to plug him in and play him immediately,” Callahan said. “I mean, that’s why you draft him. So, no, that doesn’t concern me, scare me, bother me in any respect, so I’m quite confident that he’s capable of being our left tackle.

“They’re going to go through some lumps, and they’re going to have some times where they’re going to get beat, but the best in the game get beat. What we’re trying to do is establish kind of a mode of consistency with him so that he can get confidence in his techniques and be that consistent player for us. And then I really put a lot of stock in the rate of improvement over the long haul of the season.”

Callahan is a 40-year coaching veteran, including six-plus seasons as a head coach. He never could’ve imagined an offseason spent coaching through a laptop from his home.

“It is crazy,” he said. “Nine weeks ago, I had never heard of Zoom. Now I am trying to buy as much stock as I can. It is challenging, but it is also fun.

“No, I never thought this would happen in a zillion years and not in my lifetime, but I think we are all adapting.”

The approach with Wills is two-pronged. Callahan is teaching and grilling the linemen on coach Kevin Stefanski’s system — with the wide zone run scheme as its base — and he’s giving Wills a number of physical drills to practice.

“We have just really started out with real basic things,” Callahan said. “Just really looking at stance and putting him in the left-handed stance, which he has been there before. What we have done is we have gathered a lot of video, he sends the video back and I can coach him through all of the nuances and techniques of what we want to get him into.

“I have also sent him and we will sit down and watch tackles that I have had in my career that have done the same types of things. It has been really positive. He is really a sponge of information. He has absorbed all the content that you can give him and he wants more. I am really excited about him. I am eager to at some point get on the field with him.”

Callahan famously helped Dallas’ Tyron Smith make the switch from right tackle to left tackle, and Smith has gone to seven straight Pro Bowls. Callahan also mentioned Barry Sims, who made the conversion for the Raiders.

“I really thought Jedrick reminded me of Barry in that he could make that switch easily because of his athleticism,” Callahan said.

He’s also comfortable Wills has the other qualities needed for the move.

“You have to want to go over there,” Callahan said. “Tyron was really wide open to it. Nothing fazed him because he is such a competitor. When we made the switch, it was seamless for him.

“From a muscle-memory standpoint, you have to get a groove. A lot of that really depends on the training, the reps and all that, but when you are grooving a player, they need constant, consistent reps day in and day out to get their game up to the level that you want it. It is interesting, some guys can make the switches and some guys can’t, but it is always fun. If they want to do it, they will make the switch.”