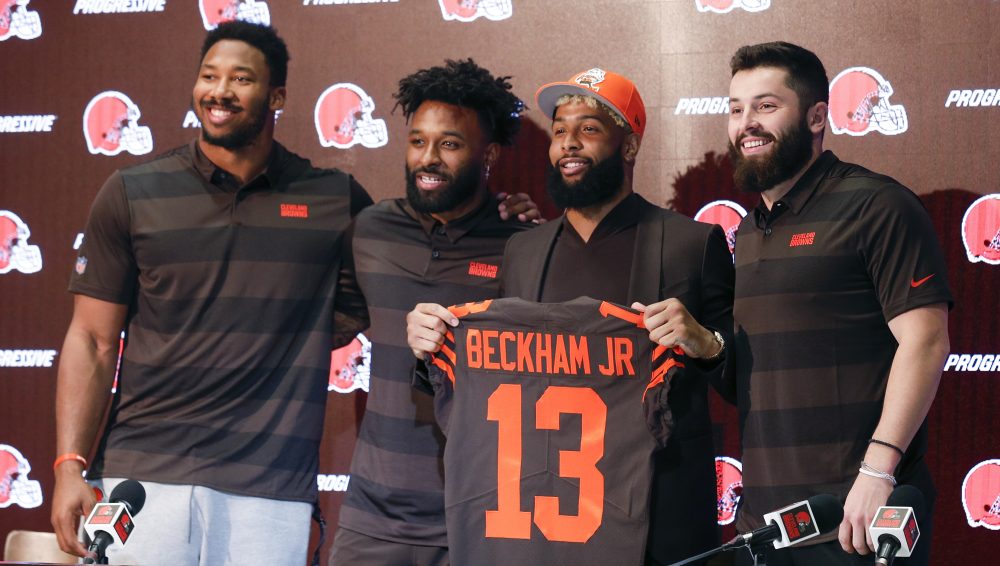 Defensive end Myles Garrett saw the opening and took it.

For the Browns’ sake, hopefully it’s all good-natured.

Garrett started the potentially painful trip down memory lane by tweeting a short video from ESPN’s “The Last Dance” of Dennis Rodman and Karl Malone exchanging butt slaps at midcourt after getting tangled during the 1998 NBA Finals.

How @obj thought spanking the cop was gonna go💀💀 pic.twitter.com/AzSRITQ4VI

Garrett was referencing Beckham appearing to slap a stadium security officer on the butt in the locker room following LSU’s national championship win in January at the Mercedes-Benz Superdome in New Orleans. An arrest warrant for Beckham was obtained by police then rescinded.

Beckham’s comeback flashed back to Garrett clubbing Steelers quarterback Mason Rudolph on top of the head with Rudolph’s helmet at the end of Cleveland’s win Nov. 14. Garrett was suspended for the final six games of the season but has been reinstated by Commissioner Roger Goodell.

“Wait a min!!!!” Beckham tweeted Monday afternoon. “That wasn’t even the worst part …. the worst part was I got charged wit assault….. and u somehow didn’t !!! (six crying face emojis) only in America”

Garrett replied with three crying face emojis and a picture from “The Last Dance” of Michael Jordan and Pacers coach Larry Bird embracing after the Bulls eliminated the Pacers in the Eastern Conference finals. The subtitles from Jordan read: “You b—-, f— you.”

Beckham then tried to put a positive spin on the back-and-forth.

Starting with nine loud crying face emojis, he tweeted: “MY BROTHER!!!! We on some shxtttt this year! U kno it’s all LUV”

The Browns are holding their offseason program virtually due to the coronavirus pandemic, so the players haven’t formally been together since last season ended.

“The Last Dance,” a 10-part documentary on Jordan and the Chicago Bulls, concluded Sunday night.