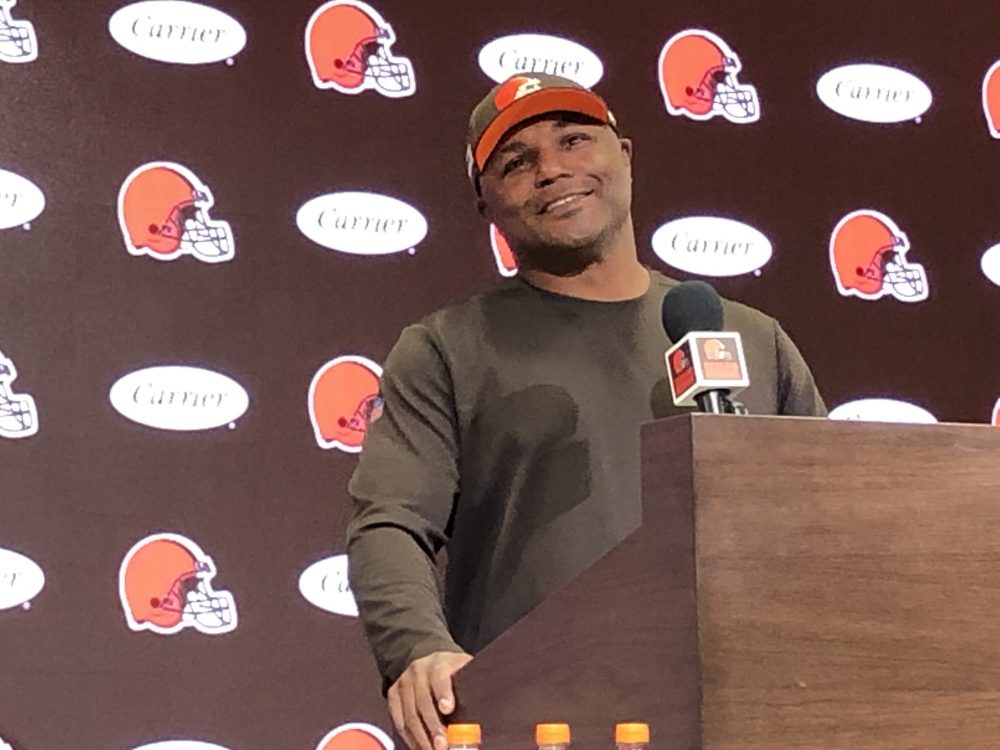 Sure, coordinator Joe Woods is intrigued by the possibility of signing free agent defensive end Jadeveon Clowney. General manager Andrew Berry remains interested in the No. 1 pick of the 2014 draft, and Woods appreciates the talent and potential Clowney would bring.

“Obviously he’s been a really good player in this league,” Woods said Thursday on a Zoom conference call with area media. “Great pass rusher when he was in Houston and Seattle. Just really affects the game.”

But Woods isn’t obsessed with landing Clowney. He’s confident in the talent and depth already available on his line.

“I feel really good about it,” Woods said. “I’ve been part of teams, going back to Denver and San Francisco, where everything started upfront. I feel like we can really do some things in the run game and the pass game with the guys that we currently have.”

Any discussion about the line starts with end Myles Garrett, the No. 1 pick in 2017. He had 10 sacks in 10 games last year before being suspended for the final six after ripping off the helmet of Steelers quarterback Mason Rudolph and hitting him over the head with it.

“Myles has the right mindset in terms of wanting to be MVP and all that. But we just need him to be the best player for us that he can be. And whatever happens happens,” said Woods, who was hired in February. “Right now I think he’s in a good place. As a young player in this league you go through a lot of different things, so I definitely think he’s going to learn and grow from the situation that happened last year.

“We really haven’t talked about it, after he got reinstated. But he’s focused on getting better, he’s focused on being a good teammate, he’s been in the meetings, he’s trying to step up and take more of a leadership role. I definitely think he’s moving in the right direction, has the right mindset.”

Notes: Woods says rookie safety Grant Delpit can do it all, just needs to be more consistent as tackler

Having Garrett and Clowney as bookends would certainly grab the attention of the NFL world, and Woods is familiar with loaded lines. He spent last year as defensive backs coach/pass game coordinator for the 49ers, who went to the Super Bowl behind a front four led by Nick Bosa, DeForest Buckner, Arik Armstead and Dee Ford.

“It took time because you have a bunch of alpha dogs out there and they all want to be the guy,” Woods said. “What they learned in San Francisco, and I think the guys here will learn, is that if you all work together, everybody is going to eat. That is what you want. You do not want anybody going hungry, right?”

Cleveland’s counter to San Francisco is Garrett, Olivier Vernon and Adrian Clayborn at end and Sheldon Richardson, Larry Ogunjobi, Andrew Billings and rookie Jordan Elliott at tackle. Richardson was picked No. 13 by the Jets in 2013, and Clayborn No. 20 by the Bucs in 2011.

Woods said Berry is the person to ask about Clowney and that he keeps up on the pursuit through the media.

“I read the articles, too. I see him with us, Tennessee, see all these teams,” Woods said. “But really right now all I’m really focused on is coaching the guys we have.”

Clowney, who’s dealt with a variety of injuries and played all 16 games only in 2017, has been on the market for more than two months. ESPN’s Adam Schefter said Wednesday on ESPN Cleveland that Clowney’s “balked” at joining the Browns despite them making the highest offer.

He reportedly sought $20 million a season at the start of free agency but had lowered the ask to $17 million or $18 million. He had three sacks in 13 regular-season games last season with Seattle, and his career high is 9.5 in 2017 with Houston.

“I want to let people know I’m ready, and whoever I sign with is gonna get the best version of me,” Clowney told Houston’s Fox 26 earlier this month. “I know what’s going on in the world. It’s a slow process until teams can see me and see what I got and can give me physicals. I’m just waiting on the right opportunity.”

Berry has consistently said he’ll be aggressive in adding talent to all parts of the roster and will use any avenue.

Clowney, 27, would likely replace Vernon, 29, who was acquired in March 2019 in a trade with the Giants. Vernon had 3.5 sacks in 10 games last year, missing six in the second half of the season with a knee injury. His career high was 11.5 sacks in 2013 with Miami.

He’s due to make $15 million in salary in 2020, so there’s been conjecture since January that he could be cut.

“All my conversations have been good with him,” Woods said of Vernon. “I get on the phone and talk to him personally, he’s ready to go. Me and him just had an honest conversation.

“He’s been great. He’s 100 percent attendance. In all the meetings he’s been there, he’s speaking up, I know he’s done really well on his tests, he’s scored 100 percent on a lot of them. I just think for him, he really wants to just come back this year and play healthy and show everybody what he’s capable of doing. So far he’s been great.”

“I feel like he’s in good shape,” he said. “Obviously until he gets in front of our medical staff, but all indications are that he’s healthy and ready to go.”

The line was expected to dominate last season but it didn’t happen. Garrett’s suspension and Vernon’s injury also exposed a lack of depth that Berry spent the last couple of months addressing.

Clayborn and Billings were signed in free agency and Elliott drafted in the third round. Clayborn brings experience — nine seasons, 36.5 sacks — and versatility.

Baker Mayfield knows he has to play better in important Year 3, vows to focus on working not talking
Browns to reopen facilities Monday for limited number of employees