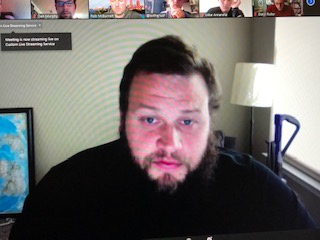 Coach Kevin Stefanski opened the week of virtual meetings Monday with a discussion about the death of George Floyd when a Minneapolis police officer kneeled on his neck for nearly nine minutes and the protests and riots that have followed.

Left guard Joel Bitonio felt the discussion was productive and the players can turn the words into action.

“The conclusion we came to is obviously there is injustice in this world right now, and people are hurting,” he said Tuesday on a Zoom conference call with area media. “People need help, and we are going to try and use our power in our position to help them.”


Defensive end Myles Garrett sprang into action, offering Tuesday to help the family of David McAtee, who was shot and killed while Louisville Police and National Guard soldiers enforced a curfew early Monday.

“If anyone can get me in contact with the family, I’ll take care of anything they need.” Garrett tweeted Tuesday. “No body cams??? Not one? Then left his corpse on the street? FOR 12 HOURS? Nah man, this is despicable. He deserved better. #DavidMcAtee”

If anyone can get me in contact with the family, I’ll take care of anything they need. No body cams??? Not one? Then left his corpse on the street? FOR 12 HOURS? Nah man, this is despicable. He deserved better. #DavidMcAtee https://t.co/Du9QFGAX58

Landry spoke for about 10 minutes during the Monday meeting and became “emotional.”

“Just tried to tell us how we can use our platform a little bit better because I think the vast majority of people want to help and want to improve the situation,” Bitonio said. “He wanted change and he wanted to be a part of it and really try to help the movement.”

Landry has been vocal on social media in the last several days, saying President Donald Trump isn’t a leader, calling for people to vote and demanding change.

“We need a end goal!!” he tweeted Saturday. “We have stories that go on for thousands of years about the police brutality, racism, death!!! The protesters that’s out now are putting themselves in further danger and not without reason but what are we trying to accomplish??”

Stefanski spent the previous 14 seasons with the Minnesota Vikings and only last month moved to Northeast Ohio after a delay because of the coronavirus pandemic. Bitonio said Stefanski provided players with ways to help in the community and urged them to vote at the national and local levels.

“What can we do locally to help?” Bitonio said. “Then it is going back and giving to the kids that need the help. I think hate is really, truly taught throughout the world, and if you can get to younger kids and grow and show that everybody, we are in this together, this is our one world and we can grow and be the best people and treat people with respect, that is where we have to start.”

He stressed the action must be consistent.

“To truly make a difference, we have to continue to push this dialogue past just this week or this month and continue to try and fix the issues,” he said.

Bitonio believes the NFL, its owners and players should also use their enormous visibility to promote love in this painful time.

“People listen, kids listen. You start the younger generation and you teach them to love each other and to have that compassion and empathy for other people,” he said. “And I think that’s where it grows in this country, and so I hope players and ownership and the NFL as a whole uses the platform to really promote that love.”

While Bitonio said most people want to help get rid of racism and social injustice, he stressed the importance of listening to others.

“Some of my best friends in life have been through some really, really tough situations with law enforcement, or just in general,” Bitonio said. “You try and listen and understand what they’re going through.

“I think people are hurting, though. I think there’s a real hurt and a real cry for help and they want people to listen to them and understand where they’re coming from.”

The Browns and the Columbus Crew soccer team, both owned by Dee and Jimmy Haslam, issued a statement Monday saying sports can be a “great unifier” and they must elevate efforts to be “a positive and productive change agent off the field.”

“We take great pride in our city and in our region and recognize the suffering in the African American community throughout the country,” the statement read. “Although, we, like many others have worked to advocate for social justice, now more than ever, we must do even more to work collectively to end racism and bond together for justice and equality.”

Bitonio praised the Haslams’ previous work in the community, which included Neighborhood Equality and Unity Summits that featured frank discussions between Cleveland police, fire and EMS, students of Cleveland high schools and Browns players after some players kneeled during the national anthem to protest racial injustice.

“They have given back tons, they continue to give back and they are open to discussing things with players and want to know where their money should go,” Bitonio said of the Haslams. “It has been an honor to be in that system with them.”