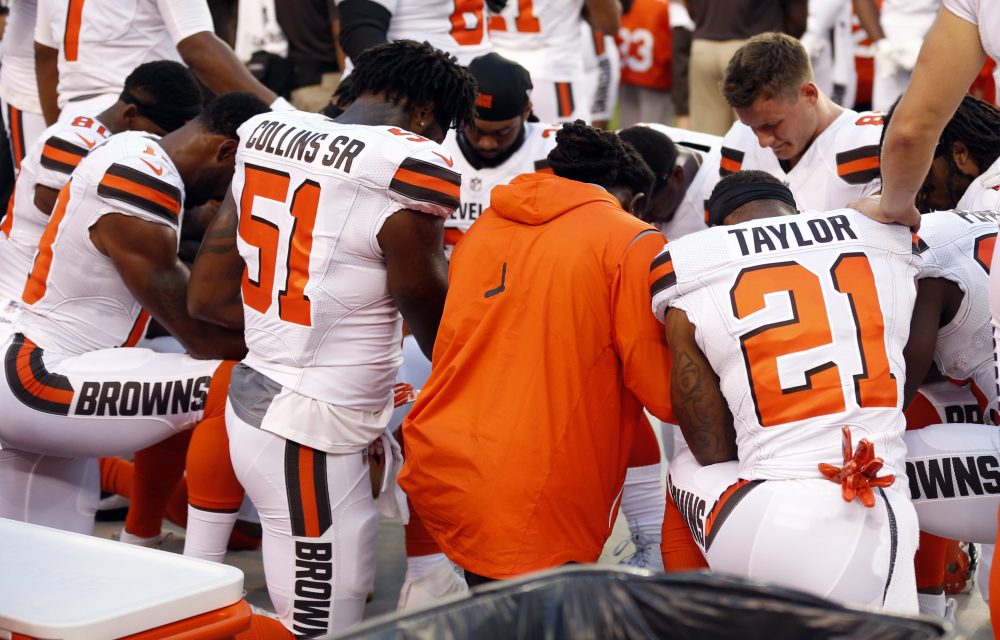 Protesters across the country have taken a knee over the last two weeks, sometimes accompanied by police officers, in the memory of George Floyd, who was killed May 25 when a Minneapolis police officer kneeled on his neck for nearly nine minutes.

Floyd’s death and the demonstrations that have followed reignited a conversation about whether NFL players will take a knee during the national anthem when the season begins.

Browns coach Kevin Stefanski vowed Wednesday to support his players and work to make sure the team will be united in its actions. He said the discussion of whether to kneel has begun but a decision won’t be made for a while.

Kneeling during the anthem remains an inflammatory topic for many. Saints quarterback Drew Brees faced intense backlash from teammates and others when he denounced it again last week, then changed his opinion after conversations with friends, teammates and leaders in the black community.

“I realize this is not an issue about the American flag,” Brees wrote in a social media post addressed to President Donald Trump. “It has never been.

We can no longer use the flag to turn people away or distract them from the real issues that face our black communities.”

Trump had criticized Brees for changing his stance.

About a dozen Browns players kneeled during the anthem in the 2017 preseason after the deadly white nationalist rally in Charlottesville, Va. The players stopped kneeling after ownership promised to work for criminal justice reform, and the organization held neighborhood equality and unity summits and donated money.

More than 20 Browns players kneeled again during the regular season after Trump attacked protesting players, calling them “sons of bitches” and saying they should lose their jobs. The players had the support of owners Dee and Jimmy Haslam.

Stefanski said he wants unity among the players and coaches but doesn’t know if that means the whole team will agree on what to do during the anthem.

“That is one of many issues we need to talk about in this movement, if you will,” he said. “That is something that I promise you we will spend as much time as necessary as an organization listening to each other, understanding each other and then we will make a decision together. I hesitate to say because I want to make sure that I am sitting with our guys on things like that.”

Stefanski plans to create a social justice committee when the team is finally allowed to assemble. The offseason program has been held virtually due to the coronavirus pandemic, and the players are scheduled to report for training camp in late July.

“We will make sure that we have a leadership committee,” Stefanski said. “The good news is we have some guys who are leaders already right now, guys that I can pick up the phone — and I have — to call and get some feedback, I can ask them questions and they can ask me questions. I am comfortable from that standpoint.”

Some of the league’s prominent players, including Browns receivers Odell Beckham Jr. and Jarvis Landry, recorded a video last week demanding the NFL take action against racial injustice. Goodell responded with a video the next day, admitting the league was wrong for not listening to players earlier and encouraging everyone to speak out and peacefully protest.

“We, the NFL, believe Black Lives Matter,” he said.

Stefanski was asked about his reaction to Goodell’s statement.

“I am just so keen on dialogue with our players and listening,” he said. “My big note to our players is that I have their back, and that is not just lip service. I am standing right there beside them. They have my support, and I promise you one thing, we will just continue to listen to each other from a place of mutual respect.”