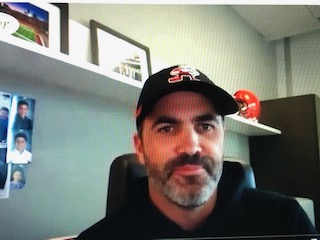 First-year coach Kevin Stefanski is back in his office after more than two months working from home — first in Minnesota, then in Northeast Ohio.

He returned to Browns headquarters in Berea on Friday but will need more time to get acclimated. The NFL instituted strict safety guidelines to prevent the spread of the coronavirus.

“The building, I would say it is interesting,” Stefanski said Wednesday on a Zoom conference call with reporters. “There are some street signs and one-way hallways, and you are wearing your mask everywhere and you maintain social distance. These are the protocols, and this is to stay safe and this is to make sure that we have a safe environment for our staff, for our entire building and for our players. This is what is required, and we are going to adhere to the protocols to the T.

“It is different, though, as you can imagine. When you are walking around the building and you are wearing those masks, you kind of have to stare at them real closely to see who that person is. It has been interesting.”

NFL Commissioner Roger Goodell closed buildings March 25 but allowed them to partially reopen May 19. The Browns elected to wait until June 1 to begin Phase 1. Goodell permitted coaches to return Friday.

Coach is back in Berea pic.twitter.com/DslbqcUuCK

Stefanski was joined by some of his staff, but players still aren’t allowed unless they were rehabbing in the facility before the shutdown. The NFL sent a long memo Monday with detailed requirements for when players come back, including social distancing within the locker, weight and meeting rooms and video meetings whenever possible.

In the meantime, the virtual offseason program will continue for another two-plus weeks.

“Nothing has changed from a standpoint of how we are reaching our players and teaching the systems,” Stefanski said. “What we did with this building being open, we have made it optional for our coaches who are in town that want to come in to work from their office like me. It is amazing, all of the guys who have kids rushed into the office — shocking.

“The guys who are getting their work done in their own home office are the guys who are out of town. We did not feel the need to mandate that they be here while the players are not here so we are continuing on our Zoom curriculum.”

Stefanski promises to support players, remain united when asked about potential of kneeling during national anthem

The Browns were planning to practice against the Packers before their preseason game Aug. 22 in Green Bay, but the NFL won’t allow joint practices this summer because of the pandemic. The league also mandated teams hold training camp at their facilities rather than off-site, which doesn’t affect the Browns, who have hosted camp in Berea since 1992.

He said the Browns will adjust to any other changes.

“Whatever the rules are, we will play by the rules,” he said. “We are like every other team. We are all in the same boat. The message has always been and will continue to be we just have to find a way.”

The installation of the offensive and defensive systems is just about complete and the review will start next week in the virtual meetings.

“You can’t just hit it once and it is done. We have to go back, review and build upon the foundation we have started to lay,” Stefanski said. “All the while, we have to come together as a team. The challenge has been to come together while many miles apart. It is a challenge but not something that we can’t do.

“We have tried a few different things. We have some unique people on this team, I will tell you. Anything to kind of get a laugh, keep this thing loose and start to come together. That is going to be a challenge when we do physically come together, as well. It is something I am thinking very seriously about. As important as the X’s and O’s are, we are working really hard on the team-building aspect, as well.”

Tight end David Njoku was frustrated for nearly the entire 2019 season. He broke his wrist and suffered a concussion Week 2 against the Jets, then butted heads with then-coach Freddie Kitchens when Njoku thought he was ready to return.

He played four games for the year, catching five passes for 41 yards and a touchdown. He was a healthy scratch two of the last three games.

“I gotta admit I appreciate what last year taught me,” Njoku tweeted this week. “A lot of adversity was added to the plate but I’m so thankful I went through it. Clean slate.. I’m ready.”