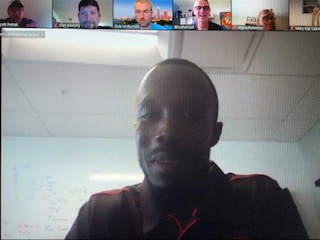 The basketball background as a walk-on, end-of-bench, try-hard player at Princeton.

The career as a commodities trader on Wall Street.

No matter where life has taken him — or he’s taken his life — new Browns vice president of football operations Kwesi Adofo-Mensah has been driven to find solutions in difficult circumstances.

“My whole life, and not just my professional life, I have been really passionate about decision-making under uncertainty,” he said Thursday on a Zoom conference call with area media. “What draws people to sports from an academic environment is that you get a chance to apply some of these academic principles and the things that happen kind of subconsciously on the court or on the field.

Adofo-Mensah was hired last month to serve as essentially assistant general manager to GM Andrew Berry. Adofo-Mensah spent the past seven years with the 49ers, the last two as director of football research and development, after making the jump from commodities trading.

The path was unusual, but he always had an eye on the NFL.

“I have been a football fan since I was 3. This has always been a dream of mine, to be honest,” Adofo-Mensah said from team headquarters in Berea. “You just do not know how to break in. When I was in graduate school, it was something I had my eyes on. I thought maybe I would be a professor and sort of consult, but I really did want to be a part of the team and actually work in the building.

“It was just whether or not I could break down the walls to get there.”

He met Berry at the scouting combine in 2019, breaking character to introduce himself in an elevator. After Berry returned to the Browns as GM in January following a year with the Eagles, he reshaped the personnel department and selected Adofo-Mensah as his top lieutenant.

“You talk to that guy for five minutes and you know where he is going to be in his life, but I did not know this was going to be the manifestation of our relationship,” Adofo-Mensah said. “I am honestly so humbled and honored that he believes enough in me and the organization believes enough in me for this position. I will do everything in my power to make sure I repay that.”

The hiring of Adofo-Mensah continues the legacy of owners Dee and Jimmy Haslam adding diversity to the front office in a league that continues to fall short in that area. Berry follows Ray Farmer and Sashi Brown as black general managers with the Browns, and Adofo-Mensah joins vice president of player personnel Glenn Cook in positions of power.

“As a minority, you kind of live in two worlds, where you live in this world where you know that your expectation is lower based on the color of your skin but you also live in this world where I have agency in what is going to happen in my life,” Adofo-Mensah said. “I am one of those people that is always focused on my agency and what I can do. Wherever I have been and the things I have accomplished, I have never really stopped to kind of smell the roses in a sense. But when I got hired for this job, I received a bunch of messages on LinkedIn. A lot of them were from awesome Cleveland fans welcoming me to Cleveland, but some of them were from black men who were just saying that it inspired them to see somebody like me in a position like this. That honestly was super meaningful to me and helped me kind of see that for what it was.

“I know that the NFL is trying, and I am going to be part of that effort to try and get my 2 cents of input. Ultimately, you just want to give everybody the opportunity to be great and have their merits be what carries them. That is all everybody has ever asked.”

He left the 49ers, who lost the Super Bowl in February, for a team that has never been to the Super Bowl and hasn’t been to the playoffs since 2002. He said one of his projects in San Francisco was a study of successful organizations in sports and business.

“Seeing that up close (with the 49ers), I just know that is what it takes to win and I will never back down from that. Also, just a sense of realism. It takes talent to win in this league. It takes great coaching. It takes great development. It takes a lot of great things.”

Adofo-Mensah describes himself as a continuous learner who asks for explanations about the simplest things to gain a fuller understanding. The approach was critical in adjusting to life in an NFL front office, including learning to scout players.

“When I sat in a room with great evaluators that I have been around in San Francisco, I just took everything they told me,” he said. “I tried to find the intuition behind it. I ask ‘why’ a lot. I wanted to know even the most simple question. You might think it is simple, but I am building the complex bridge that will get me somewhere complex.”

He pointed out that his role won’t be as one of the organization’s top talent evaluators.

“My job is going to be another person who knows enough about everybody’s point of view to come together and make a good decision,” he said.

“It is so funny, before I came into the NFL, I never heard that word and never used that word, and now that I am in the NFL, I still do not,” Adofo-Mensah said. “We are trying to make good decisions. These are uncertain things that we are trying to figure out so we try to be evidence-based. Look, coaches and scouts have been evidence-based in the NFL for a long time.

“We are trying to win on the margins and so we are trying to extricate every little winning advantage possible we can find across football operations and use the evidence to support that.”

His willingness to grind was established when he walked on to the Princeton basketball team after growing 8 inches as a freshman, then spent his career at the end of the bench.

“That will always shape who I am,” Adofo-Mensah said. “I live in these dual realities of the person with ability and intelligence that everybody says but also the person who has something to prove every day that he wakes up.”

With abundance of skill position players, coaches expect to change plan weekly to use them all, attack opponent
Donovan Peoples-Jones pairs character and intelligence with special mix of size and speed