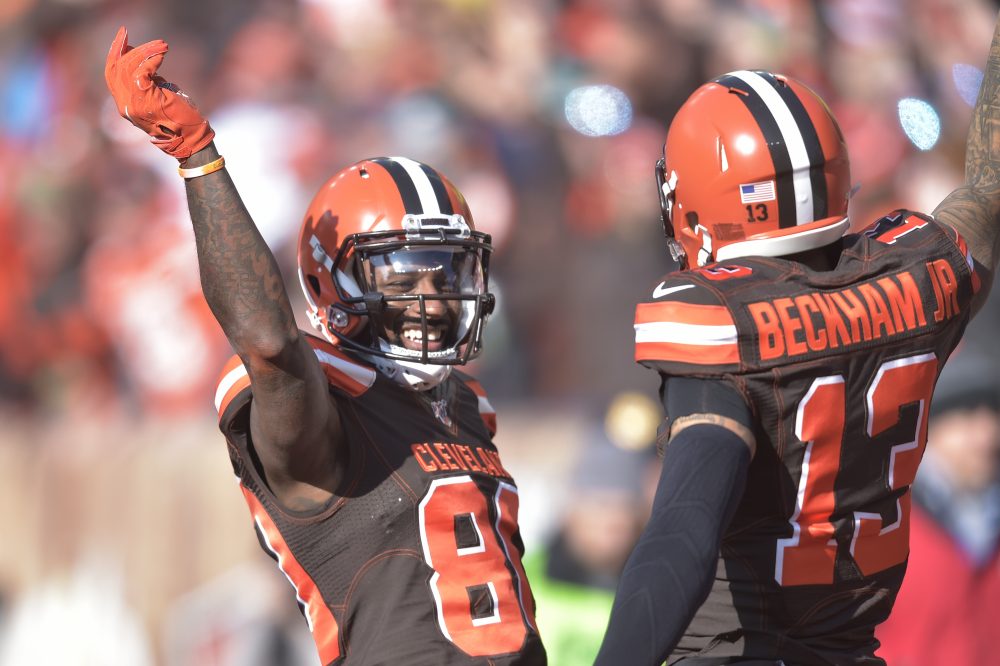 One of Chad O’Shea’s biggest takeaways from coaching receivers for a decade under Bill Belichick is the respect the New England Patriots give to the team concept.

“Regardless of their status, everyone understood and realized the importance of team and putting the team first,” O’Shea, who’s in his first year as pass game coordinator/receivers coach for the Browns, said Wednesday on a Zoom conference call with reporters.

Receivers Odell Beckham Jr. and Jarvis Landry have elevated status in the Browns locker room. They have Pro Bowl resumes and are among the faces of the NFL.

When asked about keeping them happy with catches and touchdowns considering the other offensive weapons — running backs Nick Chubb and Kareem Hunt, tight end Austin Hooper — and coach Kevin Stefanski’s commitment to the run, O’Shea was confident the receivers will make winning the No. 1 priority.

“We’re very fortunate offensively to have some players at each position that really have a lot of strengths,” said O’Shea, who was with the Patriots from 2009-18. “Obviously, Odell and Jarvis have strengths and what’s most important to me and I know most important to our team and Coach Stefanski is that in everything we do, in every decision we make, and those guys know this, is that we’re going to try to put the team first and we’re going to try to put winning first. I think that they realize that, they embrace that. And I think that they’re also aware that there’s other players at other positions that will help us win games, that are capable to really help us.

“Everybody’s role is kind of what you make it. I see it as a real good problem to have where you have a lot of opportunities, and a lot of players that can really help us win.”

Receivers have the reputation of being the prima donnas of an NFL roster. They want the ball, statistics and attention.

Beckham’s frustration was obvious in his first year with the Browns in 2019, as he dealt with a season-long core muscle injury, a drop in production (74 catches, 1,035 yards, four touchdowns) and losing. He reportedly told teams during the season to “come get me,” then let the drama build before announcing he wanted to stay.

Landry had a big season personally (83 catches, 1,174 yards, six TDs) but complained about the play calling and lack of an offensive plan, clashed with then-coach Freddie Kitchens and hated the unmet expectations of a 6-10 season.

Beckham had surgery in January to repair his core muscles, and Landry had more extensive hip surgery in February.

“They have really taken advantage of the opportunity,” said O’Shea, who was fired in December after one year as offensive coordinator with the Dolphins. “Our athletic training staff and our strength and conditioning staff has done a great job of putting a plan in place for them. They have made a lot of progress.”

O’Shea saw the impressive video of Beckham running routes and catching passes from Cam Newton in Los Angeles recently but wants to see Beckham on the field in Berea — for the first time as his coach — before estimating publicly how close Beckham is to 100 percent.

“He has done everything we have asked him to do as far as our expectations in all departments and certainly the end goal here is for him to be his very best when we play that first game,” O’Shea said. “And I am not going to speak of where I think he is right now just because it is hard for me to compare, obviously I am still learning about him and try to get to know him. So once we get on the field I think it will be very clear on where he is.”

“It truly has been something that has been a positive for us,” O’Shea said. “We have spent a lot of time together as a receiver group. Those guys, they have worked extremely hard. When we are in a room together, we are talking about the offense and we are learning together, and we are trying to put something in place that once we get on the field they are able to go out there and play confidently because of their knowledge.”

Hunt, who has shown his versatility with 116 catches in 35 NFL games, has interacted with the wideouts during the offseason program and could see time as the slot receiver.

“I have been very impressed with him as a receiver as a running back,” O’Shea said. “I know that it brings great value to that position when you can be a threat in the pass game, for sure.”

O’Shea worked with Stefanski from 2006-08 before heading to New England. Stefanski was just getting started in his career and stayed with the Vikings.

“I have a tremendous amount of respect for him,” O’Shea said. “Certainly, I am really excited about him being our leader. He has been somebody that in the past has just had tremendous character and has been a great communicator, and he is always at his very best when things are not quite right or the circumstances are difficult.”