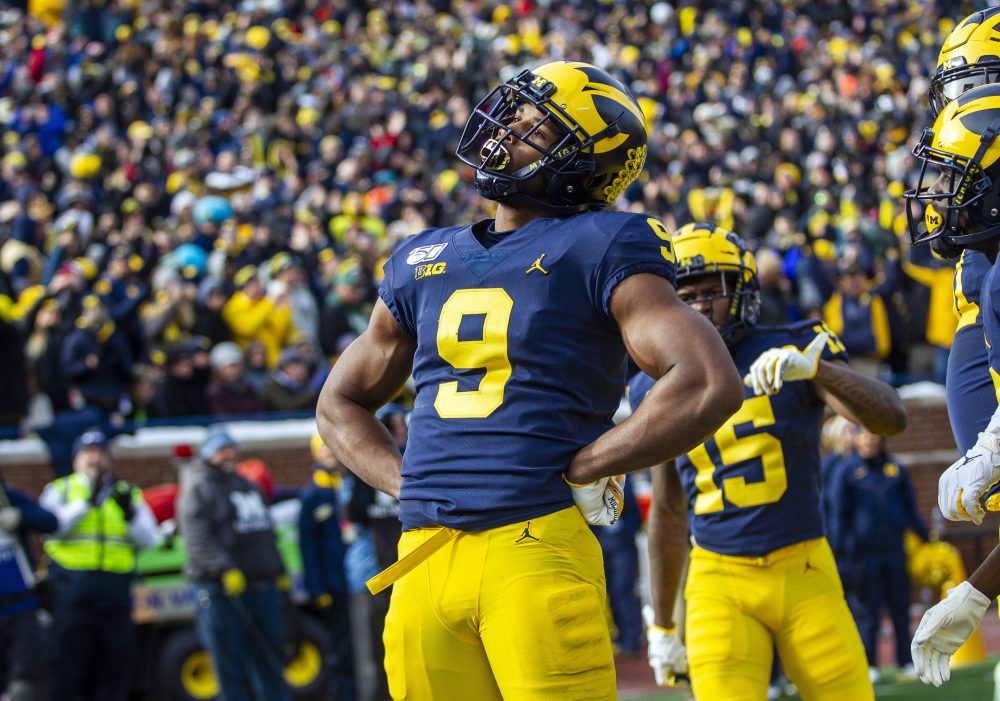 Thomas Wilcher didn’t need the draft in April. He knew Donovan Peoples-Jones would play in the NFL … when he was in the eighth grade.

“He had athletic scores that were exceeding some of the NFL times, jumps and all that,” Wilcher, Peoples-Jones’ coach at Cass Technical High School in Detroit, told The Chronicle-Telegram recently by phone. “He was athletic as heck early.”

Peoples-Jones’ size-speed combination remains special. The 6-foot-2, 212-pound receiver ran a 4.48-second 40-yard dash at the scouting combine in February with a vertical jump of 44½ inches. He was putting up similar numbers eight years earlier before entering Cass Tech, where he became the nation’s top-ranked receiving recruit and chose to stay close to home at the University of Michigan.

As intoxicating as Peoples-Jones’ talent is, the Browns had other reasons to select him in the sixth round.

“He has great character. He is highly intelligent,” pass game coordinator/receivers coach Chad O’Shea said this week on a Zoom call with reporters. “We had a chance to interview him at the combine and were very impressed with him as a person.”

The Browns obviously valued his skill set — “It jumped out at us as far as where he is physically and the potential that he has to grow even more,” O’Shea said — and believed he was capable of maximizing it. The virtual offseason program has confirmed that belief.

“He has come in, he has really worked hard and he has tried to do what we have asked,” O’Shea said.

The references the Browns received were sparkling. His coaches at Cass Tech and Michigan can’t say enough good things about Peoples-Jones.

“The best person you’ll ever want to meet,” Wilcher said. “I was just thinking about it today, I said, shoot, that kid could probably run for president.”

Wilcher didn’t think he was exaggerating.

“There’s only two kids I ever met that I said, hey, this could be a president,” he said.

The other is Daelin Hayes, a defensive lineman at Notre Dame.

Wilcher said Peoples-Jones was always exceptional — he’s talked about following his dad as an orthopedic surgeon — and hasn’t changed after what’s considered a disappointing career at Michigan. Wolverines offensive coordinator Josh Gattis agreed the Browns are getting a good one.

Andrew Berry spent his first offseason as general manager rounding out the talented roster left by predecessor John Dorsey. Part of Berry’s mission was improving the character, as he and new coach Kevin Stefanski continue to emphasize they want smart, tough and accountable players.

“For Donovan, the things that are exciting about him is, first and foremost, he’s a student of the game,” Gattis said. “He’s very smart when it comes to learning concepts, learning offenses. He’s not going to make many mistakes from that standpoint.”

As O’Shea stressed, that’s going to be more important than ever after an offseason program conducted strictly virtually. Practice time in training camp will be precious, and repetitions can’t be wasted not knowing what to do.

Peoples-Jones’ draft status — No. 187 overall and the 27th receiver chosen — after his recruiting ranking (No. 11 nationally and the top receiver, according to 247sports.com) suggests a three-year disappointment.

He was a freshman All-American punt returner in 2017 and third-team All-Big Ten as a sophomore after leading the team with 47 catches, for 612 yard and eight touchdowns. But the moments of brilliance weren’t as numerous as hoped.

He dealt with nagging injuries, especially as a junior. A groin injury sidelined him for the offseason, then he missed the start of his final season with a sprained ankle and finished with 34 catches for 438 yards and six touchdowns.

“What people saw was probably about a 75 percent Donovan Peoples-Jones,” Gattis said. “There were times later in the year where he got close to 100 percent, but when you miss the significant amount of time that he missed, it’s hard to really get into your prime late into the year.

“His upside is tremendous. Obviously there’s areas where he’s got to continue pushing himself and challenging himself, but he does have a ton of upside.”

Wilcher watched Peoples-Jones rush back from a broken wrist in high school and believes his determination to return last year shows his passion for the game.

Inconsistent quarterback play and turnover at coordinator and quarterback didn’t help Peoples-Jones in the quest to put up big numbers and move into the upper echelon of a draft class deep and talented at receiver. He also frustrated coaches by dropping easy passes after making difficult catches. But Wilcher said Peoples-Jones didn’t regret his decision to stay in state and didn’t crumble under the pressure of the hype from his recruitment.

The name recognition followed Peoples-Jones to Cleveland, but the suffocating pressure stayed up north. Odell Beckham Jr. and Jarvis Landry are entrenched as the starting receivers, allowing Peoples-Jones to develop slowly. He will compete for time as the No. 3 wideout and as a kick returner/special teamer.

“We’d all love to be the first overall pick, but when you’ve got an opportunity to go in and learn from a guy like Odell and Jarvis, that is so instrumental to the longevity of your career,” said Gattis, who played four games for the Bears in 2007. “So his ability to learn from those two guys, you’re going to see that pay off not just this year but years down the road for him. When you get an opportunity to go learn from guys that have played at a high level, learn the nuances, the details, what makes those guys successful, and you take what you learn and you apply it to your own craft, the sky’s the limit.”

Peoples-Jones worked out with Landry before the draft and has embraced the pupil role.

“Being around him the last two months, I see already he’s a hard worker. I see that he’s eager to learn.”

“I think that I can come in and soak up a lot of information from them and really take it all in,” Peoples-Jones said during the draft.

Peoples-Jones will compete with Rashard Higgins, Damion Ratley and KhaDarel Hodge for the snaps behind the starters. With Beckham’s ability to do just about everything and Landry’s expertise in the slot, Peoples-Jones could be the complementary deep threat.

FUEL TO THE FIRE

Peoples-Jones didn’t need extra motivation but got it from sliding in the draft, acknowledging the “long list” of wideouts picked before him.

“I am definitely going to remember that,” he said.

Peoples-Jones has something to prove after dropping in draft

The determination to make it with the Browns was obvious in the days after he was picked. He was back in Detroit training with Wilcher in the snow and rain.

With the talent, intelligence and mindset, Peoples-Jones has the tools to succeed at the highest level.

“It’s going to be a very good thing.”

The coach who recognized future greatness in an eighth-grader and watched him become MVP of the state championship as a senior in high school has no trouble picturing his pupil contributing alongside Beckham and Landry.

“They don’t call you DPJ for no reason at all,” Wilcher said. “They could be calling you Donovan Peoples-Jones. But you know well they call you DPJ, so don’t worry about that. You’re a brand.”