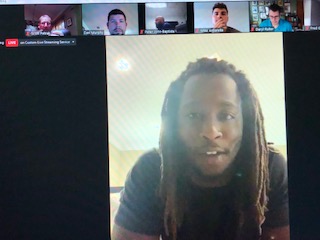 Kareem Hunt has a message for the rest of the stars in the Browns offensive huddle.

“We have to know there is only one football, so every game everyone will not have a big game,” he said Monday on a Zoom conference call with area reporters. “As long as we win, that is the only thing that matters and that is the biggest thing. We have to understand that.

“If we are winning, I am not mad. I am going to do whatever. If that is block to help win, whatever, touchdowns, block, whatever. But we all have to know there is only one football. Some games, Odell might have 200 yards. Some games, Nick might have 400 yards, or whatever, and Jarvis might have 10 or something like that. But we won, so that is the only thing that matters.”

Although it’s commonly referred to as a good problem to have, new coach Kevin Stefanski and coordinator Alex Van Pelt will be challenged trying to incorporate and keep happy the plethora of playmakers.

Odell Beckham Jr. and Jarvis Landry each topped 1,000 receiving yards last year despite playing with injuries that required offseason surgery and have combined for eight Pro Bowl appearances. Nick Chubb was second in the NFL in rushing last season with 1,494 yards, and Hunt led the league in rushing as a rookie with the Chiefs in 2017 with 1,327. Tight end Austin Hooper signed a four-year, $42 million contract as a free agent in March after back-to-back Pro Bowls with the Falcons.

Carving out a significant role for Hunt could prove the trickiest for the coaches. Chubb has established himself as the feature back and doesn’t have the off-field baggage of Hunt. But Stefanski and Van Pelt don’t want to neglect Hunt, who has the talent of a top-10 back in the league.

The key could be finding the right mix of opportunities as a runner and receiver.

“Whenever my number is called, I am going to be ready to go,” Hunt said. “It does not matter when, if it is the passing game or running the football. I am looking forward to that. However they want to use me, just let me know. We will see how that goes.

“Whatever, to get on the field or get the ball in my hands, I am not mad. I want opportunities.”

Pass game coordinator/receivers coach Chad O’Shea said last week Hunt was crossing over into the virtual receivers meetings, as he’s a candidate to work as the No. 3 wideout behind Beckham and Landry.

“It is going good, have been doing stuff with them, trying to learn the communication and be on the same page,” Hunt said. “We will see how that goes. But they are telling me I am going to run the football, too, so we will see.”

Hunt was suspended by the NFL for the first eight games last season after a pair of violent off-field incidents, including one in which he shoved and kicked a woman.

In eight games and three starts, he rushed 43 times for 179 yards, two touchdowns and a 4.2 average and caught 37 passes for 285 yards and a touchdown. He’s looking forward to being even better given a full season and a clean bill of health. He had core muscle surgery during last preseason.

“Body is feeling great. That was definitely something that slowed me down last year in training camp and coming back, because I was rehabbing through my whole situation,” he said. “Honestly, I feel like having a full season to train healthy and push myself and prepare myself for this upcoming season, I want to see how I feel fully healthy.”

He’s working out twice a day, running hills and training with his track coach as the Browns have been limited to a virtual offseason program by the coronavirus pandemic. Training camp is tentatively scheduled to open July 28.

“I am just going to keep working and whenever it is time to report back, I will be ready,” he said.

Hunt said he talks a lot with Chubb and they’re excited to get in Stefanski’s wide zone run scheme. He noted running back Dalvin Cook’s success last year in Minnesota (1,135 yards, 13 TDs, 4.5 average) with Stefanski as coordinator.

“We definitely feel like we can thrive,” Hunt said.