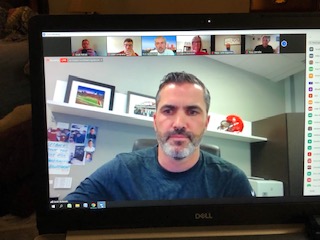 The uncertainty about playing the NFL season during the coronavirus pandemic hasn’t relented.

“I am comfortable being uncomfortable, so whatever comes our way, we will be ready,” Browns coach Kevin Stefanski said Thursday on a Zoom call with reporters. “I understand why that may be a concern for some, but we are just going to plan with what is in front of us.”

The virtual offseason program concluded Thursday, leaving training camp in Berea as the next step toward a season the league is determined to have. The NFL reiterated Thursday it expects camps to open on time, and it continues to talk to the NFL Players Association about safety guidelines for a return to team facilities and the practice field.

The Browns’ plan is for rookies, quarterbacks and injured players to report July 24 and veterans July 28. Stefanski’s prepared to make a new schedule if necessary.

“I am operating under that assumption,” Stefanski said. “I just think for us, all offseason long we’ve had a plan and then we’re ready to pivot.”

He could be forced to adjust to the trimming of the preseason from four games to two. The league and union seem headed toward calling an audible to allow the players more time to prepare for games following an all-virtual offseason program and to reduce unnecessary travel.

While players around the league have tested positive for the virus, including star Cowboys running back Ezekiel Elliott, Stefanski said he didn’t know of any Browns players or anyone within the organization who had.

He obviously wants to keep it that way during the break before camp and will discourage his players from training together. Running back Kareem Hunt revealed Monday that quarterback Baker Mayfield was planning a session for teammates, but the NFLPA doctor has advised against that to help keep players healthy until training camp.

“I’ll talk to those guys,” Stefanski said. “It’s their offseason, we can’t really direct them to do anything football-wise in this break. I’ll talk to them and just reiterate that I want those guys to stay safe.”

He said that’s been his message since the offseason program began in April.

“I’ve told them the No. 1 priority is their safety and their family,” Stefanski said. “Have reminded them ad nauseam to wash their hands and social distance and really heed the advice of these experts. So I’ll just continue to make sure these guys are knowing that they’re being encouraged to stay safe.”

Even if the players report on time, there are a variety of questions that must be answered. The rules for meetings and weight lifting will be much different, and potentially for practice, too. The start of on-field work could be delayed by testing for the virus, and the lack of a traditional offseason program could lead coaches to proceed with caution when practice begins.

“I wish I knew,” Stefanski said when asked about the logistics of camp. “That is one of my questions. I do not know. Again, that is OK. We have a plan. If that plan will not do, another one must. We will be ready.”

Ravens coach John Harbaugh said it will be “humanly impossible” to follow the safety guidelines in a nine-page memo from Commissioner Roger Goodell. The union has yet to approve working conditions.

“I know this, whatever the rules are, I am ready to abide by them and adhere to them,” Stefanski said. “I do not know what it is going to look like. I know what our rules are right now in our safe return to work and being in my office right now. Whatever the protocols are that the league agrees on and puts out, we will be ready to roll.”

Goodell’s memo prohibited in-person meetings of more than 20 people, which would be a significant change from coaches talking to the entire team or the offense and defense in one room. Stefanski’s deciding whether he’ll hold those sessions virtually or broadcast to the position meeting rooms.

He remains steadfast the Browns will be flexible and mentally tough in dealing with all challenges, and that they’re on level ground with the rest of the league despite having a new coaching staff and young roster. But he’s considering scaling back the offense given the restrictions of the offseason.

“We are going to wait to see what the framework of the practice schedule and meeting schedule looks like, but it is definitely something that is on our mind, making sure that we are covering all of the things we need to cover and then being very mindful about how we do that,” he said.