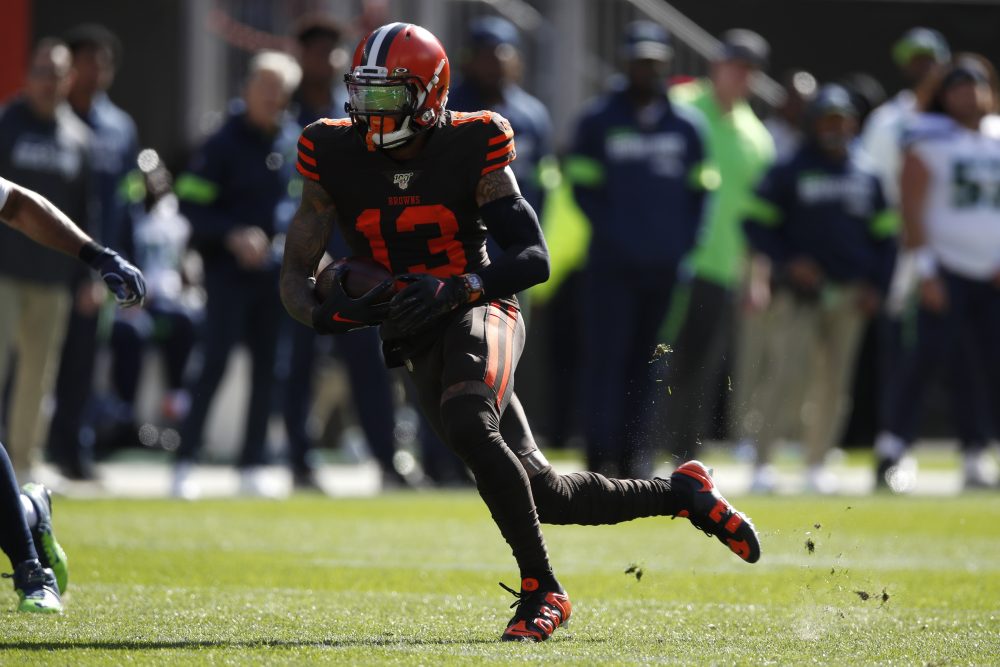 The recovery is complete. Receiver Odell Beckham Jr. is back to normal after core muscle surgery in January.

“Odell is free and clear,” coach Kevin Stefanski said Thursday on a Zoom call with reporters. “He is 100 percent. He is looking really good.”

Beckham played all 16 games last year — 74 catches for 1,035 yards and four touchdowns — but was never at full strength in his first season with the Browns and was extremely limited in practice. He said he originally felt discomfort in his groin area in June or July, then tore a little piece of his abdominal muscle in the third week of training camp in August. The surgery revealed a torn adductor and a torn rectus abdominis.

He’s participated in the team’s virtual offseason program and recently trained with free agent quarterback Cam Newton in Los Angeles. Beckham should be running routes and catching passes from Baker Mayfield on the first day of training camp, which is scheduled to open in late July.

Fellow receiver and best friend Jarvis Landry will likely need more time before hitting the practice field. He had a serious hip surgery in February.

“Jarvis, to his credit, he is looking great, some of the videos that I have seen of him moving around,” Stefanski said. “We will have a plan for them (Landry and Beckham). We will make sure that we wrap both of them up appropriately.”

Landry said recently he and Beckham have motivated each other during their rehabs. And after skipping the vast majority of last season’s voluntary in-person offseason program, Beckham has been praised for his participation this year.

“He’s all in. he’s bought in, he’s been there and it’s awesome,” offensive coordinator Alex Van Pelt said earlier this month. “It’s good to have him there. It’s good for him. He’s obviously learning the system.”

Stefanski didn’t provide an update on other injuries. Tight end Pharaoh Brown was in a walking boot during a video of him lifting weights he posted on social media.

Stefanski applauded general manager Andrew Berry for starting the “Be The Solution” campaign to fight racial injustice. The initiative began with an email to the organization and was expanded to the public Wednesday night.

“I thought it was outstanding. That is what leadership looks like,” Stefanski said. “Our organization and our ownership group has always taken diversity and social justice to heart. There are so many initiatives that they are involved with over the years. What Andrew is doing and what this organization is doing is leading from out in front. It is awesome.”

Berry has challenged everyone to do at least one of three things. Spend at least 8 minutes and 46 seconds (the length of time a white Minneapolis police officer kneeled on George Floyd’s neck as he died) on an educational or dialogue item and submit a written or video reflection. Sign up for a social activism initiative. Donate to a social activism cause.

The organizational donations had raised more than $185,000 for 14 charities through Monday.

Stefanski will start a social justice committee among the players when they convene for the season.

Mayfield’s offseason was what Stefanski wanted to see.

“I have been very impressed with the work that he is putting in,” Stefanski said. “He is all ears. He has taken everything and he is taking it all in.

“Alex Van Pelt and the coaching staff are really giving him a lot, and I do not see any limitations with Baker. He has done a really nice job. I talked to him actually this morning, and he is raring to go and hopefully we will get him back in here and with his teammates.

“It is harder obviously on Zoom in a virtual program to build these relationships, so that is certainly something when we get back in the building, it is going to be about understanding your teammates, getting to know your new teammates and start to build this team.”

With Beckham and Landry at receiver, Nick Chubb and Kareem Hunt at running back and Austin Hooper at tight end, the Browns have plenty of high-level options on offense. The coaches are formulating plans to get them all involved.

“I actually went over that with the offensive staff this morning, just talking about carries, touches and what that looks like,” Stefanski said. “It is definitely on our mind. Certainly you have to be mindful and intentional about how you want to go about that while understanding that each week calls for a different game plan.

“We are fortunate enough to have players at each of those levels that can affect the game, but it is definitely on our mind of how you divvy that pie up and how you design plays. That is definitely something we are talking about.”

Part of the virtual program included players recording their individual workouts and sending them to the coaching staff for review.

“They did a great job,” Stefanski said. “Just the message of seeing some of our guys lifting in their garage or seeing a player — I don’t know if this is safe — bench press and having two weight coolers on either side be his bench rack.

“It was pretty cool from a message standpoint of whatever it takes these guys are willing to do to put the work in. Credit to our players. A successful offseason.”

Stefanski hasn’t decided if he or Van Pelt will call the plays during the season. Stefanski has said he could wait until after the preseason to decide.

“I would like to get everybody back in the building, get out there practicing and get together before we make that decision,” he said.

** The coaches held exit meetings with the players this week to conclude the offseason program. The veterans’ meetings were Monday and Tuesday, giving them a head start on the rookies to the break before training camp.

Notes: Baker Mayfield writes letter to Oklahoma governor calling for clemency for Julius Jones
Notes: Myles Garrett wants NFL to stand beside, not behind, players in fight for racial justice