Myles Garrett, Browns close to extension that will make him highest-paid defender in NFL history 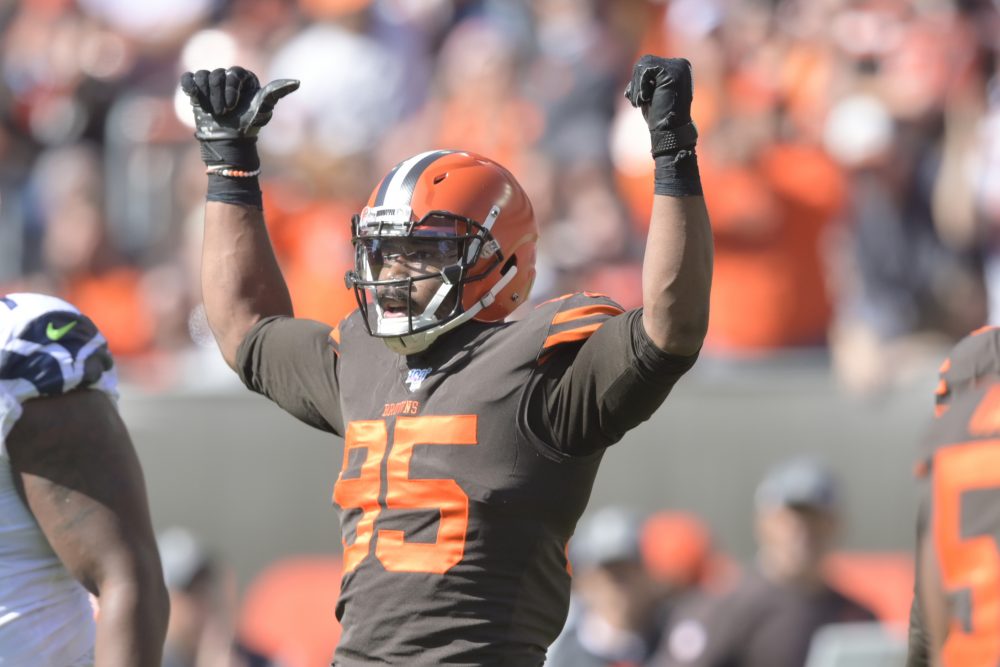 Myles Garrett is about to make the biggest takedown of his NFL career.

And become the highest-paid defender in NFL history.

The Browns and Garrett, the defensive end taken with the No. 1 pick of the 2017 draft, hadn’t finalized a contract but were close to making official a five-year, $125 million extension, a league source confirmed to The Chronicle-Telegram on Tuesday.

NFL Network was first to report the impending deal that will include $100 million in guarantees.

The Browns have been discussing a deal to keep Garrett for at least a couple of months. It will be the latest significant move by first-time general manager Andrew Berry.

The extension, which will run through 2026, proves without a doubt the Browns’ confidence in Garrett’s ability to rebound after being suspended for the final six games of the 2019 season for ripping off the helmet of Steelers quarterback Mason Rudolph and hitting him over the head with hit. He was reinstated by the NFL in February.

“I’ve had a good conversation with Myles and know that he’s very determined to put 2019 behind him and move forward to 2020 and we’re excited to see what he’s going to do this upcoming season,” Berry said at the scouting combine in February.

Garrett’s average of $25 million a year will surpass the $23.5 million of Bears pass rusher Khalil Mack and the $22.5 million of Rams defensive tackle Aaron Donald as the richest for a defender in NFL history. They signed their deals before the 2018 season.

Mack signed a six-year, $141 million contract with $90 million guaranteed. He was NFL Defensive Player of the Year in 2016, is a three-time All-Pro and five-time Pro Bowler.

Donald signed a six-year, $135 million deal with nearly $87 million guaranteed. He was Defensive Player of the Year in 2017 and ’18, is a five-time All-Pro and six-time Pro Bowler.

Garrett doesn’t have the resume to match either — his lone Pro Bowl appearance came after the 2018 season, when he had 13.5 sacks — but is driven to become the league’s best. He has freakish athletic ability and immense talent. He’s imposing at 6-foot-4, 262 pounds with a special combination of speed, quickness and strength.

Garrett didn’t immediately say anything thing about the extension on social media but posted videos of him working out.

“I think Myles has the right mindset in terms of wanting to be MVP and all of that, but we just need him to be the best player for us that he can be, and whatever happens, happens,” new defensive coordinator Joe Woods said in May. “Right now, I think he is in a good place. I think as a young player in this league, you go through a lot of different things so I definitely think he is going to learn and grow from the situation that happened last year. We really have not talked about it after he got back and after he was reinstated.

“He is focused on getting better. He is focused on being a good teammate. He has been in the meetings. He is trying to step up and take more of a leadership role. I definitely think he is moving in the right direction and has the right mindset.”

Finalizing a megadeal during the coronavirus pandemic comes with challenges — the 2020 season isn’t guaranteed to be played in its entirety and revenues will be down due to limited or no fans in stadiums — but the Browns were determined to secure Garrett for the long term. He was under contract through 2021 after the Browns exercised the fifth-year option on his rookie contract. He’ll make $4.6 million in 2020 and $15.18 million next season.

“All of that goes into play when we are talking about any of these moves that we are looking to make, whether it is extensions, signing free agents, possibly trades,” vice president of player personnel Glenn Cook said recently regarding the pandemic. “It does somewhat change what our overall plan is. You do think about that with all the moves we make and all the decisions that may come into play now and into the season.”

Berry has been decisive and aggressive since taking over for departed GM John Dorsey in January. He signed several free agents, including right tackle Jack Conklin and tight end Austin Hooper, drafted Jedrick Wills with the No. 10 pick and restructured the contract of defensive end Olivier Vernon, who will start opposite Garrett.