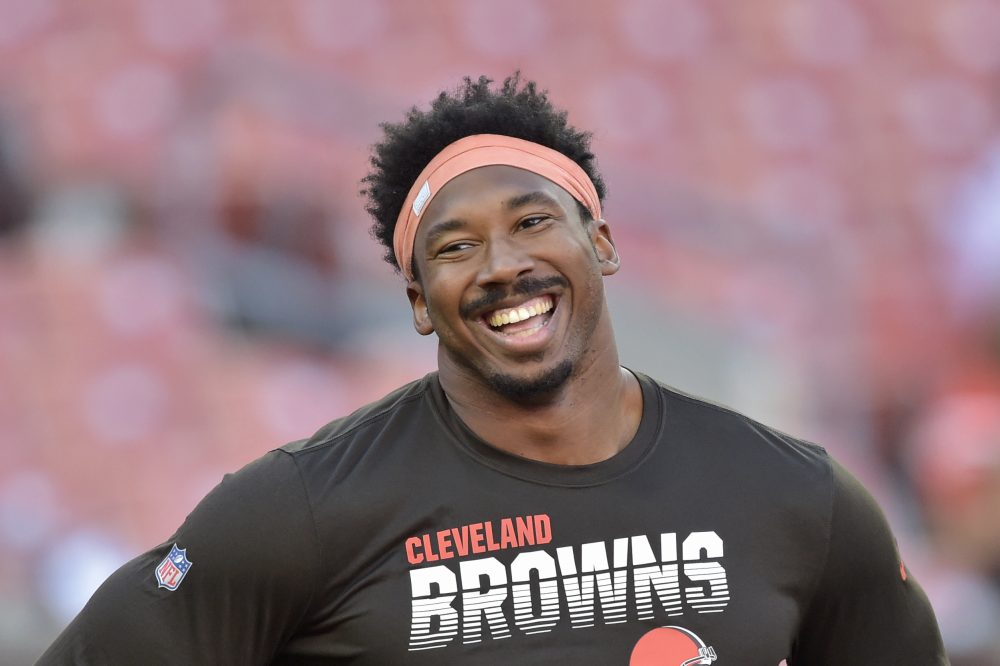 The Browns made a big-time commitment to defensive end Myles Garrett.

He plans to repay them in a huge way.

“In 2017, the Cleveland Browns bet on me,” Garrett said Wednesday in a news release after signing a five-year, $125 million extension. “This city quickly became my home and these people quickly became my family. I’m eternally grateful for this opportunity, the support of my friends and family, the organization, my teammates, the fans — I could go on forever, but even that wouldn’t be enough time to express my gratitude.

“I’ll just say this: Keep betting on me, Cleveland, because I won’t let you down. Now, let’s get to work.”

The Browns drafted Garrett with the No. 1 pick in 2017 out of Texas A&M and wanted to make sure he remained a key piece of the long-term plan.

“One of our fundamental organizational beliefs is identifying young players on our roster and proactively retaining them as part of our present and future core,” first-time general manager Andrew Berry said. “We go through great lengths to select players whose make-up and performance embody the characteristics we are looking for within our team. Today, we’re delighted that Myles Garrett will be a Cleveland Brown for many years to come.

“Myles’ rare physical gifts in conjunction with his work ethic, intellect and humility have been the catalysts behind an auspicious start to his young career. Despite his early individual successes, Myles maintains the same drive toward greatness that he displayed as a 22-year old rookie. We firmly believe that this intense focus means the best is yet to come.”

Garrett posted a picture of him signing the extension that runs through 2026. He added a video with him writing on a piece of paper “Cleveland keep betting on me, World keep betting against us.”

The organization’s decision to extend Garrett comes after he was suspended for the final six games of last season after he ripped off the helmet of Steelers quarterback Mason Rudolph and hit him on top of the head with it. Garrett had 10 sacks in the 10 games he played.

“Myles has been accountable for his mistake and we view the incident as well out of character,” Berry said. “We don’t believe one moment should define him based on how he has handled himself prior to and in the months after last year’s incident. We are excited to ensure that Myles will stay in Cleveland for the foreseeable future.”

Garrett has 30.5 sacks, 65 quarterback hits and six forced fumbles in 37 career games. His lone Pro Bowl appearance came in 2018 after 13.5 sacks, and he’s the only player in Browns history with multiple seasons of double-digit sacks.

He’s imposing at 6-foot-4, 262 pounds with a special combination of speed, quickness and strength.

“I think it’s really important for us as an organization to cement Myles’ status here for a really long time,” new coach Kevin Stefanski said. “He was drafted No. 1 overall, and you’ve seen over the years what an extremely bright future this young player has. I think it was a prudent decision on Andrew’s part and Myles’ part to keep Myles here for many productive seasons.

“Myles’ skill set, I think, is still scratching the surface. He’s young, and I can’t wait to get our hands on him and put him in this scheme and let him loose. He’s as disruptive as they come. He’s big, long, fast, quick and has a motor. He checks all the boxes. I think he fits so perfectly into what we want to be schematically in terms of getting off the football and being in attack mode for 60 minutes.”

Garrett has made himself a part of the community, taking an active role in charity work. In March he teamed with the Cleveland Hope Exchange to donate 24,000 pounds of food and additional resources to those in need in Cleveland’s Clark-Fulton neighborhood. He also is player captain of Waterboys, which works to bring clean water to communities in East Africa.

“Tell em to back up the BRINKS Truck!” defensive tackle Larry Ogunjobi commented on Instagram. “Congrats my boy!! Couldn’t be happier for you.”

Rookie safety Grant Delpit signs deal; all 7 draft picks under contract
Myles Garrett says his life’s “much bigger than one moment,” plans to assert himself as “top dog” in NFL