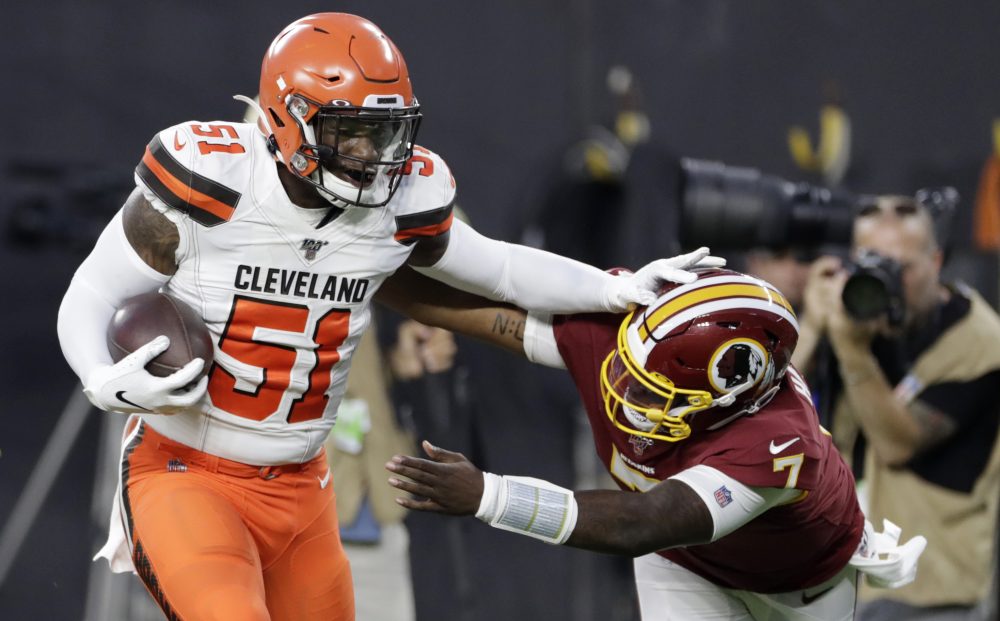 Position battles are a tradition of training camp. Starting jobs and roster spots up for grabs in late July are won by Labor Day.

The custom will continue this season but without the benefit of a preseason. The four-game exhibition season has been canceled as a concession to the coronavirus pandemic that rages on across the country, leaving meetings, walkthroughs and practice as the determining factors in the key battles.

Practice for the Browns won’t start until Aug. 12 and players won’t wear pads until Aug. 17, but the evaluation by coaches is underway.

The rookies and quarterbacks were allowed into team headquarters Tuesday if they tested negative for COVID-19 three times in four days. They went through physicals and equipment testing. The veterans reported for the first of many COVID-19 tests, followed by remote meetings.

Here are the top position battles to watch in what will be a unique camp that could make the decisions more difficult.

No position is as unsettled as linebacker, which looks like the weakest group on the roster.

Mack Wilson, a fifth-round pick last year, is expected to start but isn’t guaranteed a spot under a new coaching staff that includes coordinator Joe Woods. Wilson showed promise last year while starting 14 games after Christian Kirksey got hurt and has promised big things on a busy Instagram account. Wilson played on the weak side last year but could be moved.

Goodson has the most experience and could fill the middle spot vacated when Joe Schobert left in free agency but hasn’t played much in passing situations in his career. With nickel and dime packages used more than the base defense, Woods and coach Kevin Stefanski will not only have to pick their top three linebackers but decide which two are best against the pass.

General manager Andrew Berry’s top priority in his first offseason in charge was rebuilding an offensive line that had quarterback Baker Mayfield looking to escape the pocket last year whether the pressure was real or imagined.

Berry signed right tackle Jack Conklin to a three-year, $42 million deal in free agency then drafted Alabama’s Jedrick Wills at No. 10 to play left tackle. With Joel Bitonio and JC Tretter established at left guard and center, right guard is the only uncertainty on a unit that has the potential to go from liability to strength.

Wyatt Teller started the last nine games at right guard last year after replacing Eric Kush. Teller was a fifth-round pick of the Bills in 2018 and acquired in a preseason trade a year ago. He’s the early favorite to keep the starting job but will compete with Drew Forbes, Colby Gossett, Willie Wright and rookie fifth-rounder Nick Harris.

Chris Hubbard, who started 29 games at right tackle the last two years, could be added to the mix. He took a pay cut to stay and said he’s willing to move inside.

Depth on the defensive line is necessary, as coaches have taken to rotating units like hockey lines. But it still matters who starts and who plays on critical downs and in crunch time, so the coaches will have decisions to make regarding the depth chart.

Sheldon Richardson and Larry Ogunjobi, last year’s starters, return at tackle but will be challenged by free agent pickup Andrew Billings, formerly of the Bengals, and third-round rookie Jordan Elliott.

Richardson, Defensive Rookie of the Year in 2013 and a Pro Bowler the next year, showed versatility and leadership while stepping up last season when end Myles Garrett was suspended for the final six games and end Olivier Vernon was sidelined with a knee injury. Richardson must show the new staff just how valuable he is.

Ogunjobi is in the final year of his rookie contract and could be in line for an extension but first needs to keep his starting spot. Billings started 30 games over the last two years with Cincinnati and will push the incumbents.

LOOKING FOR A JOLT

The roster has come a long way under former general manager John Dorsey and Berry. Most of the starting spots are set and the depth improves with every signing and draft pick.

A couple of moves by Berry have the potential to bolster the return game, which was nonexistent a year ago. Free agent JoJo Natson, who went to the University of Akron, and sixth-round rookie Donovan Peoples-Jones are exciting additions to the competition that will include running back Dontrell Hilliard and cornerback Tavierre Thomas.

Natson (5-foot-7, 153 pounds) has returned kicks and punts for three years in the NFL but isn’t much of a receiver or an asset in kick coverage. Peoples-Jones (6-2, 212) has the versatility to compete for the No. 3 receiver spot and fill a role across special teams. But the rookie could be hurt by no preseason.

Assuming no one opts out of the season due to coronavirus concerns, the starters are set at receiver (Odell Beckham Jr. and Jarvis Landry) and tight end (Austin Hooper). The competition for key backup roles is where things get interesting.

Rashard Higgins re-signed on a one-year deal for the veteran minimum of $910,000 and is the early favorite to be the No. 3 wideout. But he’s coming off a disastrous season — four catches for 55 yards and a touchdown in 10 games — and will be pushed by Damion Ratley, KhaDarel Hodge, D.J. Montgomery and Peoples-Jones. And running back Kareem Hunt could spend more time as the slot receiver than all of them.

The third receiver is like a starter on most teams, but Stefanski prefers using two tight ends. David Njoku is the natural pick to join Hooper in those packages, but Njoku requested a trade so his future with the team is uncertain.

Pharaoh Brown, rookie fourth-rounder Harrison Bryant and Stephen Carlson are the other options. Brown is the best blocker of the group, which could be rotated in a pairing with Hooper.

Training Camp Preview: 6 things to watch — starting with a pivotal season for Baker Mayfield
Looking forward to watching these 5 things as practice opens