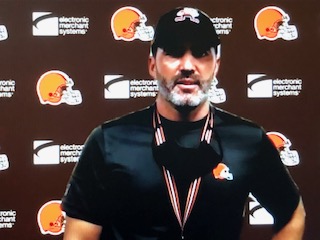 Coach Kevin Stefanski looked out his office window Thursday in Berea and, for the first time since taking the job in January, saw players on the field below. Browns rookies and quarterbacks were heading out for the first strength and conditioning session of the year after a virtual offseason program.

Stefanski would join them later for a walkthrough. The players wouldn’t huddle and everyone would be in masks.

Such is life during the pandemic. Stefanski’s excitement for the first signs of training camp was balanced by the organization’s cautious approach to life with the coronavirus.

“Really excited to be getting started here,” Stefanski said on a Zoom call with reporters. “I can’t tell you what a great feeling it is to look out my window and there is a practice field with football players on it. It has been a long time coming.

“Those fields look really, really good, and they are meant to have players on them.” 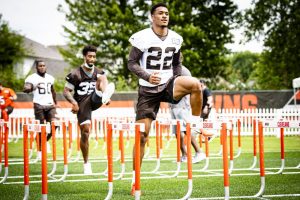 Stefanski still hasn’t met all of his players and has trouble recognizing all the rookies in masks but he has talked to them at length about making good decisions when they leave Browns headquarters. That’s an annual sentiment from coaches, but this year the emphasis is on not bringing the coronavirus back to teammates and coaches.

“It is a shared responsibility. It is something that it is not just one person’s responsibility to stay on top of,” he said. “We are really going to be counting on our veterans to show some good leadership here.

“I know there is a work-life balance for our players. I completely understand that, but this is such a unique time, and they have to take care of their teammates. We talk so much about being a good teammate, and one of the ways you can be a good teammate is when you leave this bubble and go into your own bubble, just making sure that you are making really sound decisions.”

Only the quarterbacks, rookies and some injured players were in the building and at the 60-minute walkthrough, but it was going to be the first time Stefanski got to see quarterback Baker Mayfield up close — not within 6 feet — on the field.

Veterans will be tested again Friday for the virus, and if they test negative for the third time, they will have physicals Saturday and Sunday and hit the field Monday for strength and conditioning and walkthroughs.

Stefanski followed the team’s medical personnel and stressed the importance of preventing a possible spread of the virus in the first two weeks after players have assembled from across the country. The Browns will split the roster into two groups for walkthroughs and they won’t huddle until full-team practices, which are allowed to begin Aug. 12.

Stefanski, alone in a broadcast room coaches can use to lead large virtual meetings, said the organization is approaching everything with an “abundance of caution.” Players won’t attend in-person meetings until Aug. 9, and when they do, everyone will be spread out more than 6 feet apart.

He expects practice to look “very similar” to normal once padded practices begin Aug. 17, but until then “we do not want to be doing too much too soon.”

The list of differences from a typical year is longer than a 90-man roster.

No coaches opted out of the season, but two players have (young offensive linemen Drew Forbes and Drake Dorbeck) and Stefanski wasn’t sure if more would. He said everyone else reported for testing. Punter Jamie Gillan became the third Browns player placed on the reserve/COVID-19 list and must stay away.

The Browns have contingencies for opt-outs and positive tests, including from Stefanski, who wouldn’t say who would replace him.

“But I will tell you it doesn’t just go down one. It goes down multiple,” he said. “The worst thing you can do is not have a plan in a year like this. We really made sure we had those conversations in the last few weeks.”

Coaches around the league have discussed isolating a backup quarterback in case of emergency, but Stefanski didn’t think that would be necessary.

“We are going to put a plan in place that we feel really confident in keeping all of our players safe,” he said.

As if a first-time coach and his staff won’t have enough challenges installing new offensive and defensive systems, the NFL will go without a preseason. The Browns will have six weeks from the day veterans take the field until they play in Baltimore on Sept. 13.

“It is definitely unique,” Stefanski said. “It is our job to create as many moments in training camp and as many times we can in practice to mimic gamelike settings and put the players in some situational football so that we do not lose those four games.

“We have to make every day count. We will be efficient. I think we have a really strong plan in terms of how we are going to ramp it up.”

Stefanski called the work done to reconfigure the facility and make it safe for the players and coaches a “miracle.” But when the players and staff leave the “bubble” of Berea, they’ll spend time with family, who must be included in the conversation.

“That is not easy for a lot of families, mine included, but you just have to do it. It is the sacrifice that we are making to make sure that we are keeping everyone else safe.”

Making safe choices could also benefit the win column, as the teams with rosters least affected by the virus should have an advantage throughout the season.

“It remains to be seen. It might,” Stefanski said. “It is hard to win in this league, and we are going to do everything in our power to not make it harder. If we take care of business in the building and outside of the building, seemingly that should give you an advantage.”