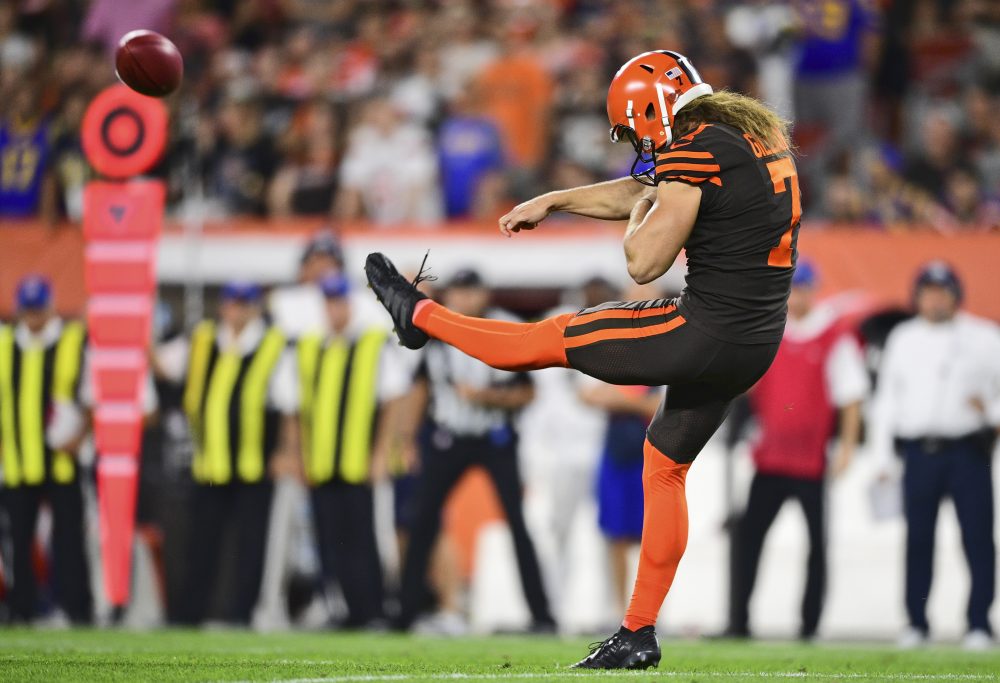 Punter Jamie Gillan tested positive for the coronavirus earlier this month, so he was stunned to test positive again Wednesday.

The result sent him to the reserve/COVID-19 list Thursday. He’s the third Browns player on the list, joining backup running back Dontrell Hilliard and undrafted rookie safety Jovante Moffatt.

Gillan is the most important of the group, and the Browns don’t have another punter on the roster, although kicker Austin Seibert has experience punting.

The new reserve list category is for players who test positive for COVID-19 or who have been quarantined after being in close contact with an infected person or persons. The team isn’t permitted to disclose why the player is on the list.

Gillan did in an interview with NFL Media.

“I thought I was just tired (after July 4 weekend),” said Gillan, who’s known as “The Scottish Hammer.” “I went and punted and kicked. I had two days of symptoms where I was achy and had a fever. The third day I had no fever or symptoms. I found out July 9 had it.

“I did approximately two weeks of quarantine from the 9th and then went back to living normally. I tested positive for antibodies (Tuesday). Then yesterday, somehow, I tested positive. I feel great as it’s been almost a month since I initially tested positive. Remember, we’re all in this together. Wear a mask.”

Gillan, an undrafted rookie last season, played in all 16 games and set a Browns record with a 41.6-yard net average. He finished tied for fifth in team history with 28 punts inside the 20.

Team physician Dr. James Voos said there’s no definitive timeline for when a player who tests positive can return.

“There is the follow-up testing to assure that follow-up testing is negative,” he said Wednesday. “Then there is being free of symptoms, further cardiac evaluation and then ultimately, it is that communication and comfort level of the player to return prior to getting back out on the field.”

“It is something obviously I do have a feel for,” he said. “We really can’t comment on individuals in this regard. The only thing we will do is follow every protocol to a T.”

The Browns are counting on rookie No. 10 pick Jedrick Wills to protect quarterback Baker Mayfield’s blindside Week 1 in Baltimore — even without preseason games to prepare.

Wills is making the switch to left tackle after spending his high school and college careers at right tackle and is expected to start from Day 1.

“No, the plan hasn’t changed,” Stefanski said. “We are keenly aware that we have a young player over there at left tackle. Trust me, his development is something that we will be very much on top of. We just have to work.

“Every one of these periods and every one of these lifting sessions, you have to make them all count. It is a shorter runway, but I think we can really get to where we need to get to, just like we would in a normal training camp.”

Stefanski hasn’t talked to tight end David Njoku since he requested a trade early this month but still has big plans for him.

Stefanski plans to play multiple tight ends at the same time, and Njoku, the No. 29 pick in 2017, is in line to be the No. 2 behind Austin Hooper.

Second-year lineman Drew Forbes opted out of the season because of the pandemic, removing a competitor for the starting right guard job.

“Drew made a decision. I respect his decision,” Stefanski said. “It is the next man up mentality. We will see how it all shakes out.”

Stefanski planned to decide if he or coordinator Alex Van Pelt would call plays during the season after giving Van Pelt a shot in the preseason. With the preseason canceled, it sounded like Stefanski has made up his mind.

“I will announce that when the time is appropriate,” he said.

He called plays last year as coordinator for the Vikings.

** Receiver Jarvis Landry, who had hip surgery in February, remains on schedule to return to the field in August and the team will know more after his physical this weekend, Stefanski said.

Notes: Myles Garrett wants NFL to stand beside, not behind, players in fight for racial justice
Notes: DT Andrew Billings opts out of season, hurting depth of D-line