Mailbag: What changed for David Njoku? What was impact of #WeWantToPlay campaign? Are any good linebackers available? 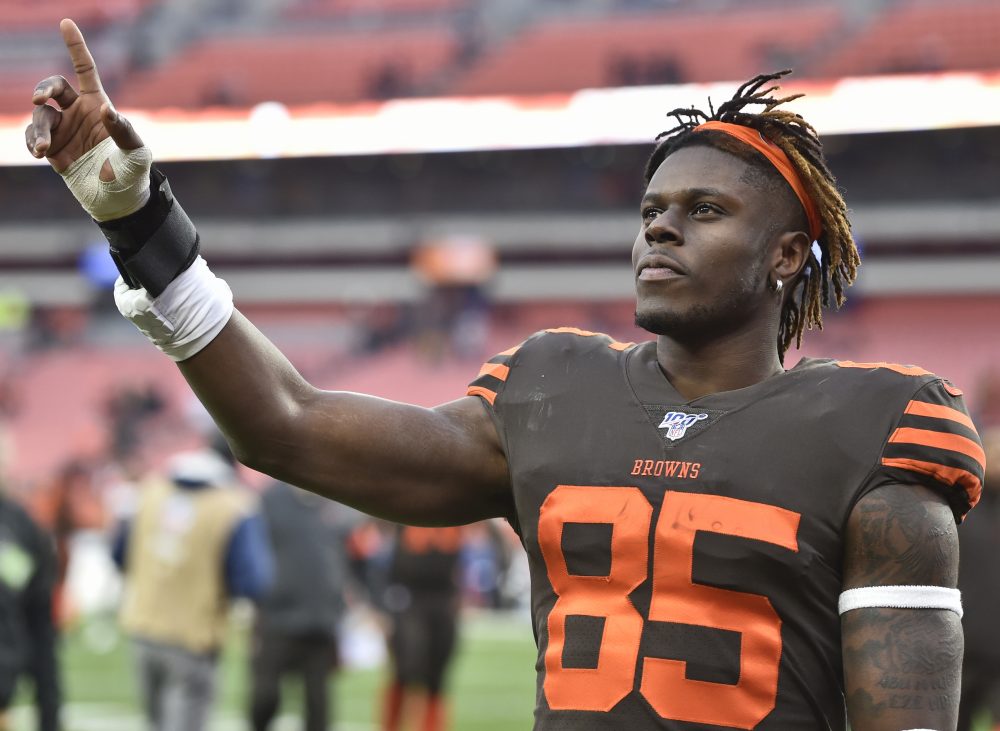 Q: What do you attribute David Njoku’s change of heart to?

A: I suspect it was a combination of the following: The trade market for him never developed, general manager Andrew Berry reiterated the organization’s belief Njoku can play a big role in coach Kevin Stefanski’s tight end-reliant system and Njoku realized he’d have a chance to succeed if he stayed. All of this became clear to Njoku after he reported for training camp.

Njoku’s trade request early last month never made sense. Although he was the No. 29 pick in 2017 and has special physical gifts, the production hasn’t followed. So the market for him was never going to be strong. The Browns knew this and didn’t want to give up on Njoku without a quality return. Meanwhile, Njoku had no leverage. He’s under contract through 2021, and the new collective bargaining agreement has stiff financial penalties for holdouts.

The Browns see Njoku as the best option this season for the No. 2 tight end behind Austin Hooper. That could change if Njoku struggles in training camp, or one of the other candidates — fourth-round rookie Harrison Bryant, Pharaoh Brown, Stephen Carlson — comes on strong. But for now, Njoku isn’t going anywhere, and he’s come to grips with that.

“I’m all in Cleveland,” he tweeted Saturday.

Q:
How crucial was NFL players’ #WeWantToPlay campaign to avoiding a stalemate with owners on player safety? The coordination & scale of player support seemed to wake owners up.

I think the owners always underestimate the power and cohesion of the players until shown differently. In this negotiation, it took the social media campaign to convince the owners and the league that the players were serious.

Browns center and NFL Players Association president JC Tretter emphatically made this point in a column he wrote last week.

“The negotiations of the past several months demonstrate what a strong, cohesive union can accomplish,” he wrote. “Each win stemmed directly from our ability to stand together and not back down from our demands, earning us protections on health and safety, contracts and macro-economic issues. …

“Our players came out in force to show the NFL that these protections were not requests; they were prerequisites for playing football in 2020. More than 400 players participated in the #WeWantToPlay Twitter storm that resulted in immediate concessions of no preseason games and daily testing.”

The players got their two biggest safety demands, which probably wouldn’t have happened if the league continued to question their unity.

Q: Allow streaming? But why not allow just 1 Browns sports media person ‘of the day’ for on-field drills? The stands are totally empty.

A: You’re referring to the daily coverage of training camp, specifically the team’s plan to live stream each practice starting Aug. 14.

First of all, that’s a great idea given that the fans that usually flock to Berea will be forced to stay home. But don’t worry about the media being excluded.

The plan is for approximately 30 media members to be permitted to watch outdoor practices while wearing masks and maintaining social distance. The experience won’t be entirely the same — movement among the practice fields will be limited — but my colleagues and I will be onsite and reporting as always. That will include tweeting player attendance, injury updates and big plays as they happen.

Q: What are the COVID-19 protocols for NFL officials?

A: They’re still a work in progress, but there’s no doubt we’ll see differences from the past.

The biggest change could be a smaller crew. The league doesn’t have a surplus of officials and could be forced to work with five-man crews instead of the normal seven if the roster of officials is further depleted by the virus. Fewer bodies would likely mean fewer calls and more misses by the officials.

I’d also expect to see officials in masks and gloves, and there has been a lot of discussion about using electronic whistles to eliminate the flying spit from a normal toot of the whistle. I think the officials and players would be more comfortable with these changes.

Q: Give me some viable/realistic linebacker options we can go after.

A: I completely understand the anxiety over the team’s current corps of linebackers but have never gotten the impression GM Andrew Berry or the coaching staff feels the need for an upgrade. They seem content to enter the season with the unproven group of Mack Wilson, B.J. Goodson, Sione Takitaki and Jacob Phillips.

But Berry must be prepared to look elsewhere if the youngsters don’t look ready in training camp. If that happens, I must warn you that the free agent market isn’t enticing.

Alec Ogletree, Darron Lee, Jake Ryan and Clay Matthews are the best available, but each has issues. Ogletree flopped with the Giants after signing a big deal, Lee never lived up to his first-round draft status, Ryan — a fellow St. Ignatius grad — has battled injuries and Matthews is 34 years old and could be limited to a pass-rushing role.

The better option might be a trade, which likely wouldn’t happen until teams get ready to make cuts by Sept. 5. The Browns should definitely identify teams with an extra linebacker, because there’s a good chance they’ll need one.

Q: Is it still possible for the Scottish Hammer to be activated before the season starts?

A: He already has been.

That’s what I get for waiting to answer your questions.

Punter Jamie “The Scottish Hammer” Gillan was removed from the reserve/COVID-19 list Monday.

NFL.com reported the NFL informed teams Sunday that anyone with a prior, documented positive test since April 1 will be allowed into team facilities even without consecutive negative tests last week. Gillan told NFL.com he tested positive earlier in July before being surprised to test positive Saturday after a test Friday that revealed coronavirus antibodies. He said he feels “great.”

Mailbag: Has Baker Mayfield really matured? Will new regime value veteran leadership? Will David Njoku be traded before deadline?
Mailbag: Why aren’t the Haslams using all the salary cap space? Can players opt back in? Is it time to worry about guard?