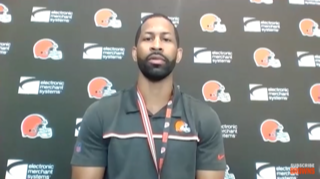 Andrew Berry’s job as a first-time general manager was always going to be difficult. It got exponentially tougher when the coronavirus pandemic hit just weeks after he was hired in January.

Berry navigated free agency, the draft and the rest of the offseason virtually. With the players back at team headquarters and on the field — at least for strength and conditioning and walkthroughs — the challenges continue.

The safety of players, coaches and staff is at the top of the list of priorities, and Berry is charged with setting the proper tone for the organization. He also must deal with evaluating and finalizing a roster in unprecedented circumstances. Three Browns players have opted out of the season, including defensive tackle Andrew Billings on Tuesday, five have made at least a stop on the reserve/COVID-19 list and the preseason has been eliminated, depriving him of the chance to see his players in a game setting and other teams’ players at all.

Berry is undeterred and optimistic the season will be played.

“I think that between the league, the (NFL)PA and then really what we have done here, we are doing everything we can to give ourselves the best chance possible to have a very successful season and, most importantly, keep players, coaches support staff and their families safe,” he said Tuesday on a Zoom call with reporters.

Receiver Odell Beckham Jr. had to be convinced of that. In a pair of settings last month, including a Wall Street Journal interview released Monday, Beckham questioned whether the NFL should play as the pandemic continues to rage across the country.

“In terms of Odell, he’s returned and really been focused on working hard,” Berry said. “He’s been very engaged in everything that we’ve done in the classroom and he’s really focused on having a great year.”

The deadline for players to opt out is Thursday at 4 p.m., but the Browns expect Beckham to stay and play after he reported on time and been an active participant. He wasn’t convinced during the Wall Street Journal interview done before the NFL and NFL Players Association agreed on safety guidelines and protocols for a return to team facilities.

“Obviously with everything that’s going on, it doesn’t make sense why we’re trying to do this,” Beckham said. “I just feel like the season shouldn’t happen and I’m prepared for it to not happen and I wouldn’t mind not having it.”

Berry noted Beckham’s superstar status brings a lot of attention and he’s aware he needs to be “conscientious” when he talks.

“With that being said, we’ve had plenty of dialogue and conversation with Odell, not only just through the summer but certainly as he’s returned to Cleveland,” Berry said. “And that’s been a positive thing. We feel really good about everything that the league and the PA have agreed upon and everything that we’ve done in Cleveland.”

The Browns have had five players placed on the reserve/COVID-19 list for either testing positive or being around someone who has. Punter Jamie Gillan, running back Dontrell Hilliard and Jovante Moffatt have been activated from the list. Berry has been pleased with the small number and is confident starting quarterback Baker Mayfield and other teammates can remain safe even after No. 3 quarterback Garrett Gilbert was placed on the list Monday after spending several days back in the building.

“I’ll again give credit to Kevin and our medical staff in terms of how thoughtful they’ve been in terms of the planning, specifically during this critical first 14 days as we form our bubble, so to speak,” Berry said. “All of our meetings have been virtual up to this point. And with the facility redesign, when our guys really do come back into the building for meetings and various activities, everything is really, really well spaced out and everything is really, really well done to make sure that guys are socially distanced, safe and we will prevent really any issues inside the facilities.”

Billings opts out of season, hurting depth of defensive line

The ease with which the virus can spread and the fallout from a string of positive tests during the regular season has executives and coaches stressing the need for diligence outside team headquarters. Players can be fined and disciplined for violations, including going to bars or attending concerts.

“We all understand that there is a shared responsibility in this thing over the next several months,” Berry said. “As we enter training camp and through the season, we are excited to attack that challenge.

“What we do can impact not just people in the building, but players’, coaches’ and staff’s families, as well. Taking that seriously and understanding that is something we are going to have to be focused on every day, I think Kevin has done a really nice job of consistently reiterating that message on a daily basis.”

The usual evaluation methods have been unavailable to Berry as he prepares to trim the roster he fortified in the offseason. Without organized team activities and minicamps, the offseason was limited to virtual meetings. Practice won’t start until Aug. 14, and roster cuts are due Sept. 5 without the benefit of a preseason game.

While veterans would seem to have an advantage over rookies in the fight for spots, Berry wouldn’t concede the roster will slant that way.

“There are plenty of rookies that can hit the ground running, and they have a great opportunity in front of them to prove that they can catch up quickly,” he said.

The general manager is in the same boat.