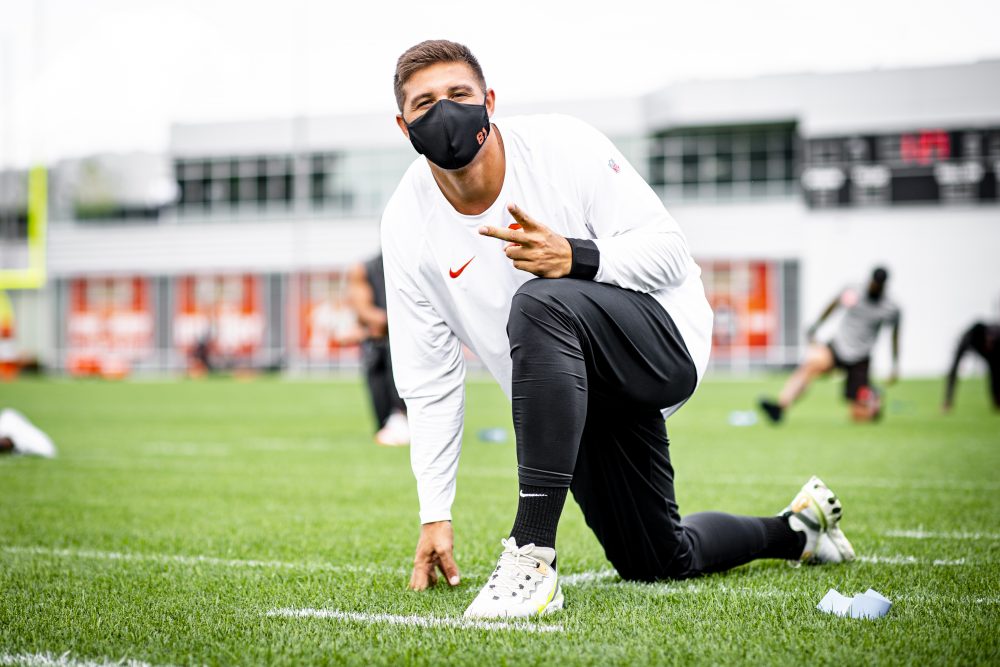 That could prove critical in a season without preseason games and with a limited number of training camp practices.

The work was done during two visits by Hooper to stay with Mayfield in Austin, Texas. They also got a jump on the off-field chemistry that can be tough to generate without an in-person offseason program and with teammates broken into small groups and spread out in the opening stages of training camp.

“I was staying at Baker’s house for like two or three weeks so we had a good time when we were practicing and when we were not practicing,” Hooper said. “I definitely think that was kind of the initial spark that really helped our chemistry.

Hooper signed a four-year, $42 million contract with the Browns in March after two straight Pro Bowl trips with the Atlanta Falcons. Before Hooper agreed to join the Browns, he wanted to know what he’d be getting in the quarterback.

“I was in contact with Baker before I signed, too,” Hooper said. “You just want to get a feel for the person you are going to work with for years. I got in contact with him early on in the process so when I did sign, I already had an idea of where am I going, who is my quarterback and what is he all about.

“I told him that I like to work and I like to do stuff in the offseason. He was more than ready and willing to do that.”

Mayfield is Hooper’s type of quarterback.

“Baker, obviously talented, a strong arm. He has a real competitive fire,” Hooper said. “Those are the two deals that really made me want to sign here were Baker and just his style of quarterback — him being aggressive, has that swag with him, which I do want. I want to play for a quarterback who has that to them a little bit, and obviously the arm talent is there. It was a really easy decision for me.”

The tight ends are expected to be a focal point of coach Kevin Stefanski’s offense, which should give Mayfield easier throws as he tries to bounce back from a disappointing 2019 season.

“Run routes, get open and catch the ball,” Hooper said of his role. “I am sure that will help him out.”

No offseason practices. No preseason games.

“Having less football makes it tough,” Hooper said. “At the end of the day, this is something that is not just us but everyone across the league has to do. In a crazy, messed up way, we are all on the same scale.

“The only way to get better at football is by playing more football, and without as much, especially with a new system, could there possibly be some growing pains? Who knows? The way that Coach Stefanski and the offensive staff have done such a great job of articulating the new offense and teaching it to us, being a new guy in this offense, I feel pretty comfortable already. I am just really excited to get on the grass and get after it when we are able to do so safely.”

Full practice starts Aug. 14, and Hooper said gaining continuity will be the No. 1 goal before the Sept. 13 opener in Baltimore. He said learning how your teammates play can only be done in practices and games, not meetings and walkthroughs.

Hooper was adamant he and David Njoku have a solid relationship despite Hooper moving into the top spot on the depth chart and Njoku asking to be traded before rescinding the request.

Hooper, who attributed the trade request to the business side of football and Njoku changing agents to the high-powered Drew Rosenhaus, said there’s no ill will toward Njoku and he’s looking forward to working with him.

“I have never really been a rah-rah guy at all. I just kind of like to lead by example, and if people have questions, I will answer them,” Hooper said. “I am an open book. I don’t try to hoard information. I don’t like doing the whole Jason Witten deal where it is me versus everyone else in the tight end room. I think it is more like we are all in this together.”

Hooper later tweeted he was being sarcastic regarding Witten.

Building relationships with new teammates won’t be easy in the coronavirus NFL.

“You have to abide by the rules because, first and foremost, we want there to be a season, and the only way we can do that is by being socially distant and by self-adhering to the rules,” Hooper said. “Normally, as you know, we would all go to a restaurant together, grab some pops together and just do guy stuff to just build bonds. Obviously, with everything that is going on, the format is different.

No. 3 quarterback Garrett Gilbert was activated from the reserve/COVID-19 list after being placed on it Monday. He tested positive once in about 10 tests, so it was likely a false positive.

** Guard Colby Gossett officially opted out due to coronavirus concerns. He informed the team Tuesday.

Drew Forbes earlier opted out, knocking two candidates out of the competition to be the starting right guard.