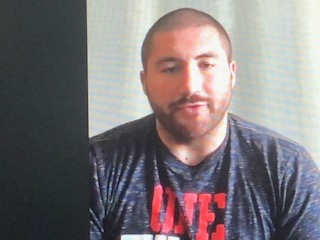 As president of the NFL Players Association, Browns center JC Tretter fought for every player to have the chance to opt out of the season because of coronavirus concerns.

With his new wife, Anna, pregnant with their first child, he had a specific reason to sit out.

Tretter, 29, consulted medical experts, considered the risks and decided to play. He said he won’t opt out before the Thursday afternoon deadline but has made concessions in returning to work during a pandemic.

“I am staying at the hotel right now,” he said Wednesday on a Zoom call. “Just want to make sure everything is running properly and there are no outbreaks. I will stay here until I feel comfortable going back to my house.

“I think everybody has their own unique circumstances, needs to kind of sort through the information and gather more information and then just make the best decision on what they feel most comfortable with.”

Tretter said he didn’t feel obligated to play because he was voted union president in March.

“Obviously our goal was to give guys options and then guys make the best decisions for them and their families,” he said.

Tretter is adamant he’ll never stop fighting for the health and safety of the league’s players, and his latest battle is extending the daily virus testing.

The agreement between the NFL and NFLPA called for daily testing for the first 14 days and then every other day if positive tests came in under a designated threshold. After watching the struggles of Major League Baseball under every-other-day testing and talking to those involved, Tretter wants the NFL to keep the more rigorous schedule.

He blames the lag time in testing for the outbreaks in baseball “because when someone is sick and shedding virus in the building, it sweeps through that place quickly,” he said. “It is extremely contagious, and you want to make sure that the people in the building are not sick.

“Throughout this, there are going to be constant needs to evolve and change and make decisions that are best to keep the game moving forward. We will continue to learn from our errors and other leagues’ errors, and I think that is something we definitely need to look at and definitely need to push for is the continuation of everyday testing.”

Tretter argued the constant stream of tests also makes false positives easier to accept. Kelly Stafford, the wife of Lions quarterback Matthew, was upset when Stafford was placed on the reserve/COVID-19 list and it became public. She said she and her family were treated differently in public and it turned out Stafford’s test was a false positive.

Garrett Gilbert, Cleveland’s No. 3 quarterback, also appeared to have a false positive. He tested positive once in approximately 10 tests and was placed on the reserve list Monday. He was activated Wednesday.

Tretter didn’t want to talk about a specific case but said the daily tests allow false positives to be quickly discovered while keeping players safe.

“I think the protocols are working,” he said. 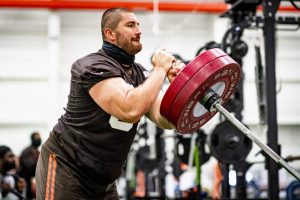 The NFL and NFLPA worked with medical experts then implemented safety guidelines and procedures before players began reporting for training camp at the end of July. Tretter has been impressed with the Browns’ execution of their plan.

“The Browns have done a really great job,” he said. “Walking through the facility, it is like a new building. That way we have the ability to spread out and make sure that we can continue social distancing, even in the locker room.

“They have done everything you could possibly think of. Walking through there, there is nothing I can look at and say, ‘Well, maybe they could have done this.’ They have done a great job.”

Tight end Austin Hooper, who signed as a free agent in March and wasn’t in Berea until last week, is also comfortable with the setup.

“Does any building have it down to 100 percent perfect? I do not know, but I feel very confident in all the things they have in place,” he said, mentioning coach Kevin Stefanski, general manager Andrew Berry and owners Dee and Jimmy Haslam. “There are a lot of safety measures in place, and it is making me feel confident that we can do this at a safe and high level.”

A key to pulling off the season will be players, coaches and staff acting responsibly inside and outside of the building. Teams will be able to discipline, including levying fines, members of the organization proved to have been in high-risk environments such as bars or concerts.

“I think guys were OK with having rules around keeping them out of high-risk environments because guys do not want to get sick and guys do not want their families to get sick,” Tretter said. “Guys can’t get lax. Everybody in the building can’t relax on the protocols or relax on making the right decisions at the facility and away from the facility.”

The offseason was a whirlwind for Tretter. He got married, then was elected union president as a new collective bargaining agreement was about to be ratified by a slim margin of players and the pandemic was set to start. He doesn’t regret running for office.

“I have really enjoyed the work. It is something I have been passionate about for a long time,” he said. “Obviously it has been a busy offseason, but it has been  a really great time kind of fighting for the players and trying to provide them as best of a workplace as possible.”

He’s confident he’ll be prepared for the season — as a player — despite being pulled in different directions.

“Where I am at in my career, I have reached a point where I have a pretty good grasp of what it takes to get ready,” he said. “I know what I need to do throughout the week and throughout the offseason to prepare, have my body ready and have my mind ready to play, so the added responsibilities don’t cause me too much concern.”