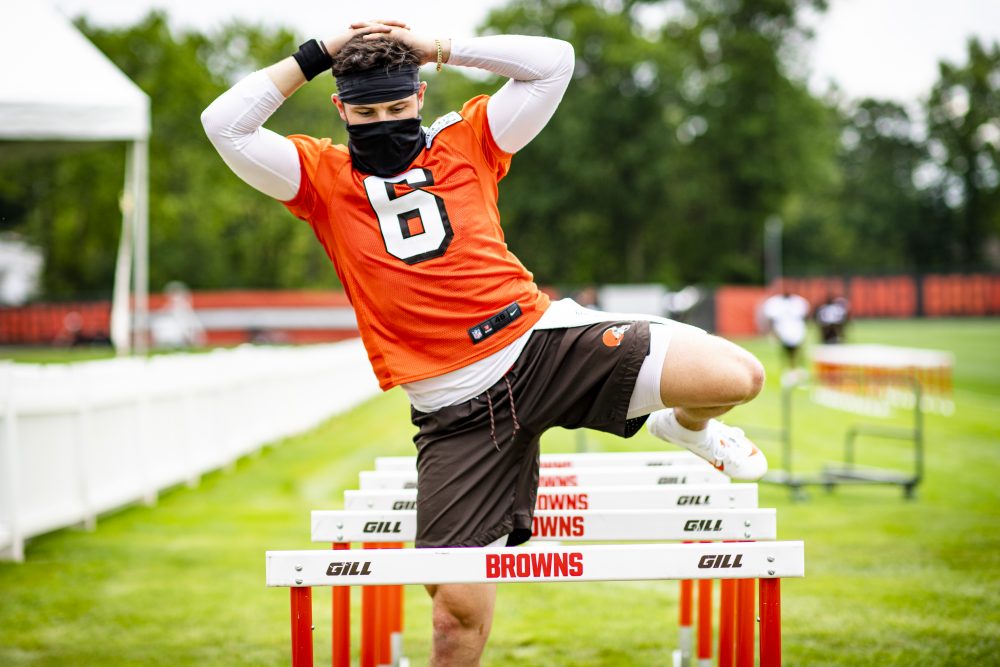 Kevin Stefanski didn’t know a global pandemic was about to shut down the country and prevent anything resembling a normal offseason in his first year as a head coach. He just wanted to get to know some of his players, starting with quarterback Baker Mayfield.

The trip to Texas gained importance when the rest of Stefanski’s itinerary was halted by the coronavirus and he was unable to see Mayfield in person again until last week.

“I went down to see Baker in (February) prior to everything going crazy,” Stefanski said Friday on a Zoom call with reporters, revealing the trip. “That was really our first time to get in person and talk about life and get to know each other down in Austin. From that moment until now I’ve been very impressed with Baker.

“He is all ball. He understands his role, he understands what we want him to do in this offense. He’s doing it on the field, just watching him get through the cadence and line people up. Very impressed with him.”

Stefanski plans to use every offseason to better get to know his players. He values creating relationships and was disappointed he still hadn’t met some until this week.

He will continue to find ways to connect with Mayfield, who’s on his fourth coach in three years since being the No. 1 pick in 2018.

“As everybody knows, the head coach-quarterback relationship is important,” Stefanski said. “I just felt like it was important for me to sit face to face with him, meet his family and kind of get to know each other. That is something that I will continue to do. That was the charge going back to (February), and even now, the charge is we have to get to know each other real quick.

Stefanski joked that beating the shutdown wasn’t part of his travel plans.

“It was very fortunate that the timing worked and I was able to get down there and spend a good night with him,” he said. “It is important for me to get to know the person and get to know the family. They were gracious hosts down there in Austin.”

Stefanski and general manager Andrew Berry inherited Mayfield but have been steadfast in expressing their belief he’s a franchise quarterback and the guy they want long term.

“Baker has really been outstanding this entire spring and summer — level of engagement with the coaching staff, getting up to speed mentally with the system and his interaction with his teammates,” Berry said Tuesday. “He came back and added 4 pounds of lean mass, cut body fat and came back in terrific shape.

“We are all really excited about him entering the year.”

The body transformation meant a lot to Stefanski.

“It’s really impressive,” he said. “He did a nice job. And that just doesn’t happen. There’s a lot of work that goes into that, and he clearly has done the work.”

Although players and coaches are back in the building, establishing chemistry remains a challenge following the entirely virtual offseason program. The players have been divided into two groups for conditioning and walkthroughs and social distancing remains a priority, but Berry complimented Mayfield on “creating community.”

“That position, your job is to make other people better, No. 1,” Stefanski said of quarterback. “In order to do that, you really have to get to know guys and you have to know what makes them tick. I think one of his strong suits is understanding his peers, his teammates, and he works at it. That is definitely a strong suit of his.”

The table seems to be set for Mayfield to have a bounce-back season. He never appeared completely comfortable in 2019, whether it was the disorganized offense under the former coaching staff, the lack of timing with injured receivers Odell Beckham Jr. and Jarvis Landry or a distrust of the protection from the offensive line. He regressed to 22 touchdowns, 21 interceptions, a 59.4 completion percentage and a 78.8 passer rating.

Stefanski said the disappointment of last season came up in their Austin visit.

“When you spend as much time as you spend with somebody in a day like that, you cover all of the bases,” he said. “I will tell you, from that moment until now, I see a very committed football player who is ready to lead and who is excited to play.

“I go back to I think Baker is a really good teammate. I think he really understands his teammates. I think his teammates play hard for him. That just goes back to that thing he has that nobody can put a finger on and that the quarterback position has to have. You have to have ‘it.’ You have to make sure you bring your guys along. The No. 1 job of a quarterback is to make the guys around you play better. There are a bunch of ways to do that. It is like the point guard on a basketball team. I just think Baker has embraced all of that since the moment he and I have gotten to know each other.”

The organization and Stefanski have encouraged players to take an active role in the fight for social justice, and Mayfield has stepped up. In addition to fighting for specific causes, Mayfield was definitive that he’ll kneel during the national anthem to call attention to the racial injustice that remains prevalent in the country.

“I am proud of all of our guys that have done the research, have educated themselves and have been very thoughtful about their actions and about their words, and Baker certainly fits into that category,” Stefanski said. “Someone who is passionate, but he has listened before doing. I think that is so important.