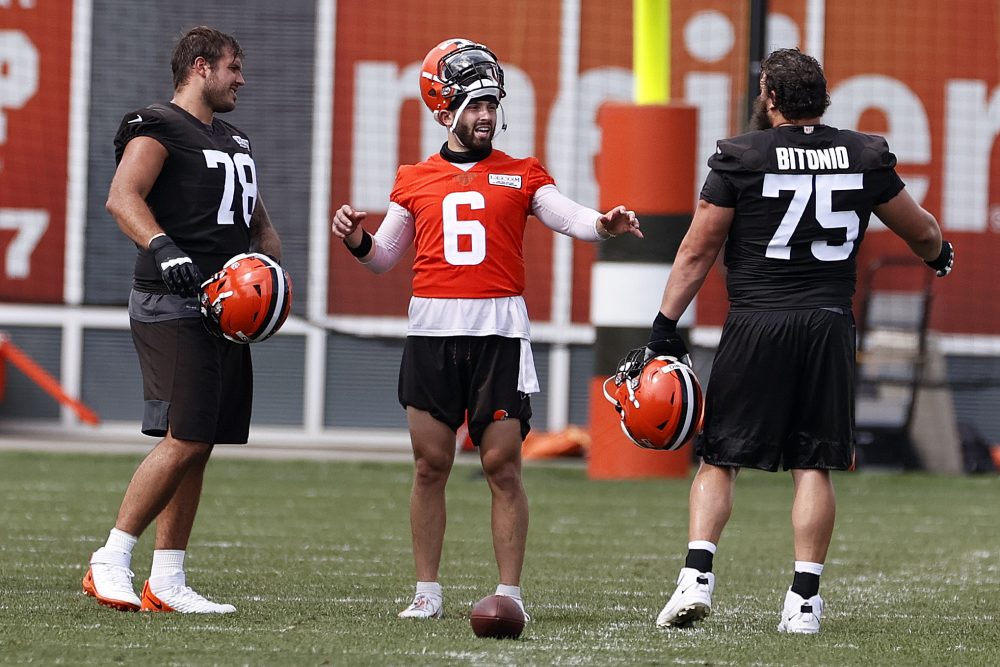 Just as important as the better physique is the improvement in his psyche.

“In a much better state mentally. Obviously physically I put in the work,” Mayfield said Friday before the first official practice of training camp. “Just ready to roll, attack and get back to where I need to be to be the leader for this team and for this franchise. The reason I got here is because I have been myself and have been able to attack each day with 100 percent effort.”

As the losses mounted, the coaching changes continued and the interceptions kept coming in his first two seasons, Mayfield was struck by the realization he wasn’t the same player.

Or the same person.

“Having success all through high school and college and having that standard so high and then the past couple years have been a roller coaster of emotions and not nearly as much success as I am used to,” said Mayfield, who won the Heisman Trophy at Oklahoma. “I would say I lost myself not having that success, not finding out what was working. I tried different ways of trying to have that success, and I didn’t find it.

“I lost myself in that, and I wasn’t able to be who I am for these guys on the team.”

Mayfield is known for having a stockpile of swagger but admitted he “absolutely” doubted himself during the struggles last year, as he threw 22 touchdowns and 21 interceptions after setting an NFL rookie record with 27 touchdown passes after being drafted No. 1 in 2018.

“There were times — and these guys know that everybody has their moments — you can’t just hold onto yourself. You have to have people to lean on, and we have those guys here.”

Mayfield dropped body fat and added 4 pounds of lean muscle, according to general manager Andrew Berry. Mayfield said he worked with a dietitian and has cleaned up his eating habits — he cut back on Mexican food — in addition to his regimen with a trainer.

He felt the change was necessary after playing at his heaviest last season, when he said he couldn’t work out as much because he was “beat up.” He believes he’ll be better scrambling and moving inside the pocket. He also sees the benefit of being quicker as Stefanski’s offense relies on play-action passing and bootlegs.

Mayfield, who was also asked to change his footwork by new coordinator Alex Van Pelt, looked spry during the first full-squad workout. He took off up the middle on one scramble and slid before a defender could get near him.

“That is my job to be in prime physical shape to show up and do my job on Sundays,” Mayfield said. “Look good, feel good, play good.”

Notes: Center JC Tretter has knee surgery, out for start of training camp

Receiver Jarvis Landry was Mayfield’s favorite target in both his seasons and said “it means everything” that Mayfield returned ready to go. Mayfield looked back to himself during practice, enthusiastically kicking his leg and strumming an air guitar during a country song.

Stefanski got to know Mayfield during a trip to his home in Texas in February and said the time he spent on footwork is obvious.

“I have seen a guy that has taken this job seriously and making sure he is ultra-prepared for the job,” he said. “Really like where Baker is at from a schematic standpoint, from a physical standpoint and definitely from a mental standpoint.”

Mayfield is encouraged by Berry’s offseason additions — right tackle Jack Conklin, left tackle Jedrick Wills and tight end Austin Hooper — as well as the culture change under the new regime and the scheme being installed by Stefanski.

“My attributes match up to what they want to do. Not only that, I think it matches up to our team and the people they have brought in,” Mayfield said. “Our whole offense, just mentality-wise, culture-wise and a no-BS policy, you are going to know exactly what we want to do and you are expected to do it. It is just a being an adult type thing. Handle your business, and we will have success and we will have fun doing it.”

Mayfield has never shied away from taking a leadership role, and this offseason that included stating clearly he’ll kneel during the national anthem to protest racial injustice. He received some backlash but hasn’t backed down.

“I don’t have any regrets,” he said. “Being in my position, which is a blessing, being out on a platform to where I can speak on issues that are just wrong. Right is right, and wrong is wrong. There is a human rights issue that has been going on for a long time, and I believe in that.

“It is nothing against military or anybody who served. Anybody that knows my history knows that I completely support military and the people that serve our country for the right reasons and do it for justice.”

“Obviously everybody hopefully recognizes the problem and understands that there is a problem that is going on,” he said. “From a professional athlete standpoint, we understand our platform, and being able to use that on the biggest stage is something that can continue to keep conversations going, continue to raise awareness and continue to call things out.

“Much respect to him for that. I texted him and I told him respect for that.”

Nick Chubb aims for rushing title this season, has extra motivation after losing it in finale last season
Rookie safety Grant Delpit doesn’t know what role he’ll have but going “warp speed” to be ready for Week 1 vs. Ravens