Haslams hopeful season can be completed and some fans can attend games, urge everyone to do their part by wearing masks 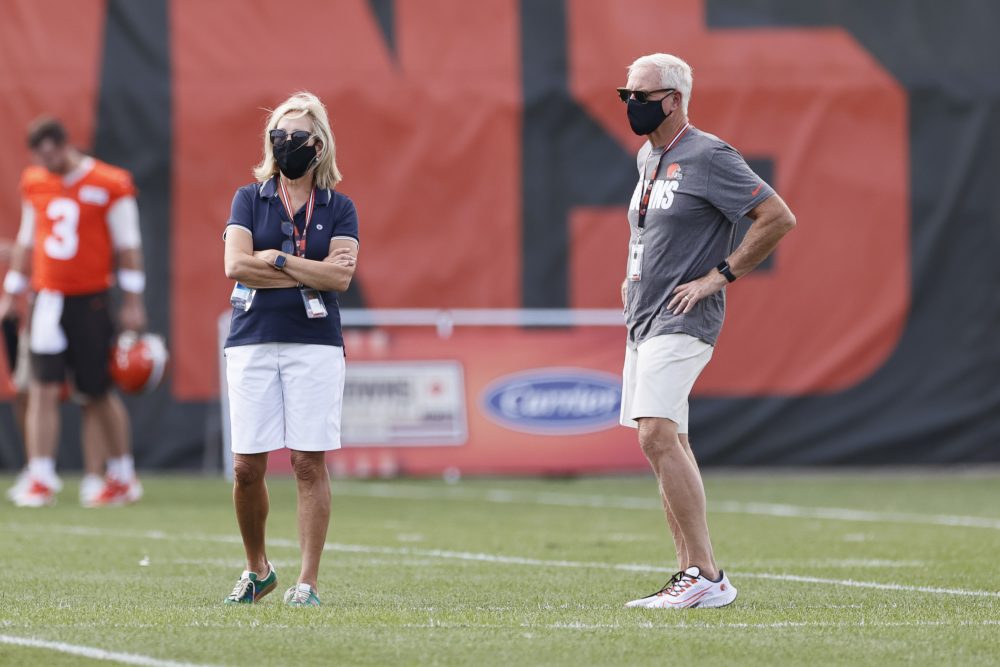 BEREA — Owners Dee and Jimmy Haslam have soaked in the start of training camp, watching practice from the grass and participating in a team meeting to build chemistry.

As happy as they are to have the coaches and players back inside Browns headquarters, the Haslams know the work toward completing an NFL season during the ongoing coronavirus pandemic has only just begun.

“It has been challenging, but we are excited now to be on the field,” Jimmy Haslam said Sunday on a Zoom call after practice. “None of us know if there is going to be a full season, but we are going to do everything we can to get a season in, but do so in a safe manner.”

Both Haslams stressed that it will take a community effort to ensure the NFL, and even high school football, can proceed. Jimmy Haslam ended the interview by calling for everyone to wear a mask in public and practice social distancing.

“We do feel a lot of pressure, but we also need everybody else to help out or we can’t do it,” Dee Haslam said.

Camp has looked like it normally does — with the exception of the Haslams, coaches and staff wearing masks — but Jimmy Haslam noted it’s “eerily quiet” without fans permitted.

“Just really strange and miss our fans so much,” Dee Haslam said. “I am sure the players do, too.”

The Haslams have submitted a plan to the state that would allow about 20 percent of capacity (approximately 14,000 fans) to attend games at FirstEnergy Stadium. A task force among Ohio State, the Indians, Reds, Browns and Bengals has worked closely with the governor’s office for the last couple of months regarding allowing fans, and the Haslams feel they’ve put the necessary safety protocols in place.

“Obviously the final decision is up to the governor, but we are ready and excited to go, and I think the city of Cleveland feels the same way,” Jimmy Haslam said.

If fans are in the stadium, they will see quarterback Baker Mayfield and teammates kneel during the national anthem to protest social inequality. The death of George Floyd at the knee of a Minneapolis police officer and other examples of racial injustice have again sparked outrage across the country, and Mayfield has been adamant he’ll kneel.

“One of the great things about this country, one of the many great things, is the ability to have freedom of speech and being able to express yourself, so we are going to support our players,” Jimmy Haslam said. “At the same time, I think all too much attention is called to whether somebody kneels or stands or what their statement is and not nearly enough attention is called to what they do afterward. Dee and I can issue some great statement, but what you all really ought to look at is what ourselves, our coaches and our players are doing the rest of the week, if you will, to make this country a better place to live, work and raise a family.”

He said the organization is prepared to deal with any backlash — “we are going to be fully supportive of our players” — and encouraged the country to have “a lot more thoughtful dialogue” around the issues. Dee Haslam called for the return of respect in the discourse.

Coach Kevin Stefanski said the Haslams have been involved in the team’s discussions about promoting and improving social justice.

“I just think they are very supportive in all avenues, but it is certainly a place where they let the team know that they want to be part of the solution,” Stefanski said.

Jimmy Haslam hopes to manage expectations after last year’s avalanche of preseason hype was followed by a 6-10 record, but he likes the direction of the organization and believes the key decision-makers are aligned in philosophy.

“We talk at our business about RPRP — right people in the right place,” he said. “It has been a long, hard road, but we really think we have that in coaching, personnel, Paul (DePodesta, chief strategy officer) with his strategic role and in players, whether it be Baker or whomever.”

The Haslams followed the hiring of Stefanski in January by bringing back Andrew Berry to be general manager. Neither had been in his role before, then had to navigate a completely virtual offseason due to the pandemic.

“They are both like really calm. Their EKGs are just like that,” said Jimmy Haslam, illustrating with a flat, stable hand. “Second of all, they are really organized. They are good at processing. They are both smart.

“What I appreciate the most is neither of them use COVID as an excuse. Kevin can easily do that, right? First-year head coach, new staff, new offense, new defense, etc., and he has not used it as an excuse.”