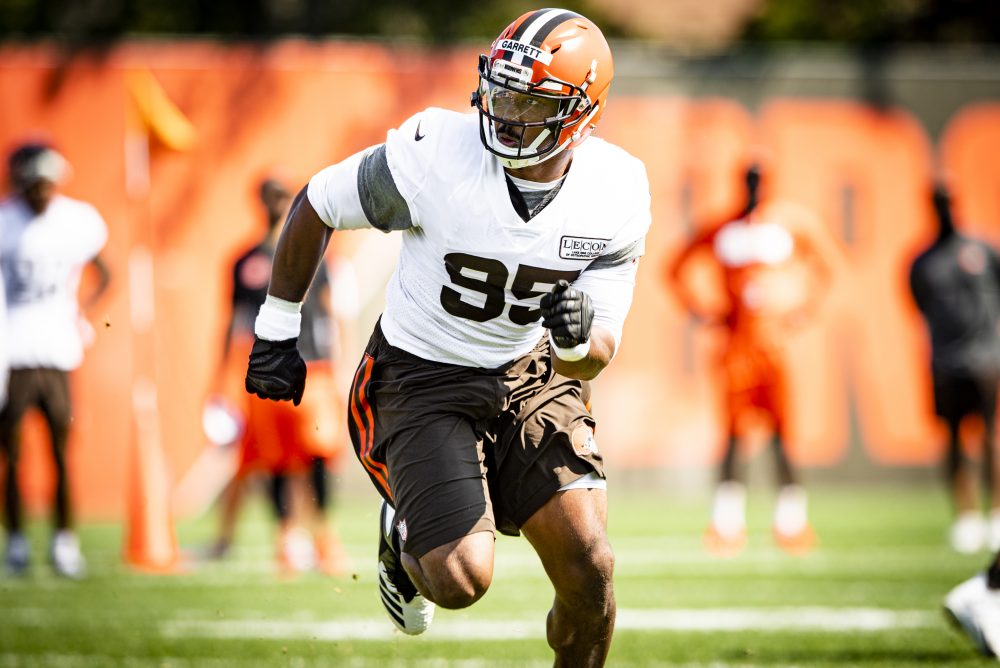 Garrett participated in team drills Saturday for the first time in training camp. He missed the first five practices with a strained hamstring then was limited to individual drills Thursday.

Garrett lined up at left defensive end Saturday so he didn’t match up with Wills, but his normal spot is on the right side, where he’ll put Wills to the test in 11-on-11 and one-on-one drills. Veteran end Olivier Vernon has battled Wills through the first week-plus of camp.

“I would just like to introduce him to the NFL and how things are going to be,” Garrett said Saturday before practice. “He is going to have a tough matchup against me and OV, but whenever we beat him or whenever we get one over on him, I do not want him to get discouraged or put his head down.”

From the sideline Garrett noticed a change in Wills, the No. 10 pick out of the University of Alabama, when he would get beat by Vernon.

“He would get beat once to twice. Just try to pick his head up,” Garrett said. “‘Hey, focus on the next play. This guy has been in the league for a long time for a reason. He knows how to play the game. He knows how to rush the passer. You can’t get discouraged from one drive. You are going to have multiple more, and this could just be the one where he got you and you could go on to protect the quarterback perfectly for the rest of the game. So do not allow these couple plays to keep you from getting where you want to go.

‘This is just training camp and you have a long season. You can improve from today all the way to there, and end up like one of the guys who only gives up one or no sacks throughout the year. Just grow from that moment, and if you need any tips, I will be here.’”

Don’t get the wrong idea. The compassionate, sage advice doesn’t mean Garrett will go easy on Wills to prop up his spirits.

“Oh, no. Nobody ever learns when you dial it back,” Garrett said, noting he’ll share tips after practice. “I am going to give him whatever I have so he can get that feel of a good defensive end coming off on him and what he is supposed to be on him.”

Notes: Kevin Johnson out of hospital; Nick Chubb back practicing

The Browns haven’t wavered in the plan to start Wills at left tackle in the opener Sept. 13 against the Ravens, even though he played right tackle in high school and college, didn’t have offseason practices and won’t have preseason games to prepare. Despite any early struggles, coach Kevin Stefanski believes Wills is on track.

“He is getting a lot of good reps versus Olivier Vernon, who is a very good player,” Stefanski said. “He is doing a nice job, and I think he is progressing every day. He is working on technique. He is taking things from the classroom to the field.”

Garrett was bored watching the action in the trenches after hurting the hamstring “just running.” He said it was the first strain he’s had.

“It was out of the blue,” he said. “I kind of knew when I did it because I had never felt anything like it. It felt uncomfortable.

“I got over it pretty quick and I am hoping to get in on what the guys are doing on the defensive side.”

#Browns Myles Garrett (hamstring) in a pass-rushing drill. Expected to do some in team drills. pic.twitter.com/praE6WlIeu

He’s not concerned the injury will linger or affect him in the regular season and has lofty goals in his return from the six-game suspension to end last season.

“No matter how well I do, if we are no good, nobody will remember my season or what any of us did upfront. I want us to ultimately have a stellar year as a defense, get to the playoffs and make a run. That is what I want to do.”

The Browns trust Garrett, the No. 1 pick in 2017, to be one of the guys to lead them back to the playoffs for the first time since 2002. The commitment was cemented when the Browns gave Garrett a five-year, $125 million extension in July. His status as the highest-paid defender in NFL history lasted less than two weeks, as Chargers end Joey Bosa signed a $135 million extension.

“My parents always told me never worry about someone else’s money,” Garrett said. “I have mine, and I am filling the role of what I need to do on this team. They know my value, and I know my value.

“All praise goes to Joey for what he has done and how great and productive he has been at the Chargers, but I just have to play my game and try to do it to the best of my ability. I know I can be among the very best in the league, and he has the ability, too. That is the competition right there. It does not have to go monetarily at all. I do not pay attention to that. When I see him, I just get fired up because I like the way he plays. I think he rushes the passer well. He plays the run. He chases down the ball. I love what he does, him and his brother (Nick). I would love to go head to head.”