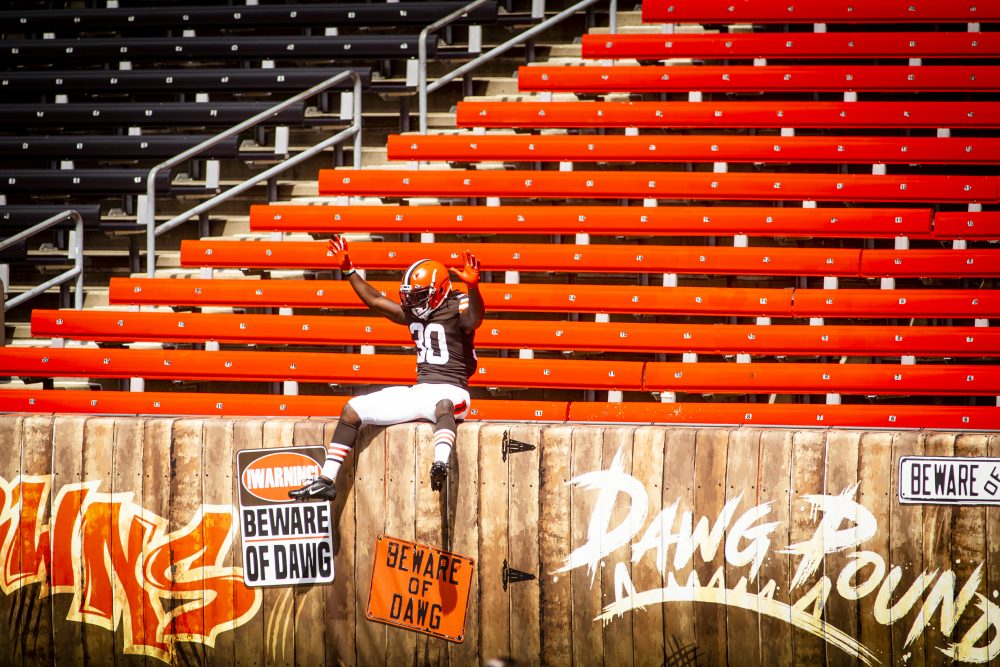 “REAL” FOOTBALL: The setting of FirstEnergy Stadium gave the practice a different vibe, and the tackling made it feel authentic. Coach Kevin Stefanski had the first “live” tackling of camp during a move-the-ball period that covered 15 minutes of game action. The first-team offense went against the second-team defense and vice versa, and the Orange (second team) prevailed 14-10 with backup quarterback Case Keenum leading the way with two touchdown passes.

NEWS OF THE DAY: Before the start of practice, quarterback Baker Mayfield, receiver Jarvis Landry and defensive Larry Ogunjobi read a statement on behalf of the players identifying the areas where the organization will work to become an instrument for social justice change: education, police reform and accountability, economic advancement and community support and non-partisan voter registration, education and turnout.

CAMPER OF THE DAY: Tight end David Njoku returned to team drills after missing time with a sore wrist and reminded his doubters of his massive potential. He had a 65-yard catch-and-run on a pass from Keenum to start the “live” period, taking advantage of a defensive breakdown. Njoku also got time with the starters — Austin Hooper didn’t play in the “live” period — and caught a 14-yard out from Mayfield and an 8-yard out on fourth-and-1 that set up a 1-yard touchdown run by Kareem Hunt.

CAMPER OF THE DAY II: Running back D’Ernest Johnson was the star on the second offense’s second touchdown drive. He had rushes of 12 and 4 yards, a 13-yard reception and a 5-yard TD catch. He jumped into the empty first row of the Dawg Pound.

PLAY OF THE DAY: The first-team offense had the ball at the 10-yard line and needed a touchdown to win. Mayfield looked for rookie receiver Donovan Peoples-Jones near the goal line, but the throw was behind and undrafted rookie safety Jovante Moffatt intercepted it to set off a celebration by the defense and end practice.

QUOTE OF THE DAY: “Good to see David back out there. He got lost in the defense there on that first play and made an explosive play.” — Stefanski on Njoku.