Mailbag: How’s Jedrick Wills doing as a run blocker? Should Jack Conklin and Wills switch spots? How’s the depth at linebacker and in the secondary? 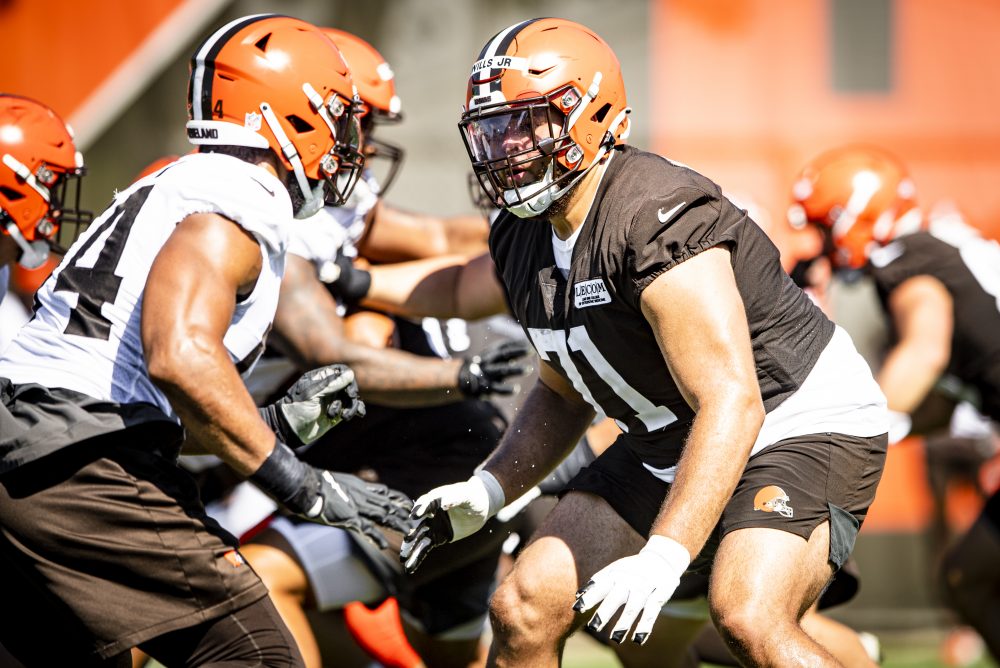 Q: It does not take much reading between the lines to conclude that rookie left tackle Jedrick Wills is struggling a bit at this early stage. Nothing surprising about that, no need to panic, I think. One thing I am curious about, I have not seen any color on how his run blocking compares to his pass blocking, any insights there?

A: You read correctly between the lines. Wills has clearly struggled in pass protection as he makes the transition to the left side after playing right tackle in high school and college.

I’m not an expert on run blocking and must admit our view at practice hasn’t been the greatest given the COVID-19 restrictions, but I feel comfortable saying Wills has been better in the run game than the pass game. But he’s also been inconsistent there. I’ve noticed plenty of occasions where defensive end Olivier Vernon penetrated to blow up a run.

I still have great confidence in Wills’ overall ability, I’m just not convinced he’ll feel comfortable at any point as a rookie. I do think he’ll figure out the run game first, because it requires less technique adjustment and he proved at Alabama he can move in space and bury defenders. It wouldn’t be a surprise to see coach Kevin Stefanski lean on the run early in the year as Wills and the rest of the passing game find their footing.

Q: Is it bad enough with Wills that right tackle Jack Conklin may have to switch with him?

Stefanski made it clear — again – Saturday that no matter how poorly Wills does in training camp he’ll be the Week 1 starter at left tackle against the Ravens. Stefanski said this after watching Wills for a month, so he’s seen enough to be somewhat comfortable.

I don’t think Wills has been bad enough to overhaul the plan along the line, but the reality is the Browns don’t have many options besides the athletic rookie. Conklin hasn’t played left tackle since his days at Michigan State, and Chris Hubbard and Kendall Lamm are more suited as backups or right tackles. If Wills turns out to be a disaster in the regular season, Conklin to the left and Wills to the right could be the best alternative, but it’s far from a good one.

I don’t expect it to come to that. Stefanski will surely give Wills help early in the season, lining up a tight end or two on his side, or asking a running back to chip the right defensive end.

Q: Although he’s been filling in at center, are there any plans to give Nick Harris some reps at right guard once JC Tretter is back?

There’s no such thing as strictly a backup center in the NFL — the roster isn’t big enough. So when Tretter returns, Harris will get time at center and guard in practice.

All the first-team reps at center for Harris without Tretter available in camp will prove invaluable when he eventually becomes a full-time starter, but a negative is a lack of snaps at guard. I don’t think Harris would’ve beat out Wyatt Teller at right guard, but it would’ve been interesting to see if Harris would’ve made a push for the starting job.

Q: How is the depth in the secondary and linebackers looking? Should fans be concerned with either situation, or are you seeing quality play so far? Who’s been stepping up with these injury situations?

A: First-time general manager Andrew Berry did a good job adding depth across the roster during the offseason, but I always felt linebacker was the position he neglected. That choice/oversight was further exposed when Mack Wilson went down with a hyperextended left knee Aug. 18.

B.J. Goodson and Sione Takitaki have become full-time players even though pass coverage isn’t their strong suit, and rookie Jacob Phillips will likely be forced into the starting lineup. Goodson has been a pleasant surprise with his vocal leadership and playmaking ability, but it remains to be seen if he can handle an every-down workload and hold up in coverage. Wilson hopes to return in about a month, but the doubts at linebacker will linger. Berry signed veteran Malcolm Smith to add depth and experience, which was a good idea given the lack of quality options after the first four on the depth chart.

The secondary has better depth, but the season-ending Achilles tendon rupture of rookie safety Grant Delpit might send Berry looking for a replacement. Andrew Sendejo and Sheldrick Redwine may prove capable of holding down the second and third safety spots, but that seems a notch high for both. Berry could be tempted to try to sign veteran Logan Ryan to step into the starting lineup beside Karl Joseph.

Cornerback has taken multiple hits with Greedy Williams (shoulder), Kevin Johnson (lacerated liver) and M.J. Stewart Jr. (hamstring) still sidelined. Losing the Nos. 2 and 3 corners (Williams and Johnson) is brutal for any roster, but at least the Browns have volume in Terrance Mitchell, Tavierre Thomas, Donovan Olumba and A.J. Green. And all three of the injured are expected back sooner rather than later.

Q: Who are you voting for for the Maurice Bassett Award? Also, what’s the history behind the award?

A: The Bassett Award is given to the rookie who performs the best in training camp. It was named in 1985 in honor of running back Maurice Bassett, who played for the Browns from 1954-56. Without preseason games, practice is the only criterion this year.

Wills hasn’t been good enough and Delpit got hurt too soon, so the precamp favorites are out of the running. Harris has been solid and Phillips fine, but the choice is between fourth-round tight end Harrison Bryant and sixth-round receiver/returner Donovan Peoples-Jones.

I’ve become a big Peoples-Jones fan and think he’ll contribute as a rookie, but Bryant has made too many plays to ignore. He’s caught just about everything thrown his way, holds his own when given first-team reps and should add his name to the list of Bassett winners.

Mailbag: How’s Baker Mayfield looking in camp? What about Jedrick Wills? What’s the plan at linebacker?
Mailbag: How will Kevin Stefanski’s personality translate to success? Will Mack Wilson be back soon? Will team be significantly better by 2nd half of season?